No slots? No expanded gaming? The State's Legislature gotcha down?

Perhaps there is an alternative ...

The fine folks of Churchill Downs have been sending me a multitude of emails the include photos and workouts and jockey standings and trainer standings and owners standings and OSHA violations and a recipe for Mrs. Asher's famous Double Chocolate Mousse Pie. Okay, I made up a couple of those items. But the fact remains, that somehow I got finagled onto Churchill Downs' press releases (read: spam); doubtful that it's because of my turf writing expertise but probably because I extol the praises of the Churchill Downs Director of Communication who used to be the Lone Star Park Director of Communication (and don't we miss him 'cause he's a great guy!), Darren Rogers. Which reminds me, I once inquired to Darren about Lone Star's cool 10th Anniversary Posters that were displayed around the grandstand but never received a resolution before he left for Churchill Downs. And I even had wall space in my foyer for one of 'em!

Anyway, according to a recent Churchill Downs' email alert,

Churchill Downs is promising cheap beer, short lines and great racing to fans who return to the historic home of the Kentucky Derby for the second ‘Downs After Dark” night racing program. Beer prices during extended “Friday Happy Hours” have been lowered to $1 and Churchill Downs will double its number of beverage stations and triple its staff members at those stations throughout the track to ensure that night racing fans will obtain their drinks quickly and at a great price. 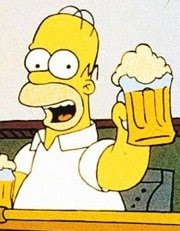 That quote is like Magic Eye. What'd ya see?

Churchill Downs' first "Downs After Dark" elicited over 28,000 people. Betcha they sold about $110,000 in beer. And, in turn, that would increase on-track handle!

Cheap Beer and Cheap Woman-the answer to every man's problems

I don't know about the beer but you can sure count me and Sue in for a $1 Margarita, or two, or three...