Look at your calendar, silly, it's the day after tomorrow.  No, not the silly movie, silly!

According to Lone Star Park's Facebook site, a not-so-scientific poll was conducted regarding one's favorite thing about Dollar Day at the racetrack.  And what scientist, statistician, brewmeister, or  beer-swilling-horseplayer doesn't break into a big, dumb grin when presented with this graph: 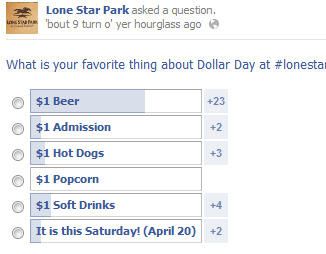 If one can remember, the Dollar Beer has been a trifle gauche.  Last year, the racetrack partnered with Lone Star Beer.  Now, I'm not an individual that would blasphemy any product attached with the language "Lone Star".  However, with Lone Star Beer, I shall make an exception.  Even for a dollar, it's not an attractive beverage!  So this year, according to LSP Facebook page, it appears that we have a new friend for Dollar Day: 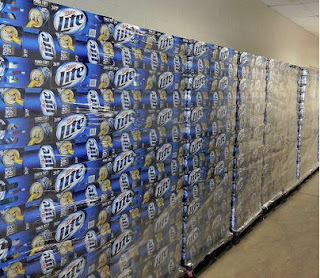 Live racing and events are sponsored by our good friends at Miller Lite!

An unusual observation:  Information from Lone Star Park is not forthcoming.  It could be because (a) local newspapers are not in the business of publishing information about anything "not Tony Romo", or (2) Drew Shubeck is busy playing Sudoku.

Regardless, I spent most of the weekend at the track, watching/betting the races and trading observations with the rail-folk.  I don't have the attendance figures nearby (next to my martini ...) but I estimate there must've been something like 254,487,993 over the weekend, give or take a few million.  My not so-scientific estimate is based solely on the line to my favorite margarita bar in the grandstand.  The line was obscenely long ... for a mild (78 F) North Texas Day.

For those of you unable to comprehend my logic estimation, I shall illustrate it in easy-to-understand gridiron fashion: 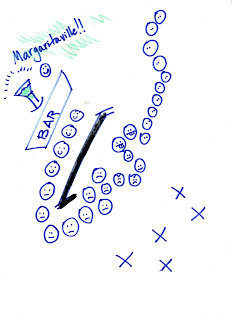 It was a lovely weekend in North Texas and people showed up for concerts and for racing.  Details may or may not be forthcoming about silly things, like handle and what-not.  Okay, truth be told, I don't care about the Randy Rogers Band or Gary Allan or any other "Red Dirt Band" they book to increase the gate and pack the apron.  I'm an old [Fill in the blank] that wants to make some fun bets and check my handicapping prowess and maybe come home with a couple extra bucks.  However, when the 2nd race on a Friday night is a 5 1/2 furlong $7500 maiden claiming affair with a whole whopping 6 entries - ICK!!  Yeah, I would a prefer a concert, too!


And, of course, an Original Butt Sketch .. that's my Alice. 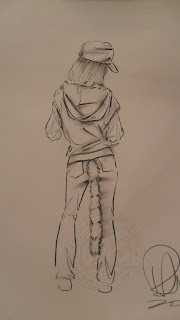 And yes, she's wearing a tail ... because she's a little kid and she can!

We're On Our Feet! Opening Night at Lone Star Park!

Rumors have been circulating for awhile ... updated Silks dining, new racing surface, a state-of-the-art infield jumbo-tron that's capable of bringing tears to your eyes.  Changes!  Improvements!  A return to the original (and correct!) color of frozen margarita!

One glance - it's love at first sight!

The infield tote board and its accompanying brand-spanking-new 17 x 60 foot video screen is a monument to every techno-geek and couch potato everywhere.  The jumbo Jumbotron - or the Dak RT, as I was corrected earlier this evening - has the ability to show two video feeds at the same time.  For each live race, we're treated to a head-on view and a pan view.

Dak RT:  First winner of the evening!  Additionally, they should name a drink for it, too.

Another change:  All the apron box seating is gone.  Personally, I like having a a wide open apron; perfect for milling around and pushing oneself up into a myriad of people along the rail.  The seats worked well as reserved seating at the 2004 Breeders' Cup in October.  But let's face it, in June and July in North Texas, when it's like 218 F, you can't sit on those hot tamales on racing days!  Talk about Butt Burn!  Ouch!  Instead, there is a smattering of new picnic tables adorning the prime real estate by the rail.  And probably quite moveable; get them out of the way for their collections of concerts when the apron is packed with 428,334 Randy Rogers Band fans [Friday night].

However, more than one person grumbled about the lack of free outdoor seating.  I mean, everybody needs some place to set down their beer and/or nachos to look at their racing program.  So, as a concerned racing citizen, we need to launch a campaign for said individuals:

Those little fold-up camping chairs are dirt cheap.  So to my rail-folk compadres:  Keep a camping chair handy in the trunk of you car.  Much like you would an umbrella.  Or spare tire.

And yes, there was a horse race or two.  The first race of the card - nay, the season - in the $50,000 Premiere Stakes.  Triumph and Song, a 4-year-old gelding trained by local-boy-done-good Bret Calhoun, won his first stakes race easily under jockey Jamie Theriot.  I even won a couple of bucks, which I plan to put towards my camping chair.  Or beer.