Meet Concludes With Remix of the Same Song

Sunday evening, Lone Star Park concluded its 2012 Spring Thoroughbred Meet and Musical Extravaganza Spectacular. And judging from the final numbers - average daily handle down 7% with a 4% decrease in attendance - racing wasn't exactly rockin' anybody.  Fortunately, Lone Star Park President and General Manager, Drew Shubeck, was able to use one of his ol' reliable quotes,

"We're disappointed with the results."


In addition to the 7% live handle decline, the off-track, export handle took a solid hit: down 12%.

“We continue to be disappointed in the simulcast out number. This decline is a signal that the national simulcast customer is telling us they are not interested in our product offering.”

Of course, there's the usual reason for lack-luster fields and handle declines:  Slots.  And, coincidentally, there's a Drew Shubeck quote for that!


"A lot of tracks like us that don't have the benefits of slot machines struggle to be competitive."

Slots. VLTs. Racinos. Expanded gaming.  Whatever verbiage you want to use, slots have been proclaimed the cure-all for horse racing's woes.  Bolster the purses from monies generated by one-arm bandits and all the good horses will want to come and everybody will bet.  Well, this is Texas.  I assure you, if Texas politicians don't give a crap about education or providing health care for the poor, they certainly won't give a crap about the horse racing industry.

There were a couple of so-called "bright" spots to the season.  The Lone Star Music Series was popular entertainment event, representing 33% of total attendance.  Of course, as I previously observed, there is not a direct proportion between concert attendance and increased live handle.  But hey, if the gate brings in the funds to pay the light bills, then maybe it's not such a bad thing.  Toss in the fact that people purchased and consumed copious amounts of beer at $5.75 each, the racetrack probably made a ton of money at the concerts.

Other "bright" spots:  Nates Mineshaft ships in, easily wins the Lone Star Park Handicap (gr. 3), and is crowned Horse of the Meeting without so much as breaking a sweat; a Texas' favorite, Clarence Scharbauer Jr's Coyote Legend runs in the Assault Stakes for third year and posts a second victory; jockey Cliff Berry becomes Lone Star's all-time leading rider and adds his fifth riding title, all before he receives his AARP membership next month; Danny Pish notches his first training title at Lone Star Park; the popular Bar & Book and its wide selection of draft beers.

Without a doubt, Lone Star Park and its owner Global Gaming Solutions certainly have their work cut out for them.  Naturally, there's a Drew Shubeck quote for that, too. 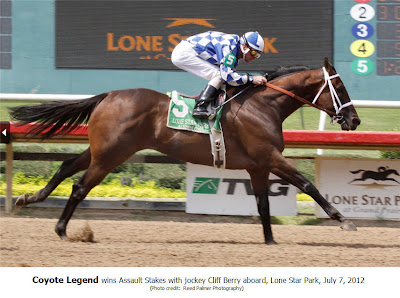