TBA Affiliated With Some Long Odds

Yesterday, there were a couple of noteworthy longshots. No, no, no ... I didn't win anything, although I wish I had. But what makes these interesting is that there is a direct relationship with a few TBA members.

Highland Cat, who at one time had a close and personal relationship with Genius Alan, won a $12,500 claiming race at Gulfstream. He went off at 28-1 and, rumor has it, paid Frank Stronach's drinking buddy, John, a handsome $58.00 on the win.

And while John was busy gloating, a few miles away along the Gulf Coast, a 5-year-old mare, Elliecat (Crafty Prospect - Sage Cat by Tobasco Cat), won the $60,000 Chou Croute Handicap at the Fairgrounds Race Course in New Orleans. Elliecat, trained by Dallas Keen who happens to be married to the very fashionable Donna Keen who happens to write her own Thoroughbred Race Horse Blog which happens to be part of the TBA, went off at 70-1 and paid $159.40 to win! Congratulations! 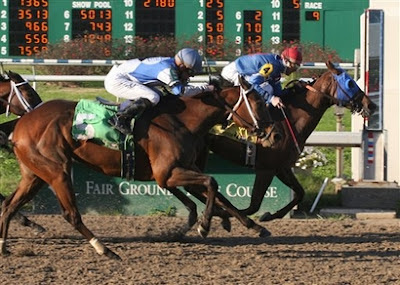 The Breeders’ Cup Host Site Selection Committee, which also serves as the Committee to Elect Our Man Denis Kucinich, is so impressed with the quality of racing on Santa Anita’s new Cushion Track that not only is it anxiously anticipating the 2008 Breeders’ Cup World Championships to be held there, that last week it awarded the 2009 Breeders’ Cup to Santa Anita as well.

According to a news brief posted on the Breeders’ Cup website,

The decision followed a lengthy review process ... which included discussions with multiple racing venues in different regions. The committee’s recommendation was unanimously approved by the Breeders’ Cup Board of Directors.

This statement should raise a red flag to anyone who has command of the English language. It’s the use of the word multiple. Let’s have a little discussion about the use of this word.

Multiple is an adjective which means "consisting of, having, or involving several or many individuals, parts".

According to various reports as well as my most reliable and exceptionally intelligent super-secret source, there were probably only two venues even under consideration: Churchill Downs and Santa Anita.

My understanding is that it was that after Monmouth the BC wanted to go back to a big venue and there were only really 3 options: SA, CD or Belmont. With Belmont out due to Nyra franchise issues, this really only left CD or SA.

My savvy journalist source goes on to mention things he heard “off the record” about “spurring false competition” and one of the venues wanting “more money out of the deal because they don’t make a big ENOUGH profit.”

The point being is that I do not consider two venues to be “multiple venues”, although my irritating high school English teacher would say that it’s “more that one so it’s multiple” and would subsequently give me a D.

But what I find so disheartening is that the Breeders’ Cup Brain Trust wants to devote itself to large venues in an effort to make more room for all the owners and breeders and sheikhs and their wallets. There is horse racing throughout most of our country – nay, the world – and many of the tracks, with the exception of maybe Blue Ribbon Downs in Sallisaw, Oklahoma, are proud of their facilities and communities and citizens. (Insert patriotic soundtrack here).

Maybe it’s because this whole Breeders’ Cup selection so-called process cast aside smaller venues, or maybe it’s because I was fortunate to enjoy Breeders’ Cup here, at Lone Star Park, or maybe I’m upholding all the efforts provided by other non-Churchill Downs/Santa Anita venues: Arlington Park and Monmouth Park. But I’m compelled to campaign for a fair selection process and take a stand against the use of the word “multiple” for anything less than three entities.

The Breeders’ Cup Host Site Selection Committee will probably never consider Les Bois or Hawthorne. But I know I would welcome the opportunity to see other sites – perhaps Tampa Bay Downs? – shine with some of the world’s best Thoroughbred racing.

However, the one thing that I never looked forward to in life was to lose someone I love. And that happened on January 29, 2008, when my mother passed away.

If you're a regular reader to this blog, you're aware that Motherhood plays a huge role in my life. I love being a mother. And I aspire to be 1/100 as good as my own mother because she was a treasure.

Mom only went to the racetrack a couple of times and her handicapping skills consisted of whether or not she liked the name of a horse. She remained mildly amused with my stories and anecdotes but never quite understood why I became so engrossed with horse racing. I compared it to bridge, a game my mother enjoyed playing. I explained to Mom that I spent no more time or energy than she did when she played bridge and read the daily bridge column; it required thought and deduction with the chief objective to win. Besides, I'm lousy at bridge.

Anyway, the world will turn and the sun will rise and horses will race and the duplicate bridge group will continue to meet. And she will be greatly missed. 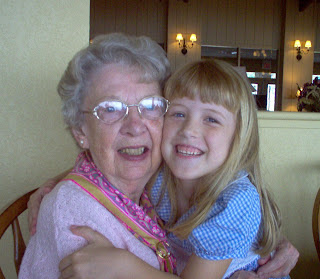 Life began with waking up and loving my mother's face.
-George Eliot, English novelist
Posted by suebroux at 3:52 PM 8 comments: