Holy Guacamole! The Breeders' Cup is next week! Whoo-hooo!! Dig the loose change out of the couch because there is some serious betting action to beholden! BTW, who's entered ?!?!?

Ummm .... uh-oh ... Trouble. Fortunately, for the horse racing fans/bettors that have had their attention diverted*, Lone Star Park will be hosting its annual Breeders' Cup Preview Party, featuring our good friend, Gary West; track announcer, John Lies; Expert Handicapper and Mr. Congeniality, Rick Lee; and local favorite sports-talk guru, Norm Hitzges. The first 200 in attendance will receive a free Breeders' Cup Advance Edition and the handicapping solution to next week's races! I will be in attendance, as it appears this year the Magic Beer Bottle could very well have the upper hand! 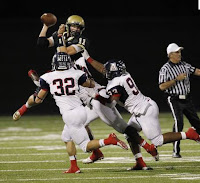 *Possess freshman in high school marching band; whole "Friday Night Lights" stuff that consumed an entire chapter in James Michener's novel, Texas, as well as a much ballyhooed TV series, is real. Scary. Forgot where racetrack is located.  Forgot how to place wager.  Not sure what a horse even looks like anymore.  BUT ... I'm proficient at serving nachos in a concession stand!