Last Saturday afternoon, Curlin won the $750,000 Jockey Gold Cup (Gr. I) at Belmont Park and set the money record for a North American horse's earnings at $10,246,800, surpassing Cigar's record of $9,999,815 that stood for 12 years and made individuals from as far as Omsk Siberia Russia and Kununurra Australia question whether or not this run-on sentence would actually end.

Our good friend and resident cat lover, Teresa, over at Brooklyn Backstretch, penned a heartfelt and stirring reflection of Saturday's events at Belmont Park,

The applause rolled across the apron and rained down from the upper levels; when I rejoined my friends on the second floor, each of us, whether we’d made money or not, or loved Curlin or not, was caught up in a wave of adrenalin, because we got to see something remarkable in the sport that we love.

She captured the emotions of the day magnificently. She included excellent photos of Curlin, Ginger Punch, Cocoa Beach and others.

Apparently, Teresa doesn't drink enough when she's at the track.

Note that it can also be considered a paltry sum. It's only 0.00142% of the Wall Street bailout.

So now Curlin's at Santa Anita, lounging poolside in the California sun when he's not training on the Pro-Ride synthetic surface, which by the way, cost somewhere in the neighborhood of $10 million. If he likes the surface, he'll meet Big Brown and others in the $5 Million Breeders' Cup Classic next month. 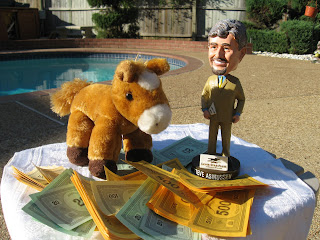 I know that many of you are looking at your calendar, saying to yourself, "Holy Horatio Hornblower! It's the Autumnal Equinox! I think I'll celebrate and go to the track!" Others are somberly reflecting on the fact that it was 15 years ago that Nolan Ryan - the Express - pitched his final game (and the Texas Rangers still can't find their way to that elusive event called Post Season). And then there are those - horseplayers, racing fans, NTRA-suits - that are filled with excitement and enthusiasm: The Summit to Corral a New Generation of Racing Fans, or something like that, is occurring RIGHT HERE RIGHT NOW in Las Vegas!

Summit member/Super-blogger, Dana, over at Green but Game, has inserted a cute little widget on her blog: Twitter. She's been putting up little posts sent, I assume, via text message on her phone. Monumental subject matter, i.e., "missed our flight" and "poolside burger + nap" and "too tired to be nervous". However, she did mention that NTRA loves the Self Appointed Fan Committee and that its 48 page report is posted on NTRA.com.

Still, I was hoping that Dana would twitter serious and profound revelations that have transpired during this summit, such as "Patrick looks like he sleeps in his clothes" or "Rumor has it that Kevin has yet to leave the casino and go to his room" or "Alex Waldrop snorts when he laughs and he should refrain from imbibing martinis before 8 AM."

Anyway, my hopes are for a successful marketing summit. A fine team has been assembled; I look forward to reading their reports soon.
Posted by suebroux at 9:39 PM 4 comments:

The Smell of Victory

That's the only thing that I could think of as I held a fistful of losing wagers following Big Brown's impressive win in the Monmouth Stakes yesterday.

This year, I've refrained from boarding the Big Brown Bandwagon. It initially began with the usual observations such as "lightly raced", "questionable hooves", "lackluster crop of 3-year-olds", and eventually evolved into a mild irritation with his colorful-yet-somewhat-creepy connections. No matter what I may think of Big Brown's ability, Michael Iavarone and Dick Dutrow give me the heebie-jeebies. And John of Not to the Swift fame doesn't exactly help their cause by pasting hot pink lipstick on Mr. Dutrow's photo.

Anyway, if ever there were a chance to go against Big Brown, the Monmouth Stakes looked downright juicy. Rain, wind gusts, hurricanes, dirty laundry ... nothing could keep me away from the track that afternoon. Proudinsky. Shakis. And just for fun, toss in Silver Tree.

Of course, Big Brown was formidable; Proudinsky unable to catch him at the wire. I couldn't understand it. Why couldn't Proudinsky and Shakis pass him in the stretch? I resisted the obvious answer. I stubbornly refused to proclaim the greatness of Big Brown. There had to be reasons: global warming, weapons of mass destruction, New Jersey in general, etc.

I remembered reading a little anecdote in Ed McNamara's Cajun Racing book, proving to the author as well as the entire literate world that I actually read the book, about how sometimes Cajun horsemen would smear foul-smelling "grease" of a dead alligator on a racehorse's rump. "It smelled so bad that the other horse wouldn't try to pass it," says some Cajun guy on page 25.

And we all know, Kent Desormeaux is one crafty Cajun.

However, the only flaw to this reasoning is that there appears to be a paucity of dead alligators in the bayous of New Jersey.
Posted by suebroux at 8:21 PM 3 comments:

From Slaughter Truck to First Class

A few days ago, I was delighted to report on the successful rescue of the 2001 Texas Horse of the Year, Lights on Broadway, and his new home with Donna and Dallas Keen. However, some smart alec (read: husband) said, “You actually walked across a pasture?? Now, that's something that you should write about!”

My relationship with horses is notably on the pari-mutuel clerk side of the rail. However, I do recall sometime during my youth of riding a trail horse named Loco. And I use the word "trail" and "horse" very loosely: I'm not sure if he was really a horse, and he definitely wouldn't recognize a trail unless it was a short path from the barn to the feed bin.

Undaunted, I visited the Keens to see firsthand their operation, as well as Lights on Broadway's new home. First and foremost, Donna and Dallas Keen are wonderful and hospitable people; I was welcomed warmly. When I first entered their home, there were numerous photos of horses adorning their walls. Dallas Keen pointed to one, indicating, “That’s Valhol”

Note to self: Google trainer/jockey/groom/beerman/person-of-interest to get background information so that I don’t look like a complete moron when meeting individual.

Dallas quickly pointed out more photos and paintings of a some of his celebrated horses: Allens Oop, Yessirgeneralsir, My Misty Princess, and his stable pony, Blue, just to name a few. I was very impressed, having remembered I had won a bucket full of money on Yessirgeneralsir more than once. 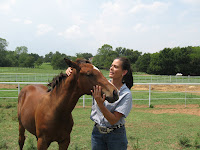 Anyway, Donna was proud to take me on a tour of their farm, especially to see Lights on Broadway via a visit to their foals. It was during this trek across the pasture that she shared her own background with horses: She got her first horse at 12 and "it was a bronc so I had learn to real quick". Later after high school, she would ride match races at old Ross Downs out by Colleyville, Texas, for trainer Johnny Hendricks and that he would “make me cry all the time. I have him to thank for making me tough.” And on a personal note, I would like to thank Jim Mulvihill for posting that Lone Star Press release about Donna [Gowdy] because I was too busy concentrating on avoiding horse poop in the pasture to really pay attention to what she was saying at the time.

Donna Keen is a devoted horsewoman and seemingly aspires to have a “collection of horses”, as her husband refers to her acquisitions. FOBs, compassionate horseplayers, animal lovers, and plain ol' human beings in general, should appreciate her passion and devotion to care, rehabilitation, training, re-training and placement of horses. The Horse Whisperer. Or is it Whisperess??

This evening, I received an update on Lights on Broadway, 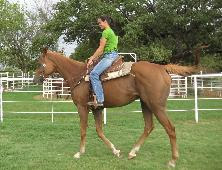 I rode Lights today. I swear I think he is the smartest horse I have ever met. He learns everything so easy. He hates being in the pasture. He walks the fence wanting to come back in the barn. He is definitely a 'kept man'. I leave him out a little longer each day trying to acclimate him but the second he sees one of us he follows us around until we let him back in his stall.
What a character he is.

Donna maintains her own blog - when she's not busy training horses or rehabilitating horses or working on her property with her husband or developing racing partnerships. In the meantime, Lights on Broadway is scheduled to make an appearance at the Equine Expo on September 13-14 in Fort Worth. Knowing Donna, she'll have him doing some tricks by then, i.e., bowing, rearing, the rhumba, baking an apple pie, etc.

And finally, an answer to all of the smart alecs reading this blog entry: No. I never stepped in any horse poop.
Posted by suebroux at 11:56 PM No comments: 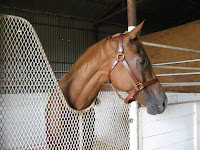 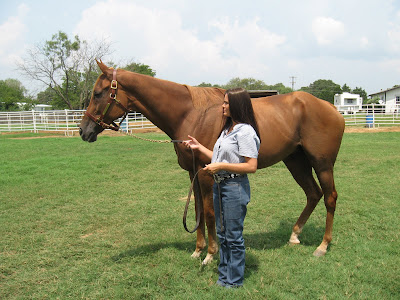