Art in the Winner's Circle

Recently, our favorite flamboyant horse racing blogger, John of Not to the Swift fame, perused the SI Vault and shared with us various equine art that graced the cover of Sports Illustrated many, many years ago, long before anybody invented LZR swimsuits or Michael Jordan. John demonstrated his extensive art intellect regarding notable artists Morton Roberts and Daniel Schwartz, expressing savvy insights of Edgar Degas and/or Pink Squirrel influence.

Coincidentally, Genius Alan displayed his art smarts after an evening at the Queens Museum. I was most impressed with the conceptually eloquent piece by Denzel Washington that was made out of old clothes. If I had the temerity to clean out my husband's sock drawer, there's a possibility that I could embark on some art odyssey; a piece entitled Texan Defeet that would be worthy of display at some roadside crawdad stand in Natchitoches, Louisiana.

Anyway, my Thoroughbred blogging kindred have inspired me to share with you equine art from my own personal collection, especially my newest acquisition, Camel Time. 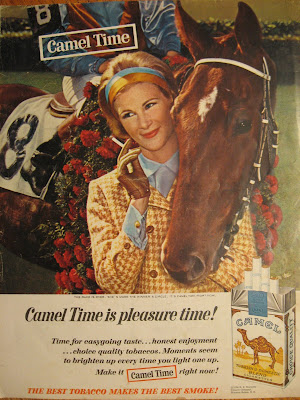 I recently purchased this piece of artwork for the whopping price of $0.99. It is a 1964 R.J. Reynolds Tobacco Company advertisement that reads, "The race is over. She's made the winner's circle. It's Camel time right now." Featured in the piece is the spatial relationship of an attractive owner and her handsome stakes-winning chestnut horse, both of whom are enjoying what is clearly a Camel cigarette. The flowers draped on the horse's withers are red carnations, which in 1964, were awarded to the winner of the Buford T. Snodgrass Memorial Stakes at Garden State Park in New Jersey, along with a carton of cigarettes. Or maybe not.

Of course, I'm not as articulate in my art critique as some as my other horse racing brethren, however I have discovered a useful tool, The Instant Art Critique Phrase Generator. Thus, I can remark with complete confidence in regards to the piece, Camel Time, the subaqueous qualities of the purity of line makes resonant the distinctive formal juxtapositions.
Posted by suebroux at 9:33 AM 6 comments:

My Dad came to visit over the holidays. And my Dad made me play golf with him. And that 82-year-old punk beat me by two strokes. But during his visit, he shared with me profound words of wisdom,

Reach high, for the stars lie hidden in your soul. Dream deep, for every dream precedes the goal.

Okay. He really didn't say that. The most profound thing my Dad ever says to me is "How 'bout a martini?" or "Let's go to Home Depot and buy you a socket set."

Anyway, I have compiled a modest list of some of my goals for 2009 that I would like to share with you. It's noteworthy that this list looks remarkably similar to my goals of 2008 and 2007.

1. Write more serious and factual information for my blog
2. Improve appearance of my blog
3. Win the Pick-6 at Santa Anita when there's a $2,568,990 carryover
4. Lose 8 pounds 12 pounds
5. Exercise daily
6. Quit drinking
7. Get appointed to the Texas Racing Commission

The first goal, writing factual and serious information for Post Parade, is a timely subject. Recently, there has been a major seismic upheaval involving credential journalists, turf writers, bloggers, and the guy who publishes Pinkie's Hot Tips. Journalists have demonstrated a disdain for those who blog, insinuating that they are a poor substitution for a reporter and that they should be relegated back to the primordial ooze from which they came. Meanwhile, bloggers argue that the racing media is changing, transitioning from print media to the internet. And let's face it, the internet is available to everybody; it's not like we have to pay dues to Al Gore. So as free-lance, unpaid, horse racing bloggers, we have the freedom write, "Frank Stronach is a nincompoop."

However, I believe for the most part, bloggers do not consider themselves a replacement for journalists. But they can be a zesty complement to the media. Opinions, history, factual snippets that may not find its way to print media, are provided. How can that be bad for horse racing? Contrary to popular belief, I have been known to provide facts on many occasions, such as the unusual racetrack incident of Mr. Smee. Maybe, at this writing, I'm not serious and, for the most part, factual, but my efforts are aimed to garnering a smile or a chuckle. Paul Moran should give that "smiling" stuff a whirl sometime.

So, I think I have a good handle on that first goal; very attainable. Not so sure about making Mr. Moran chuckle though.

My second aspiration is to improve the appearance of Post Parade. That should be easy. New template. New colors. Improve links. Add more photos. The only thing required is a burst of creative energy, which may come to me in an unsuspecting moment sometime in July. In the meantime, I can begin working on this goal right now. Feel free to take a moment and enjoy this picture of Chris the Guinea Pig: 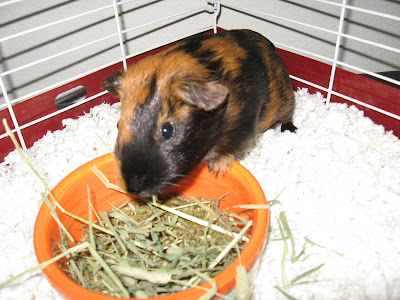 Let's review my third goal: A winning Pick-6 ticket with a disgustingly obscene carryover. Dream on.

The next three goals of the new year - lose weight, exercise, cease drinking - are all entwined. If I sacrificed my frozen margaritas and ran 5 miles each day, I'm fairly certain I would lose a few pounds. However, if I gave up my frozen margaritas at the racetrack, what cold liquid refreshment could I possibly enjoy while watching and wagering in the warm Texas sunshine? There could be a distinct possibility that I would have to sacrifice going to the track (aghast!). Thus, I have concluded to realize these dreams that I would have to take drastic measures, like having my liver removed.

And finally, I aspire to be part of the Texas Racing Commission. Timber Trick's positive drug screen, the commission's "zero-tolerance" stance, and the subsequent volley of opinions and accusations involving cheaters, contaminants, and chapstick, made me question as to whether the Texas Racing Commission has racing's best interest. Drug testing is a top priority this year; anabolic steroids outlawed. I think I could be beneficial to the racing commission, especially with my laboratory science background and given the fact that I can recognize a horse. I contemplated campaigning for a position on the Texas Racing Commission until I was informed that they are appointed by the governor (read: contributors to Rick Perry), therefore I shall pursue this goal by writing to the next Governor of Texas, Senator Kay Bailey Hutchison, and including a small contribution to her campaign in the hopes that she remembers me in 2011. I'll start with $5.
Posted by suebroux at 10:14 AM 14 comments: