No Rachel? No Problem! Your Preview to Oaklawn Park.

So Rachel Alexandra is not going to Oaklawn to race against Zenyatta in the Apple Blossom (gr. 1), and now you’re tempted to shred your tickets into itty-bitty pieces. But wait! You should go! You should go because, let’s face it, it’s all about horse racing!

And in the spirit of many great explorers, like Lewis and Clark and Sacagawea and her two whiny papooses (“Are we there yet?”), I ventured deep into the Ouachita wilderness to go on an Oaklawn Park reconnaissance mission.

The adventure begins last week Friday at the Boll Weevil Pawn Shop and Superstore at the corner of Central Ave and Woodlawn in Hot Springs, situated across the street from the racetrack. No, I was not securing wagering funds but rather I was parking my car. And it cost me $10 to park in their lot. I just about coughed up a hairball. This required some investigation, so I interrogated the friendly neighborhood Boll Weevil Pawn Shop clerk. The clerk informed me that parking is roughly $10 at the local businesses on race days, however the prices increases to $20 on Saturdays and Sundays. And on Arkansas Derby Day?? You’re looking at parking prices ranging $40 to upwards of $100 to park (cough). Rumor has it that some guy opens a snow cone stand along Central Ave during racing season and funds his retirement with the parking fees.

By the way, there is a parking lot associated with the racetrack and according to Mr. Boll Weevil Pawn Shop clerk it costs $2 to park – but only if you are a season ticket holder. And even then on Arkansas Derby Day they're out of luck as the whole parking lot is reserved for employees.

Entry into the racetrack was exceptionally reasonable at a couple of dollars for general admission. When we first entered the grandstand, my eight-year-old daughter made a very keen observation: “This place smells!” Of course, she would be referring to the saddling paddock that is actually situated inside of the grandstand by the main entry. There’s not a whole lot of elbow room for a multitude of horseplayers to observe the horses in the paddock, and there doesn’t appear to be any kind of walking ring at the facility. So rest assured, if Rachel Alexandra had been racing next week, you probably wouldn’t have been able to see her in the saddling paddock anyway. 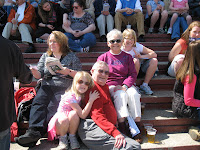 It was a gorgeous sunny Friday afternoon for our racetrack adventure so we naively believed that we could enjoy the races lounging on the apron, enjoying the warm sunshine. I was informed that there were “concrete benches” outside, available first come first serve. It should be noted that most people in the English-speaking world would refer to these “concrete benches” as “steps”. At first I was rather shocked that Oaklawn would not have actual benches or outside seating, but then it struck me – racing is from January through the beginning of April, and who the heck is going to sit around outside during the winter? That said, one can easily mill about the lower floor of the grandstand – outside to inside to the mutuels to the snack bar. And the mutuel clerks – there are plenty of clerks - were friendly and very efficient.

The grandstand itself is peppered with lot of racing paraphernalia and photos, most notably some very clever horse racing cartoon murals adorning many walls. Surprisingly, box seats are not very exotic; they’re placed throughout the upper floors of the grandstand in a variety of locations. Come to think of it, I don’t recall that they even had their own TV monitors like I’ve seen at other racetracks. They’re just comprised of a few plain ol’ chairs in a box. 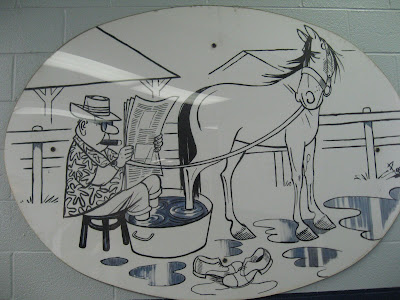 Ladies: Beware of Potty Parity! Admittedly, I have been spoiled at Lone Star Park as there is always plenty of bathroom stalls, and the restrooms are clean and well maintained during live racing. Anyway, the Ladies’ room at Oaklawn Park has 4 to 5 stalls each, and I was rather disgusted as to its condition by the 8th race. And this was on a day with an attendance of 8000 people!

So perhaps from my little expedition you gleaned that parking may not be so ample or affordable, outside seating is rather lacking, and it may behoove you to refrain from imbibing an excessive amount of liquid refreshment, but the facts remain that Hot Springs embraces horse racing and Oaklawn Park makes a remarkable effort to have an exciting meet.

And here’s a bonus: After a hard day at the racetrack, there are plenty of places to go for a nice long hot bath!
Posted by suebroux at 11:42 PM 3 comments:

Alice has to buy a school lunch today.

Truthfully, I never got around to buying any bread (or cereal for that matter so I’m not exactly sure what she ate for breakfast) because yesterday I was called into the lab to do some stem cell analysis for a couple of impending transplants only to have instrument problems that took more time to troubleshoot than Avatar and when I was finally done with my work my husband sent me a text, saying he had caught an earlier flight and he was waiting outside terminal C and could I pick him up, and when I got him back to the house my daughter Sophie desperately pleaded for me to wash her gym clothes for the next day and that we also needed to dash over to Mr. E.’s Music because she broke her last clarinet reed and she was scheduled to play in an ensemble contest the next day, all the while as Alice recorded Scooby Doo and the Ghoul School as well as other assorted cartoons with the DVR which, in turn, automatically deleted my last two episodes of The Mentalist that I had never got around to watch.

My point: I don’t have time to watch TV.

The Odds On Intermittent blogger astutely remarked that horse racing fans will be excitedly watching the races of Rachel Alexandra and Zenyatta, but who else will be watching?

I am mystified as to why none of the major networks deemed these races worthy to broadcast. Where are our marketing representatives those who claim to promote and market the sport?

Did they fight to get these races televised to a national audience?

Frankly, I’m not sure major networks really know how to broadcast horse racing. As a biased multitasking racing fan, sure, I can sit in the simulcast parlor and observe an array of television screens with varying racetracks, horses, racing conditions, and time zones. Okay, Tampa Bay Derby at 4:30 [Central time], Fair Grounds at 5:15, quick flip to Santa Anita at 5:36, and quickly get back over to Oaklawn for the Rebel for its 5:47 post time. Hopefully, I won’t have to go to the bathroom.

It would be a network meltdown.

For example, take the Kentucky Derby broadcast. It drives me nuts. I’ve watched it - once. It’s a two hour broadcast with stories and vignettes and celebrities and Mint Julep concoctions and the words of "My Old Kentucky Home" scrolled along the bottom of the TV screen for those of us who want to sing along at home, when instead we should be mowing the yard. I can’t recall if the broadcast showed any Derby prep races – maybe just snippets – but I clearly remember there was no broadcast of the undercard. 2 hours of schtick for a 2 minute race. I could’ve been washing my car.

Personally, I believe there should be a way to effectively broadcast horse racing in a concise and entertaining way. The Take Back Saturday mantra as touted by Aspiring Kevin seems like an interesting and doable model; the Triple Crown prep races being a good place to start. If live racing proves unfeasible, what of a weekly recap show hosted by an entertaining and informative broadcast ensemble? Maybe hire Charles Barkley?

Anyway, I’ll be at the racetrack watching the much anticipated seasonal debuts of Rachel Alexandra and Zenyatta. And, admittedly, maybe I would have more time to watch TV if I didn't spend my Saturday afternoons at the racetrack. But the only way I can watch horse races I have to be at the track because racing's not on TV. Well ... what sort of logic are you expecting from someone who can't remember to buy a loaf of bread?
Posted by suebroux at 11:56 AM 5 comments: 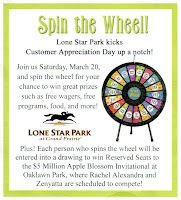 The other day, I received my little monthly flyer from Lone Star Park. I always enjoy taking a few moments of perusing through the leaflet, scouting for deals and freebies that are dappled amongst the upcoming simulcast stakes races. When it comes to free admission, free race programs, or even a free cup of coffee, I’m on board. I mean, who doesn’t like freebies? So when I noted a Spin the Wheel! promotion for a chance to win various prizes on Customer Appreciation Day, I became positively giddy!

Spin the wheel for your chance to win great prizes such as free wagers, free programs, food, and more!

I was slightly puzzled that the announcement didn’t indicate "free" food, the word “food” being rather vague. Maybe it would be free quesadillas? Or a free hot dog or hamburger? Or maybe just a voucher for a free meal at the Homestretch Grill? I glanced at the picture of the prize wheel on the flyer. It’s probably indicated on there, I thought. A closer inspection of the prize wheel was required.

Well, racing fans, here’s some freebies to get excited about. And I’m not making any of this up:

Of course, there is an upside to spinning the prize wheel:

Each player who spins the wheel will automatically be entered to win Reserved Seats for two (2) people to see Rachel Alexandra and Zenyatta compete in the $5 Million Apple Blossom Invitational at Oaklawn on Friday, April 9! Also included are overnight accomodations and $500 spending cash! *Complete rules at LoneStarPark.com.

That's better than Extra Recess Time.
Posted by suebroux at 8:50 AM 2 comments: