A Respite in Derby Fever for Non-Crustaceans

Last Saturday was Dollar Day at Lone Star Park, where a throng of over 16,000 people stood in lines for beers, hot dogs, wagers, and bathrooms. And of course, next Saturday is Derby Day, where there is sure to be another, if not larger, horde of people. So, in an attempt to throw a lifeline to pari-mutuel clerks, beer vendors, the industrious janitorial staff, and the multitudes of harried handicappers, Lone Star Park is offering up a rather modest race card tomorrow. But wait! Should that give you cause to stay home and clean out your garage? Emphatically, NO!! Because tomorrow is Chef Jake's Cajun Crawfish Boil!

Now, I'm sure many of you are thinking, "What can possibly be the relationship of crawfish (or 'crayfish' for all you Yankees) and racing?" Well, interestingly enough, there are are numerous similarities between crawfish and racing, many of which remain unrecorded because Boudreaux couldn't find a pencil. However, it was reported that back in 1972, at the second annual Cajun Festival in Port Arthur, Texas, that a crawfish named Speed LeFloor won the Commissioners Sweepstakes Crawfish Race, setting a lively pace and going away handily. Speed LeFloor was immediately purchased for $1,000 by Henry Monte Jr. and turned out for stud.

Betcha you haven't read that one on Colin's Ghost. 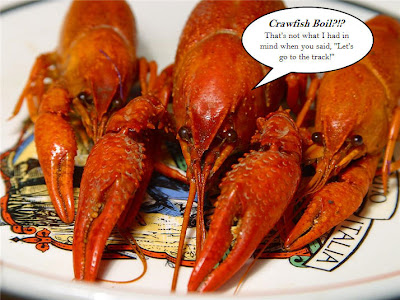 Oh, and speaking of racing Cajuns, it's noteworthy that one of horse racing's favorite Cajuns, Calvin Borel, has secured a mount for next weekend's Kentucky Derby: Sunland Derby winner, Twice The Appeal. As they say, "It's déjà vu all over again".
Posted by suebroux at 10:27 AM No comments:

Does Ted Nugent Have a Derby Favorite? 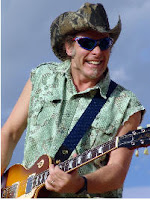 Don't have a Derby horse? Neither does Ted Nugent.

Well, truthfully, I don't know if he does or if he doesn't. The Nuge was here on Saturday to perform a concert at Lone Star Park after the races and, being the intrepid blogger that I am, I had a stranglehold of desire to interview him. If you are a regular reader of this blog, you know that Post Parade knows no bounds when it comes to scoring the big interview! And, let's face it, everybody 3 people want to know, especially after the recent drubbings of favorites Uncle Mo and The Factor in The Wood and the AR Derby, respectively, who's on Ted Nugent's Derby Watch?

Sadly, there was no interview opportunity for me after the races. I just got to hang around with a bunch of my peers, a.k.a, paunchy middle-aged people who saw Ted Nugent in 1976 back when they were in high school. However, if I had had the chance to actually speak with Mr. Nugent, I was completely prepared to ask some very hard-hitting and highly informative questions, such as,

2. Interestingly enough, I see that you played the role of "Skunk" in the movie, Beer for My Horses, with country music superstar, Toby Keith. And of course, not only is Toby Keith talented and/or hot, but he owned the undefeated Cactus Ridge. Can you share with my readers your experiences or aspirations with Thoroughbred horse racing [that doesn't involve a gun]?

So, at this writing, does Uncle Ted like Uncle Mo? Unknown. And frankly, as we rapidly approach the Kentucky Derby, I'm not so sure who I even like. I'll probably be contemplating my Derby selections over morning coffee on May 7th. Oh, and as good fortune would have it, Ted Nugent even has his own brand of coffee, Nuge Java,

"My life of rock-n-roll and hunting is a stimulating adventure every day. There is nothing average about my days, including my morning joe. Nuge Java prepares me for an amazing American Dream every morning. It's Spiritual Rocketfuel!" says Uncle Ted about his coffee.

Lone Star Park Opening Night: Not Quite Blown Away

One expects a festival type of atmosphere on opening night; an evening rife with giddy anticipation and optimism during the upcoming weeks. Just the possibility of being the handicapping genius and/or lucky boob that scores a big fat payday on a winning 10-cent superfecta is enough to buoy anyone’s spirits. However, oddly enough, the opening night sizzle never quite materialized. And frankly, I’m unable to pinpoint exactly what element was missing.

Perhaps it was the familiarity of the pre-race ceremonies. Traditionally, a giant Texas flag is unfurled by a large contingent of high school kids, and everybody puts down their beers, listen to God Bless America and gets teary-eyed. However, last night the wind was whipping down the stretch at gusts of 30-40 mph, and do you know what that does to giant unfurled flags? It was a massive waving monster! The kids struggled to maintain their grips, a few of them completely unable to hold onto it. And the only thing I could think of at the time was that I needed to get this on video - if the flag wrested free from the handlers it would blow all the way to New Mexico! That would make for great YouTube!

Or maybe some of the onus goes to the self-serve AmTote kiosks. It’s the first day of live racing and they should be running like a well-oiled machine, but many performed like a rusted-out 1980 Chevette. Touch screens were temperamental and paper jams swallowed up vouchers. The self-serve banks of tote machines are very popular with the bettors at Lone Star but more than one person voiced a little frustration.

Or perhaps hot dog buns should receive a little blame, too. Lone Star Park could sure use buns with some courage. It’s a great source of irritation when a hot dog bun splits into two pieces. My Grand Prairie Dog was placed in a wimpy bun that broke in half immediately and, I’m sorry to say, there is no tidy way to eat a hot dog in a broken bun with mustard and relish and onions dripping all over your hands and you’re a sticky mess by the time you’re done eating and then you have to go to the bathroom to wash up but it’s on your way to the bathroom that you run into the Vice President of the racetrack who recognizes you and sticks out his hand in greeting and you have no choice to shake his hand with your sticky mustard-covered hand.

Perhaps there was some kind of cosmic misalignment in the Premiere Stakes itself. The favorite, Coyote Legend, broke through the gate in a false start; his regular rider, fan favorite Bobby Walker Jr., was notably absent, having broken [fill in bone here]. Coyote Legend didn’t recover from his miscue, and rallied to come in second to Lydia’s Last Step. And I’m sorry – no gelding should be named “Lydia” or any kind of variant or phrase or otherwise. It’s a girl’s name. They should refer to him as “Pete”.

Regardless of tote machine malfunctions and flimsy hot dog buns and boys named “Lydia”, Lone Star Park remains committed to live racing and providing great entertainment for fans. It’s no secret that the racetrack has struggled with ownership problems, but the team is hanging tough. The Lone Star Music Series kicks off tonight with the Randy Rogers Band, and tomorrow is The Nuge himself, Ted Nugent. Additionally, the racetrack now offers two new wagers: The 10-Cent Super Hi-Five and the Fortune 6. 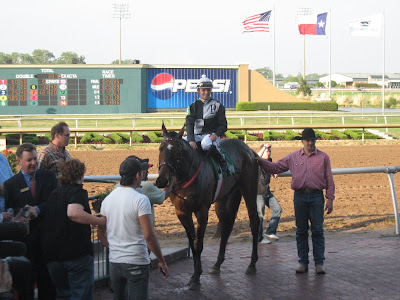 Tune In for the Florida Derby

Sunday is the the much ballyhooed prep for the Derby: The Florida Derby. As I pondered the significance of the race, it gave me pause for reflection - the Kentucky Derby has "My Old Kentucky Home", the Preakness has a rendering of "Maryland, My Maryland", and the Belmont has whatever song that includes the words New York. It is truly a tragedy that the Florida Derby does not enjoy its own noteworthy tune.

But fear not! I have taken it upon myself to pen a song, a rather modest rendition if I may say so, in recognition of the Florida Derby:

All Hail Thee, Oh Gulfstream Park
(sung to the tune of O Tannenbaum. Or any song by Nirvana) 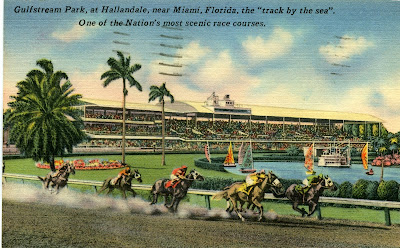 Footnote: For tomorrow's race, this lyricist is selecting Dialed In and Soldat, while recklessly wheeling horses in double-digit odds underneath.
Posted by suebroux at 3:05 PM 4 comments: