Heat and Horses While Joe Jonas Sings the Blues

How hot was it?

It was so hot that my daughters exclaimed, "Our pool feels like bath water!" and tagged along with me to my weekly trek to Lone Star Park just to cool off.

It was so hot that Drew Shubeck was selling shade to bolster purses.

Regardless of the heat, Saturday was the 11th running of the Lone Star Oaks. The card kicked off with a Chris Landeros Daily Double. Chris Landeros, by the way, is a jockey that swooped in from Turf Paradise or Golden Gate or some other place in another time zone, and he’s winning here at a clip of about 23% with an average win payoff of $10.40. These days, he’s a factor in my wagers and I have enjoyed many winning tickets. I need to send him a fruitbasket. Or some ice.

Another factor that holds a lot of clout these days is Sunland Park. Finish Line Ahead, a 5-year-old gelding, was racing in a modest claiming race and had enjoyed a less-than-spectacular campaign recently in Sunland Park and Zia Park (the other place that nobody knows about in New Mexico). On paper, he didn’t look like much, but using the Mine-That-Bird-That’ll-Teach-You-To-Disregard-New-Mexico Handicapping Strategy, I won enough money for slush margaritas, ice cream, and Guitar Hero.

The girls and I ambled about the racetrack amidst the smattering of heat tolerant horseplayers when we happened upon the band playing in the Courtyard of Champions. A really good blues band. Plenty of seats available.

After a set, I approached the lead singer, a man who looks like he’s been singing the blues for 50 years,

Me: Hey! You guys are awesome! What’s the name of your band?
Blue Singer: Joe Jonas.
Me: (snort) Yeah, right. My daughters’ have a poster of Joe Jonas hanging in their bedroom. You don’t look anything like him.

He shrugged, clueless to my reference, and handed me his card: Joe Jonas Band.

Well, of course Sophie and Alice had to have their picture taken with Joe Jonas. I mean, what tween wouldn't? 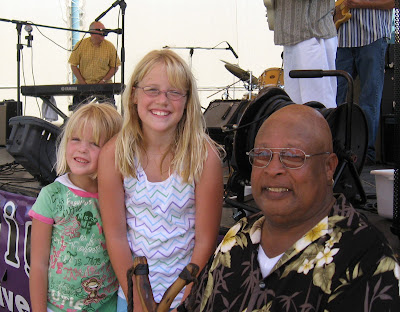 The 8th race was the 11th running of the Lone Star Oaks, which had attracted a solid field of 3-year-old fillies. Notable was the Allen Milligan trained My Spanx who had won the La Senorita at Retama last November, and then in her next start, raced in the Martha Washington at Oaklawn against some filly named Rachel Alexandra. Okay, My Spanx finished a half-mile behind Rachel Alexandra but that was good enough handicapping edge for me.

My Spanx rallied to win the Lone Star Oaks over the firm turf course.

Ridden by Martin Escobar, My Spanx traveled nicely while racing along the rail and just in behind the early leaders through opening fractions of :24.19, and :49.48. The bay daughter of A. P. Delta had some anxious moments at the top of the stretch as she searched for room to run, but once she saw daylight along the rail, she rallied to stop the teletimer in 1:43.18 for the 1 1/16-mile journey. Post time favorite Busy Mass finished a neck back in second, and it was another half-length back to Fourstarattraction in third.[LSP Press Release]

Besides meeting Joe Jonas, I met photographer Patrick McKeethen. He informed me that he doesn’t work for anybody so I suggested he work for me for the low, low pay of nothing, and I told him that I could sure use an original photo of the Lone Star Oaks for my blog.

Mr. McKeethen obliged, capturing this photo of My Spanx rallying past favorite Busy Mass to win the Lone Star Oaks, 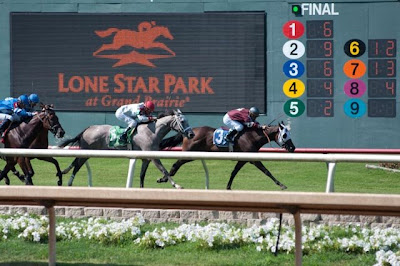 It may have been a hot afternoon, but only Joe Jonas was singin’ the blues.
Posted by suebroux at 12:16 AM

Great article, Sue! Patrick could have at least paid you $5 for writing it! (A beer at Lone Star cost $7, btw)

Anon: Call me old-fashioned, but I like to think that gratitude and well-deserved credit still mean something.