Clearly, December is my unofficial off-season for horse racing. I went to the racetrack once, placing two pitiful wagers - one successful. Daily briefings from Paulick, the Form, and the multitude of horse racing blogs dwindled to occasional visits a couple of times each week, generating mild interest. Even Gary West's detailed Eclipse Ballot dissertations only received modest attention. (Sorry Professor. But on a happier note I really enjoyed your feature on TCU Horned Frog fever sweeping through Rome! Molto divertente!)

Actually, the closest thing to horse racing I experienced was taking my daughters to see Walt Disney's The Princess and the Frog - Ray the firefly sounds exactly like Calvin Borel. Kinda looks like him, too. 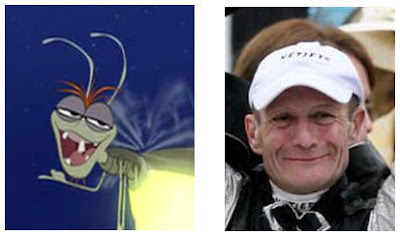 Anyway, the new year always brings hope and invigorates the horse racing soul. The smattering of 2-year-olds on a 2009 horse watch list - Lookin at Lucky, Caracortado, Evening Jewel - become a starter kit for Derby prospects. Gulfstream opens January 3, giving rise to a new season of Thoroughbred competition in sunny Florida where old-timers reminisce about the old grandstand while others take [continued] pot-shots at Frank Stronach. A short two weeks later, the Oaklawn meet gets underway, where many savor the memories of the racing campaigns of recent greats, Smarty Jones and Afleet Alex. Will another champion race through Hot Springs this year?

Derby prospects will grow. Lively discussions among fans and bettors will ensnare me. I'll begin to squirrel away a few extra dollars from my paycheck, contemplating wagering possibilities. Announced visits to the racetrack become more frequent, all the while covert trips - "Honey, I'm going to dash out and do a couple of errands!" - become routine. And before you know it, it's April and Lone Star Park will start it's 2010 Spring Thoroughbred Meet, and my family will be relegated to wearing dirty underwear because I simply don't have time to do laundry much less pack school lunches and ensure homework is done and whether the kids took a bath or not because we have a pool and they can just go swimming for cryin' out loud and wouldn't they be clean enough? I mean, it's not like we have an audience with the Pope or anything like that.

Yes, this horse racing fan is anticipating a new season, a new year.

Happy New Year!
Posted by suebroux at 9:17 AM No comments: