Love Horse Racing? There's an App for That!

It happens to all of us. We've been stuck in waiting rooms for doctors' appointments, or boring budget meetings, or delayed flights. And the only way we survive and forge on through these mindless, frustrating colossal waste-of-times is our Smartphones. We peruse Facebook, check sports' scores, and play "Angry Birds" to pass time. But wouldn't it be handy [and a lot more entertaining!] if we could check out the races at Aqueduct? Or replay the Fountain of Youth? Or review yesterday's charts from Santa Anita? Well, good news! There's an app for that!

Kenny and Sue McPeek developed a horse racing mobile application, Horse Races NOW, that is designed to entertain and provide easier access to horse racing fans, and perhaps build a stronger fan base.

“This iPhone app is dedicated to fan participation and viewer proliferation of horse racing worldwide,” said Kenny, “It’s like having the program for every racetrack in the palm of your hand.” [KYForward]

The development of this app required involvement from the Jockey Club and Equibase, as well as relationships with racetracks and horsemen, all working together. It should be noted that this is not a wagering app, although there are links to wagering sites. Horse Races NOW is strictly entertainment; marketing racetracks and their product.

So grab a cup of coffee and take a few minutes to watch Kenny's demo of how the application works. The app download is free for a limited time. Pretty soon waiting for the doctor or a delayed flight will be a pleasure.
Posted by suebroux at 10:39 AM 1 comment:

Last weekend Sam Houston Race Park concluded its 2012 Thoroughbred meet. And the Good News: The racetrack posted a 35% increase in handle and a 40% increase in average daily attendance.

This is a positive - and maybe hopeful? - sign for the slotless Texas horse racing industry. It was only a couple of years ago that Texas racetracks proposed consolidation; eliminating 48% of racing dates. SHRP was prepared to axe its 2011 Thoroughbred meet and transfer its purse monies to Lone Star Park in a bid to bolster foundering purses. Well, needless to say, a small faction of Texas horsemen thought the idea basically sucked and put up a fight. When the smoke cleared, racing dates were reduced but SHRP's meet was still intact.

And instead of barking the usual Texas racetrack battle cry, "We need our VLTs!", Sam Houston did something that I have been touting for years: Be creative!

The racetrack had a 31 day "boutique" meet to increase their purses. To the bettors' delight, there were rolling Pick-3's with 12% takeout and 50-cent trifectas. They revised their popular Texas Champions Day and turned it into a 2-day Texas Champions Weekend extravaganza. Friday night 50-cent beers! Camel races! Ostrich races! Buzz! Buzz! Buzz!

SHRP brass felt they offered the most competitive racing program ever, however they know that there is room for improvement. Apparently, their on-time performance for major races was poor, running as many as 22 minutes behind schedule. Their premier event, the $150,000 Maxxam Gold Cup has no business going off at 10:50 p.m.; that's not an attractive hour for your East coast bettors. However, SHRP is now on the Creativity Express so hopefully we'll continue to see progress.

Meanwhile, Lone Star Park is preparing for the start of their Spring Thoroughbred meet on April 12. I've already voiced my displeasure at their initial "creativity." One can only hope that the positive gains demonstrated by SHRP will serve as an inspiration to Lone Star Park and provide a much-needed energy jolt for Texas horse racing.
Posted by suebroux at 10:40 AM No comments:

So, HBO has cancelled Luck after its third horse fatality on the set. I've only casually observed a smattering of scenes from one or two episodes over the past several weeks that probably totals 20 minutes, if that much. But much of the horse racing world was watching - being a vanguard - to see if the promising and critically acclaimed series would serve as a proponent and initiate a fresh pack of racing fans.

Although Luck wasn't exactly considered a ratings bonanza, Matt Zoller Seitz at Vulture.com argues that HBO's success is not driven by ratings, but rather subscription renewals.

What made this case unique ... was the nature of the show itself. No drama in TV history has been built exclusively around horse racing and the daily life of a track. Hollywood has used horses during production for over a century. Horses have been getting hurt or killed in production for just as long, sometimes because of negligence or cruelty but more often because of simple probability. When a story is dependent upon horses, over time it becomes increasingly likely that one of them is going to be hurt.

However, this 20 Minute Critic is more aptly to agree with one of the comments posted following his article,

This was a weak show that had the unfortunate side effect of being harmful to its equine co-stars. It never engendered much passion, except from critics, and it won't be missed. [Heliotrope]

Meanwhile, HBO will continue showing completed episodes of Luck. And in an effort to provide closure to the series, a script is in the works that will see Dustin Hoffman's Chester "Ace" Bernstein nod off after a long day of conniving and wake up the following morning as a Red Panda only to find a fat Panda taking a shower, realizing that Luck was nothing but a dream. 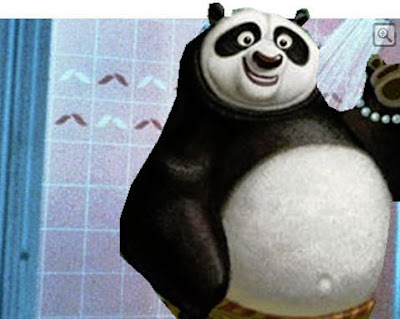 Posted by suebroux at 5:30 PM No comments:

Last weekend my husband, in his quest to relive his childhood, pulled out a dilapidated cardboard from storage. Scrawled across the top of the box with black marker, "MINE! TOUCH IT AND DIE!" A hush overcame the household as he opened his time capsule to reveal its precious contents: His collection of MAD Magazines.

As he lovingly perused through all the issues, he stumbled upon an unexpected treasure - his original 1978 National Lampoon Sunday Newspaper Parody.

We've had a blast the past few days reading all the news that's not fit to print. Interestingly enough, in this day and age as horse racing coverage continues to disappear from mainstream newspapers and media, the Dacron, Ohio, Republican-Democrat offered up a full page devoted to horse racing. And the Morning Line at Blowfish Park by Dugan O'Neill is some of the "finest" handicapping demonstrated.

PAWN ME - Last ran well in Tijuana under different name.
JIMMY'S CART HORSE - Fits description of stakes horse stolen recently in Southern Calif.
DRAINAGE SLEW - Runs like it was on the deck of a freighter in a hurricane.

And I found the 4th race especially intriguing, 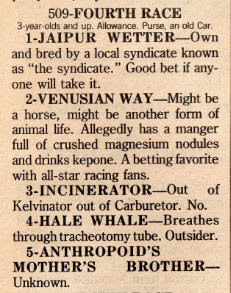 The humor of P.J. O’Rourke and John Hughes has withstood the test of time. Unfortunately, the Sunday newspaper has not; its multitude of sections and inserts that required a couple of hours to read has vanished.
Posted by suebroux at 9:31 PM 4 comments: