A little over a year ago, trainer Donna Keen got it into her head that she wanted to rescue ex-racehorses. Before you knew it, she filed her 501c3 papers, established Remember Me Rescue, and began assembling a collection of horses that needed some TLC, retraining, and happy homes. And in its first year, her little rescue operation that she runs with her husband, trainer Dallas Keen, has placed 36 horses.

And to think I can’t even give away a guinea pig.

Anyway, taking care of horses isn’t cheap. Many times Donna and Dallas stretch themselves financially. “We actually go in the hole about $[a lot] a month, (Dallas would flip if he knew so shhhh, lol),” Donna informed me. Since deficit spending is undesirable, unless of course, you’re the government, Donna and Dallas depend on grants, gifts and donations to keep the rescue operation going. And sometimes, it requires a little fundraising creativity.

Recently Steve Asmussen and Jess Jackson donated 2009 HOTY Rachel Alexandra’s stable halter to Remember Me Rescue and, right this very minute and throughout the month of February, Donna is auctioning this piece of memorabilia – history! – in an effort to raise funds necessary to build a new rehabilitation barn. The halter is enclosed in a shadow box that features the autographs of Steve Asmussen and jockey Calvin Borel, along with a plaque heralding 2009 Horse of the Year Rachel Alexandra. 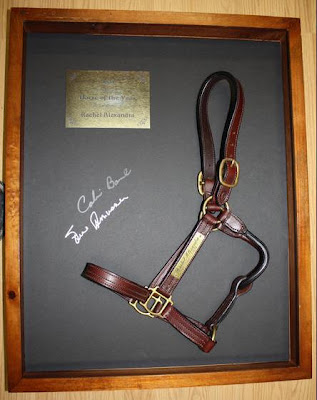 Of course, when I saw this item the other day, I immediately went to work around the house in attempt to scrounge up some money; rifling through drawers, old purses, not-so secret stashes of “mad” money. It’s a tremendous collectible and the proceeds go for a good cause. My husband didn’t exactly share my enthusiasm.

“Where are you going to put it?” he asked.

“How about with your copy of To Kill a Mockingbird?”

Now those are fighting words in this house because any time he wants to poke me with a stick about money and auctions and collectibles he makes some snide remark about my book To Kill a Mockingbird that is autographed by my favorite actor of all time, Gregory Peck, who you may or may not know, won an Academy Award for Best Actor for the role of Atticus Finch, and I drove all the way to some auction in Norman, Oklahoma, just to buy it and my winning bid was for this coveted piece of memorabilia was a rather ridiculous $350. And the book has been stashed away in some storage box for the past 15 years. But I digress.

Nevertheless, this is not some flimsy paperback book. This is a halter worn by a horse that has carved her name into history, encased in a shadow box for proud display! And it would certainly look stunning up our living room! 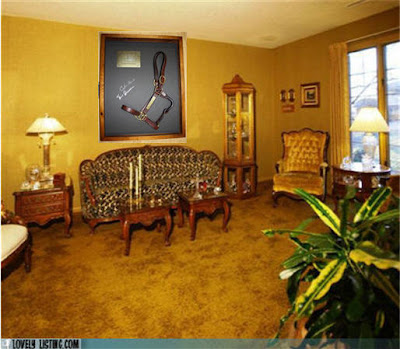 Most of all, the money goes to a wonderful cause that horse racing fans can certainly appreciate.

For more information, visit Remember Me Rescue or Donna's blog. She also has more photos of the item on Facebook.
Posted by suebroux at 12:24 PM 1 comment:

The situation has become grave.

Three weeks into the new year and I have yet to assemble the beginnings of a list of my potential Derby hopefuls.

In an attempt to rectify the situation without the aid of plagiarizing Steve Haskin, I went to the racetrack on Saturday, figuring that the Holy Bull and the Lecomte Stakes would be an excellent place to discover additions for my Derby contender list.

Now, it’s been a little while since I’ve spent an afternoon enjoying the fineries of simulcast action and socializing with my racing brethren; horse racing hasn’t been receiving my utmost attention due to many other distractions, such as my family and work and NBC’s Leno/O’Brien late night TV debacle. However, I easily slipped back into the happy routine of handicapping races, placing simple bets, and shredding losing tickets. Okay, I cashed in a few winners, too. And one of those winners is now a prominent feature on my Derby watch: Winslow Homer.

Winslow Homer, winner of the Holy Bull (gr. III), has a smorgasbord of features in his past performances that I found attractive: trainer Anthony Dutrow, sire Unbridled’s Song, a January colt, raced at three different tracks breaking his maiden at Saratoga, winning his last race by 12 lengths at Philly which provides the sentimental angle of Thinkin’ About Smarty Jones. Jockey Ramon Dominguez is a plus, although he can make me a little nervous at times – that’s the Thinkin’ About Scrappy T Tripping Afleet Alex angle, even though I hit that exacta, too. And then there’s his name: Winslow Homer. I mean, who doesn’t like Homer?

I’m almost prepared to place the Holy Bull runner-up, Jackson Bend, on my Derby contender list. He’s dominated his competition at Calder Casino & Race Course and he certainly was no slouch on Saturday afternoon. It’s just the whole Nick Zito trainer angle; I’ve been disappointed on a number of occasions. And I’m still holding a grudge against Birdstone. See sentimental angle listed in previous paragraph.

As for the the Lecomte Stakes (gr. III), I’m not exactly ready to toss back some ouzo and shout “Opa!” Ron the Greek had a tremendous stretch run – what’s not to love about that? But I had a tough time sizing up the field.

"The Lecomte is a race where everybody wants to see what they have, us included."

Let’s see how the Risen Star goes next month before I decide to jump on this μόδα.

And finally, it was the 9th race at Oaklawn Racing and Gaming – a little 6 furlongs allowance optional claiming affair - that elicited a “worth watching” notation. Backwater Blues (Dixieland Band) trained by Mrs.-Larry-Jones-but-please-call-me-Cindy-Jones-because-I-call-the-shots-around-here-now won over a sloppy track, defeating the highly touted Moojab. In this new decade of considering lightly raced 3-year-olds as Kentucky Derby prospects, perhaps Backwater Blues is not wholly improbable.

So my list of Derby hopefuls is officially underway. The Kentucky Derby Countdown Clock displays only 95 more days. Plenty of time to go to the track. 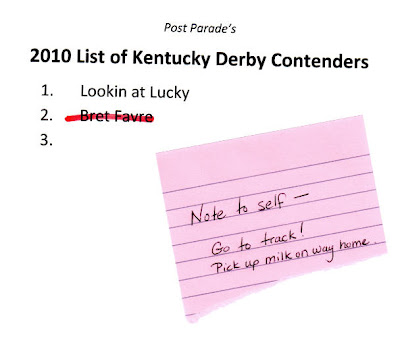