Saturday was a miserable day at the track.

First off, I was broke. Okay, not really "broke" as in destitute, but my wallet was devoid of any extra cash. My Racetrack Funds have temporarily been allocated to my daughters’ Wii Fund. As tempting as it was to reach into the blue envelope and secure a modest loan, I elected not to resort to financial shenanigans, thinking that this is how the whole Wall Street turmoil and bailout started. So I bummed $60 from my husband. Maybe that doesn’t sound so bad but he’s kind of a loan shark – he’ll have me cleaning the garage or refinishing the kitchen table or buying him a new Honda Accord. "Remember the time I helped you out when you wanted to go the track but were too lazy to stop by an ATM? Well, honey, could you help me out and [insert undesirable chore here]?"

Cash in hand, I headed over to Lone Star Park. And it was hot. Stifling hot. It was 102°F with a heat index of 422 Kelvin. Normally, Saturday afternoon at the races consists of relaxing outside in the Texas sunshine and enjoying the refreshing frozen treats of margaritas, but one could hardly stand to be outside for more than a few moments at a time without an overwhelming feeling of suffocation. The few hardy souls that spent the afternoon hanging out along the rail obviously had the innate ability to subsist without lungs. Everybody else retreated to the friendly confines of air-conditioned comfort in the grandstand or Post Time Pavilion.

My wagering strategies went down in flames. Twice I had two legs of a Pick-3 going only to see my final leg bomb. I didn’t box exactas; I wagered on the wrong race; I bet Place instead of Win-Place on a longshot that won. When my bankroll dwindled, I ended up betting the chalkiest wagers just to recoup a few bucks. The mounting frustration had me thinking that it would’ve been a whole lot more productive just to have stayed home and put my head in an oven. Or outside. Same thing.

But the misery pressed on and finally peaked at the 6th race: the 13th running of the Carter McGregor Jr. Memorial Stakes, a little $50,000 stakes race for Texas-breds. Gold Coyote, a talented 4-year-old gelding, was running. He’d won 6 out of 9 times at Lone Star and had won the McGregor last year as well. One can even speculate that Gold Coyote put the spark of Derby Fever back into Clarence Scharbauer, Jr. Anyway, I had a solid exacta and a possible blog story, Texas Racing Heroes: The Legend of Gold Coyote and the Scharbauer Silks.

It was during the running of the McGregor that pacesetter, Upstream, began to fade at the top of the stretch and went down, tossing his jockey, Martin Escobar, to the dirt. And it was right in front of me; a bold reminder that there a couple of things that I really hate about horse racing – seeing a jockey lying motionless face-down in the dirt and watching a horse with a broken left foreleg load into the horse van for The Final Trip. 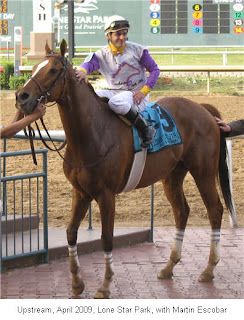 Upstream had been the first winner at Lone Star Park this season, having won the Premiere Stakes on opening night. He was also my first winner this meet. The 6-year-old chestnut gelding had won $273, 820 over 35 races, winning 9 times. He had been the 2007 Texas Champion 3-year-old Colt/Gelding, having won a stakes and two six-figure stakes placing as a 3-year-old. He was competing in modest claiming races and starter handicaps for the most part as of late, albeit with some tougher competition at Oaklawn Park earlier in the year. Perhaps his racing pinnacle was winning a minor stakes race or two, but his trainer, Allen Milligan, entered him in the Lone Star Park Handicap (Gr. 3) last month. Granted, he was in over his head but he at least had a chance to race against the likes of It’s a Bird and Jonesboro.

Condolences to the connections of Upstream – I’m sure you had a miserable day, too.

Regardless, it was dismal. But what's there for a horseplayer to do? I’ll return to the track next week and hope for cooler temperatures and colder margaritas and winning wagers and healthy horses. Unless, of course, I have to stay home and change the oil in the lawnmower.
Posted by suebroux at 6:04 PM

Sylvia Plath put her head in the oven for a lot less.

forget the lawnmower, go to the track

You told me you had a winning day. Does this mean no Blu-Ray for Fathers Day