Texas horse racing is foundering. Handle is declining, purses plummeting, quality racing diminishing, bettors bitching, and Fred-the-Beerman grousing that he doesn’t make tips like he used to. So in an effort to do something – because doing nothing has proved to be a pretty poor model – the Texas racetracks and Texas horsemen put their noggins together and devised a proposal: reduce the number of racing dates in Texas, effectively increasing the size of purses thus attracting better horses and fields thus attracting bettors thus increasing handle.

Apparently, not all Texas horsemen were in on this scheme. And they are not happy. Nor are they quiet.

The Racetracks/Most-of-the-Texas-Horsemen proposed a 48% reduction in racing dates, which includes eliminating thoroughbred racing at Sam Houston Race Park and doing something or other with a handful of Retama race dates. Losing that many racing dates would effectively put the small Texas owner/trainer/breeder out of business. It’s their livelihood. And if it were my livelihood, I’d probably put up a fight, too. 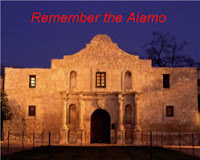 The horsemen dissidents – self-described mushrooms (“They have kept us in the dark and fed us crap for years”) – are valiant defenders of the status quo. True to their beliefs; fighting for the cause. Much like the defenders of the Alamo – except that didn’t exactly turn out too good for those guys.

Out of this opposition emerged a leader, Joe Kerby. He operates a breeding business in Salado, just north of Austin. In an impassioned letter to the Texas Racing Commission, he argues his case for 155 racing dates throughout Texas:

Apparently there is an assumption that “better” horses generate more handle. Lone Star Park’s Grade III races, with their large purses, handle far less than an allowance race bet at places like Gulfstream Park or Churchill Downs, or the New York and California tracks. Quality horses do NOT beget handle. Reality is that bettors prefer to bet on full fields of reasonably matched horses. Write races that will be more attractive to bettors, and handle will increase.

Well, I’m neither breeder, owner, trainer, nor odd-ball horseman. I’m a bettor. And I know numerous other bettors. And bettors want better. So yes, I’m all for writing races that are more attractive to bettors; quit filling cards with older claiming maidens and non-winners of two. But with purses sitting at $150,000 per day, it doesn’t exactly attract the likes of Afleet Express.

This is a troubling assumption. How can horsemen afford to maintain stables? Good trainers – those that provide good feed, excellent veterinary care, and top notch training –can’t afford an operation such as that. According to trainers Dallas and Donna Keen,

It costs on average $2500-3000 per horse per month to have a horse in race training. Lone Star Park was the only track someone could break even at if their horse didn't win at least one race a month, but they still have to run second in an allowance type race to make enough money just pay for their training.

Owners are reluctant to send their horses to Texas, as their horses have to win every race they’re entered. Trainers see their clientele dwindle. Moving their stables to other states, be it Louisiana or even Iowa, becomes attractive. You got to make some money – you still got to pay the hay guy.

So what does that leave? The little operations – stables that can afford to run at that purse level - and a bunch of skinny fillies? Is that going to fill grandstands and increase handle? Truly, is that our vision of Texas racing? Once so promising – hosting the 2004 Breeders’ Cup where superstars Ghostzapper and Ouija Board graced our presence – only to deteriorate to a sad conglomeration of perpetual claimers?

Additionally, there remains a conspiracy theory that racetracks are using their clout to expand gaming. “It’s all about the slots”, as some vocal horsemen proclaim. Now, I’m a conspiracy theorist at heart – I don’t subscribe to the Lone Gunman and Elvis is still alive, retired after years of working for the CIA and is now living under the name of Buford Winnebago in Ochlocknee, Georgia – but this is a case of economics. Racetracks have to sell a product (horse racing) and if the customers (bettors) don’t buy, racetracks go out of business. If the racetracks go out of business, then none of this will matter anyway.

True, there is a burning desire to bring slots and casinos into Texas by the racetracks, as well as other gambling lobbies. And each legislative session Texas horsemen are optimistic; the Almighty Slots will be the savior of Texas’ purses. Perhaps one day when the Baptist Convention isn’t paying attention, this will indeed happen. However, Texas racing is in trouble and it’s time to find a creative solution now.

One can only hope that a consolidation of race dates would be merely temporary and that there could be some sort of compromise between the opposing factions of Texas horsemen. Dialogue. Innovation. Creativity. Work towards a solution that is good for Texas racing.
Posted by suebroux at 10:28 PM 9 comments:

Horse Racing in New Mexico: A Tale of Two Tracks

Horse racing fans in Texas hear a lot about racetracks in New Mexico. Mainly that all the good horses are leaving Texas to race in New Mexico because they have higher purses, thanks to the Almighty Slots.

A recent trip to New Mexico afforded me an opportunity to briefly visit two racetracks, Ruidoso Downs and Sunland Park.

Nestled in the Sierra Blanca mountains of south-central New Mexico, along US Highway 70 - the aptly named Billy the Kid Scenic Byway, because we all know that Billy the Kid was a great environmentalist when he wasn't killing people - sits Ruidoso Downs. It's a small and charming little track, with an open-air grandstand and pleasant view of its surroundings. Unfortunately, the day of my little stopover was a dark day, so I relied on my imagination: Breathe in that mountain air, enjoy a cold beer, and watch and wager on horses; clearly an afternoon at the racetrack would be nothing but relaxing and enjoyable. 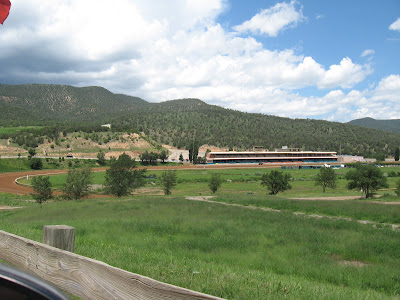 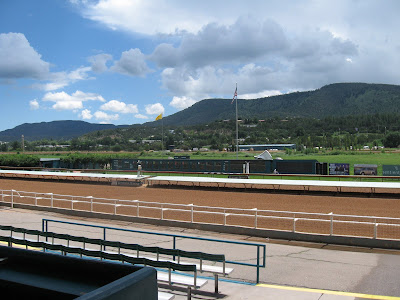 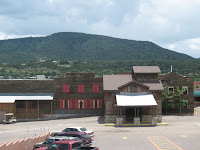 The facility is modest, however at one end of the grandstand there's an ugly addition: The Billy the Kid Casino, where all that lovely slot money is generated.

Well, it used to be generated.

Adjacent to the town of Ruidoso is the Mescalero Apache tribal land and their - you guessed it - casino. A few years ago, under a separate gaming compact with the state, the tribe opened a permanent temporary Travel Center (read: casino) 3 1/2 miles down the road from Ruidoso Downs. Within the first 18 months of its operations, casino gaming at The Billy the Kid Casino dropped 28%.

The racetrack's in trouble; competition from the tribe is driving the racetrack out of business. And now track and casino owner, R.D. Hubbard, is hoping for Lincoln County voters to pass the Business Retention/Gross Receipts Tax in a special election September 21. The community appears divided - the town doesn't want to lose the racetrack but hard-working taxpayers perceive it as a bail out for a failing gambling business. I wouldn't be surprised if the quaint racetrack becomes shuttered in the near future. And Mr. Hubbard will take his racing and gaming licenses and move his business somewhere else, probably closer to Texas.

At this point in my trip, I'm pretty confident that Ruidoso Downs isn't enticing all the good horses from Texas.

As for my quick stop at Sunland Park Racetrack & Casino, that also proved to be insightful: When it comes to capitalizing on maximum gambling dollars, it's all about location, location, location. Sunland Park, tucked into a tiny corner of New Mexico, is geographically greater El Paso, Texas, with a population of over 700,000. However, combine that with Ciudad Juarez, Mexico, the international metropolitan population is a whopping 2.2 million. Interestingly enough, you can go down Sunland Drive (in Texas), grab a lunch-on-the-go at The State Line Bar-B-Que (in Texas), and walk over to Sunland Park (in New Mexico) before you've taken a second bite of your brisket sandwich!

Here's a lovely view of the scenic backside of the track, the photo taken from Texas: 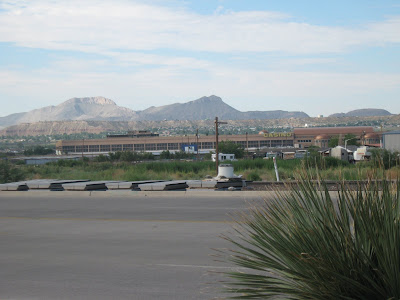 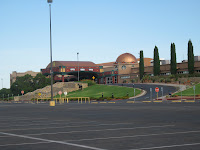 The attractive and well-kept grandstand isn't actually situated in the most picturesque setting, but there isn't any gambling competition and they can draw from a large population. Recently, Sunland Park Racetrack & Casino gave a $12 million grant to develop the local border crossing, because let's face it, there's nothing wrong with Mexicans' money either. 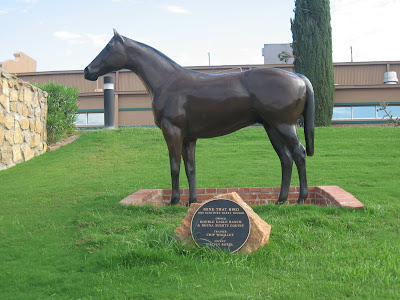 2009 Kentucky Derby Winner and favorite son, Mine That Bird proudly stands in front of Sunland Park Racetrack
Posted by suebroux at 12:20 AM 2 comments:

I recently returned from a family vacation in southwestern New Mexico. It should be noted that the verbiage family vacation is almost an oxymoron these days. In our youth, my husband and I enjoyed the long drives through the rugged deserts of the Southwest, stopping for scenic hikes in the wilderness, or soaking up Native American culture in little towns; bygone days. Instead, there's a continuous stream of Nintendo DS "noise" emanating from the backseat of the car from the two Gen Z traveling companions, with an occasional interruption of "Are we there yet?"

Anyway, I had hoped that during the trip that I could perform a brief reconnaissance of horse racing in New Mexico; lately in Texas, there has been much talk of racing in New Mexico, i.e., "Horsemen are streaming over the Texas borders to New Mexico, Louisiana, and Oklahoma where the purses are bolstered by slots!" Or something like that. So, I felt that it was imperative to discover where exactly all these folks are streaming to.

Interestingly enough, the only horse I saw on our vacation was at Roswell. In the International UFO Museum. 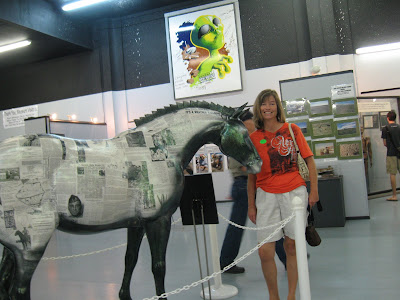 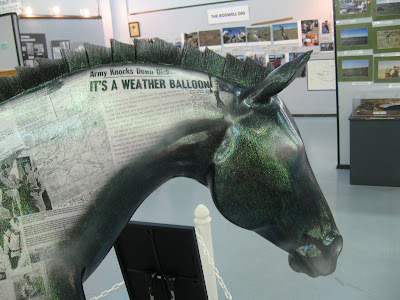 Oh, and its jockey, too. 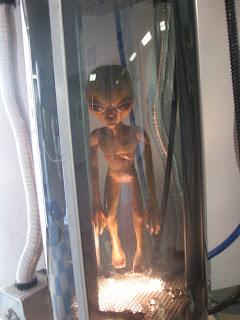 Okay, all kidding aside, we did include Ruidoso Downs and Sunland Park on our traveling itinerary. The visits to the racetracks were short and sweet, as this was technically family vacation. But, amidst the backdrop of Texas horse racing troubles, it provided this fan some food for thought that I'll soon be sharing ...