Last Sunday, my husband announced that he had a very big project that required his undivided attention – a marketing presentation, or building a better egg-beater, or something like that – and would I be so kind as to make sure that he would be uninterrupted for a few hours (read: get the kids out of the house).

So, I took my daughters to the track.

It’s not difficult to persuade my kids to spend a lovely afternoon at Lone Star Park. The beauty and grace of the thoroughbred, the pageantry of the Call to Post, the anticipation of the race, the exhilaration of a photo finish, the celebration of … oh, who am I fooling. It’s all about the ice cream. 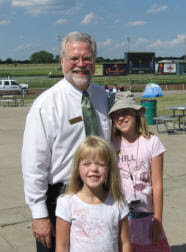 Super-Manager and Friendliest Guy on the Planet, John Records, usually bestows my kids with frozen treats, which they find a whole lot more exciting than an exacta payout of $89.20. It’s like a visit from Santa Claus. And remarkably, he sort of looks a little like ol’ S.C. himself, albeit “a slim and healthy Santa”, as noted by Alice.

While waiting for the arrival of Mr. Records, serendipity intervened: Quite by chance, I met Dan Leary, the new Director of Communications. What great luck! A potential font of information! A walking press box! Since the departure of a very accessible and easy-going Darren Rogers, I had been anxiously looking forward to his successor. And here was was!

“Wow! Wow! Dan Leary! I’m so excited to meet you!” I introduced myself and prattled on about my blog and writing objectives, feeling somewhat full of myself, and hoping to have the Director of Communications available for tidbits of racing-related information.

Apparently, the new Director of Communications is a telepath because Dan Leary just looked at me wordlessly.

Since I lack the ability to communicate telepathically, I continued to babble, recapping my recent Bob Baffert Trilogy, including the short entry on his wife, Bonny Brown. That elicited some brief verbal communication from Mr. Leary, such as her next gigs as well an upcoming feature about her on Dale Hansen’s Sport Special, information that may, or may not, prove useful at the mutuel windows in the near future,

Railbird Roy: Gimme a $10 exacta box with the 2 and 6, and five bucks that Bonny will play The Mexican Hat Dance after the Call to Post for the 4th race.

Needless to say, I was rather disappointed, at least until John Records showed up with ice cream and a smile. Of course, he had an excuse for Dan Leary’s restrained first contact: He’s from the East. “Dan’s a good guy,” John assured me. “He’s from the East coast, and you know how those guys are. Give him another chance. Now, let’s talk Big Brown.”

Okay, okay. Let’s face it, Dan Leary was probably somewhat unnerved attempting to communicate with some whack-o blond turf writer wannabe armed with two young girls twirling an umbrella and singing Hannah Montana’s “Best of Both Worlds.” What Director of Communication could possibly take me seriously?

Anyway, although the crowd was sparse outside (reminder for all of you who are from the East: This is Texas - the "crowds" are inside in air-conditioned comfort), the girls and I enjoyed the afternoon, even having a brief opportunity to meet the leading trainer ...er, who according to recent communication ... (oops) 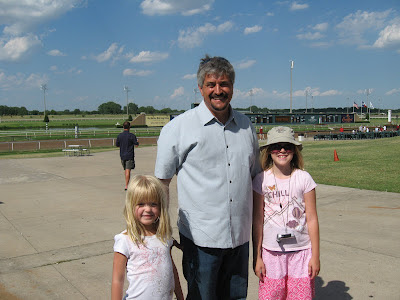 10 Pounds Proved to be No Handicap for Curlin

I’ve been having a little trouble blogging on horse racing topics in a timely manner. The kids have commandeered the PC this summer since having discovered the many joys of YouTube.

Sophie: Hey, Alice, you gotta see this – the kid is playing the Star-Spangled Banner on a recorder through his nose!

Anyway, Curlin impressively won the Stephen Foster by 4 ¼ lengths, having been assigned to carry 128 pounds - 10 pounds more than any other horse in the field, thus giving jockey Robby Albarado a rare treat to enjoy a Starbucks Double Chocolaty Chip Frappuccino® Blended Crème (1,670,655 calories per serving) between the 9th and 10th races at Churchill Downs.

Of course, the purpose of varying weights is to equalize the competitors. The racing secretary assigns the weights according to his evaluation of the horse's ability to win, or the quantity of bourbon that's in his morning coffee. Bell'e saggio Francisco of That's Amore Stable observed that

Racing secretaries are loathe to pile on the pounds — because horses’ connections have more choices now of where, when, and under what conditions to run — even the slightest attempt to level the field sparks outrage among the connections.

So the racing secretary felt that an extra 10 pounds on Curlin would equalize the field and perhaps keep Curlin's connections from complaining. I mean, what's 10 pounds, anyway?

To put the weight in perspecitve, I have compiled a list of common items associated with 10 pounds,

So Curlin dominated even with the additional 10 pounds. And now trainer Steve Asmussen is looking toward racing Curlin on the turf, with a possible start in the remowned Prix de l’Arc de Triomphe, which is French for Really Impressive Horse Race Somewhere in France. This scenario makes perfect sense since I'm sure the next handicap race he'll be assigned to drag an anvil.
Posted by suebroux at 8:41 AM 3 comments:

Reflecting on the Triple Crown

Big Brown did not win the Belmont. And there has been a deluge of information, misinformation, and opinions as to why the colt failed to capture the Triple Crown: He didn’t like the dirt in his face; he didn’t like Belmont’s surface; his quarter-crack was bothering him; the jockey gave him a bad ride; Dutrow is jerk; Dutrow is a classless jerk; Dutrow is a paunchy, classless jerk who could really use an extra dose of antiperspirant on hot afternoons at Belmont Park.

However, after spending many hours conducting thorough research – and remember, I’m a professional – by pouring over the plethora of information available, I was finally able to conclude with complete confidence that the blame lies squarely on Kent Desormeaux.

I have reconstructed the scenario as follows: Prior to the Belmont Stakes, Kent Desormeaux had to go to the bathroom, however the lines to use operational bathroom facilities approached 30 minutes, and since he was unable, as well as unwilling, to get out of line, he had his cousin, Mort, who is actually a baggage handler at Newark, step in and ride Big Brown for him. Therefore, Kent Desormeaux should be banned from going to the bathroom for at least two weeks. 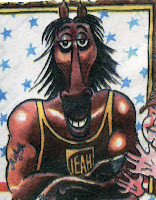 Anyway, it seems to me throughout this whole Triple Crown odyssey, there was so much skepticism and questions circulating around Big Brown – medications, steroids, trainer, owners, quality of the competition, Hooters – that the horse lacked complete, unabashed, and unconditional adoration from everything and everyone associated with racing save Michelle The Exercise Rider. C’mon, take a good look at the cover of the Daily Racing Form’s Belmont Stakes edition: renowned artist Peb Bellocq’s caricature of Big Brown looks like some kind of freak horse hopped up on steroids. Even tall and hunky Terry on Monmouth Park Blog proclaimed he was "glad Big Brown lost."

So, for all those Triple Crown maniacs who have spent sleepless nights immersing themselves into the Nirvana of Horse Racing, including multiple Road to the Roses virtual stables, office pools, side wagers with their parish priests, etc., there's always next year.

On Saturday, Steve Asmussen sent out a small platoon of 2-year-olds for the Texas Thoroughbred Association Sales Futurities at Lone Star Park. The winner of the colts-and-geldings division was Lyin’ Heart (Lion Heart), who after a rough start, rallied to win by 3 ½ lengths, earning an 89 Beyer Speed Figure in the process. According to Mary Rampellini of DRF, Steve Asmussen is looking to run in him the Bashford Manor (Gr. III) at Churchill Downs on July 5.

Maybe that will be a name in your virtual stable next year??
Posted by suebroux at 10:03 PM 2 comments:

Saturday is the Belmont Stakes, and Big Brown will attempt to become only the 12th horse to win the elusive Triple Crown. In honor of this momentous occasion, the popular Ms. Equine Etiquette returns to Post Parade to provide her advice and wit for racing fans as they eye Belmont Park.

Dear Ms. Equine Etiquette: I’m an avid horseplayer and have followed the sport for many years. I like Big Brown but I’m no fan of his connections. IEAH’s co-chief executive, Michael Iavarone, is a fraud. Trainer Dick Dutrow is a cheater, having been suspended on a variety of violations in the sport. How can any racing fan even embrace Big Brown’s Triple Crown bid?

Gentle Horseplayer: Although one might find it exceptionally entertaining to watch Mr. Dutrow and Mr. Iavarone run one and a half miles around the Belmont oval in nothing save their jockey shorts, one must remember that the Belmont Stakes is a horse race. It is the horse that displays its talent and athleticism, and it is the horse that which the horseplayer cheers. Big Brown has displayed extraordinary ability and it would truly be a disservice to disavow his talent due to his association with a few individuals with questionable reputations.


Dear Ms. Equine Etiquette: I regularly take the train to Belmont Park on the weekends, however I’m concerned about the number of people who will be on the train on Saturday. I anticipate that the train will be crowded. It’s not that I’m a xenophobe, but I find the smell, particularly body odor, in the enclosed space somewhat bothersome, almost to the point where I can get a little dizzy and unable to concentrate on my Daily Racing Form. Can you recommend something to ease my discomfort? Don’t tell me to drive because gas is way too expensive!

Gentle Horseplayer: One would think that in these days of effective antiperspirants and other odor eliminating products, that the aroma on crowded busses, subways, trains, ad nauseam, would be fragrant and pleasant. Alas, one can offer few alternatives other than a brisk walk to Elmont or an afternoon watching the telecast on ABC, perhaps followed by a lovely bubble bath. Of note, Ms. Equine Etiquette applauds your effort to reduce your carbon footprint, even under malodorous circumstances.


Dear Ms. Equine Etiquette: I recently read that there would be no dime superfecta wagering offered Belmont day. I’m greatly disappointed. I have a bankroll of $6. What kind of betting is available for a cheap horseplayer like myself?

Gentle Horseplayer: Ms. Equine Etiquette is known to refrain from providing handicapping advice as well proffering money management techniques except that one should never wager money that one cannot afford to lose. However, given the uniqueness of the race – the historical significance of a Triple Crown winner since Affirmed in 1978 – she would suggest that a small $2 Win wager on Big Brown might be in order. Obviously, a return of $3.10 would not be considered lucrative but the bragging rights for having wagered on a Triple Crown winner would be generational.


Dear Ms. Equine Etiquette: The Derby has the Mint Julep. The Preakness has the Black-Eyed Susan. What is the official drink of the Belmont Stakes? And would it be offensive to drink it out of a Dixie cup?

Gentle Horseplayer: According to the Belmont Stakes informational website, the traditional drink of the Belmont Stakes is the Belmont Breeze, a mélange of whiskey, Harvey’s Bristol Cream, juices, and simple syrup, that was created in 1998. However, since the tradition is not long withstanding, one can surmise that perhaps a more chic libation might be a dry Stoli Vodka martini with an extra olive or a Cosmopolitan, both of which would be considered exceptionally offensive, as well as boorish, if consumed from a Dixie cup.
Posted by suebroux at 12:06 AM No comments: