The Most Pitiful Belmont Recap Ever

Last Saturday, of course, was the Belmont Stakes. The final jewel in the coveted Triple Crown. And we all know the drama that unfolded: I'll Have Another scratched and retired; Union Rags squeaking along the rail, edging out Paytner in a thrilling win; a teeming horde of 85,811 in attendance, wagering over $13 million; all-sources handle in the neighborhood of a gazillion dollars, or something like that.

All this Belmont excitement! And Lone Star Park sends out its press release that very evening:

Nothing about the Belmont Stakes??  Union Rags??? Even some kind of little, impromptu Triple Crown fiesta on the patio???

Well, if I wasn't discouraged enough with the state of horse racing at Lone Star Park, I only had to crack open my Sunday morning edition of the Star-Telegram (motto:  "Leading the industry in printing corrections!"). Directly above the Belmont Stakes recap was a short article of how I'll Have Another's scratch took a toll on the local racetrack's attendance; they were anticipating a crowd approaching 20,000.  Instead, attendance was a 10,586.  And then, in a quote that can cause serious heartburn for the avid horse racing fan, Vice President and Assistant General Manager of Lone Star Park, G.W. Hail says,

"Who needs I'll Have Another when you have Eli Young?"


That's enough to discard my morning coffee and reach for the vodka!

Well, I could very easily go off on a rant and tirade about a some dumb obtuse remark - menopausal women are very good at doing that.  However, I shall just stick to a few numbers.

Racetracks are usually in the business of racing horses.  Horses race for money.  Money is funded by handle.  26,519 people showed up for the Eli Young Band concert and the on-track handle was $332,835.  Belmont Stakes Saturday's attendance was 10,586 with a on-track handle of $477,635.  Without the use of pie charts, calculators, or any other kind of visual aid, I can reach a simple conclusion:  Concert goers do not bet.  They do not contribute to handle.  However, they contribute to excessive alcohol consumption and a trashed parking lot.  Horses are not impressed.

Look, I understand that Global Gaming is in the "entertainment business" and they are very successful using the facility as a concert venue.  That's not a bad thing.  What's bad is being negligent and indifferent to the very reason the racetrack is even in business. 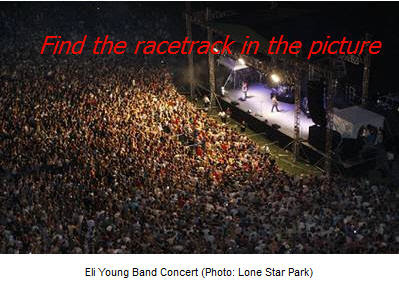 I'll Have Another
Dreams of the Triple Crown dashed
by tendonitis

Posted by suebroux at 1:12 PM No comments:


If you seek more original verse of the Triple Crown, be sure to visit Haiku for the Thoroughbred Racehorse by Barbsbitsnpieces of Napoleon, Ohio.  Or jump in and contribute your own Triple Crown Haiku prose.
Posted by suebroux at 4:42 PM 3 comments:

Two Degrees of Separation from Secretariat

It’s been a year or two since Affirmed last captured the Triple Crown in 1978. And now I’ll Have Another, with the Kentucky Derby and Preakness jewels already stashed in his saddlebag, is attempting to become the 12th Triple Crown winner.

Coincidentally, Kate Chenery Tweedy, author of Secretariat’s Meadow and daughter of Penny Chenery, was in Fort Worth this weekend as a presenter at the AmerEquine Festival. Kate would be the hippie, older daughter for those of you at home following along with your Secretariat movie. 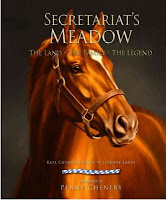 Anyway, Thursday night she held a book signing; an opportunity to meet an individual that had been closely associated with the great racehorse, Secretariat. Kate Chenery Tweedy is a genuinely fascinating and vivacious woman, willing to share her rich family history and anecdotes about growing up, and her familiarity with horse racing. She is truly lovely and I felt privileged to have almost touched history. Magical!

Okay, but you know that I didn’t drive all the way to Fort Worth and elbow my way into a crowd of people just to hear about Granddad Chenery and the wonderful Meadow. So, I asked about her mother’s comments that were recently published in Andrew Cohen’s article in The Atlantic,

“I don't know Mr. Reddam personally but I think he should be embarrassed that the trainer he has chosen does not have a clean record.” [Penny Chenery]

Kate, as she invited me to call her, laughed. “Oh, you know about that article, do you? Well,” she continued, “Mom’s ninety and she’s done playing politics.” Sorry, Doug. The Grand Dame of Racing is speaking her mind - racing is not as clean as it once was; too many issues with drugs as opposed to Mama Chenery’s Old School Racing.

However, everybody in the book-signing vicinity all were genuinely excited about I’ll Have Another’s Triple Crown bid. A true champion! Unable to keep my mouth shut (as usual), I woefully lamented, “A great champion that runs straight into the breeders’ shed."  Kate grimaced and agreed; “champions” usually depart post haste from the racetrack to stud. But she admitted that she feared Secretariat may have been one of the first stallions to blaze the trail to direct stud duty. “Mom sold the breeding rights to a syndicate in order to pay the bills. The syndicate did, however, ‘allow’ her to race Secretariat for the rest of the year.”

Finally, I had to ask Kate’s opinion one last burning question: Did Diane Lane do a good job portraying Penny Chenery in the movie Secretariat? That question sent Kate into gales of laughter. “Oh, we love Diane Lane! She is so wonderful! But you have to remember that it was a Disney movie. Diane Lane portrayed Mother as a good, dutiful housewife. And I assure you, Mother was not much of a housewife! She should’ve been running a business.” 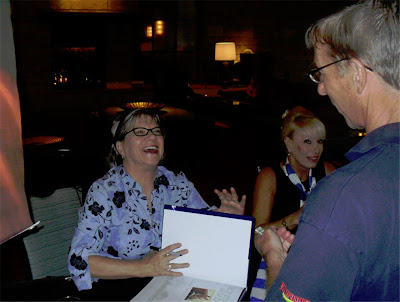