Generally, I refrain from posting about horse racing fatalities - they're downright unfunny. However, yesterday afternoon at Lone Star Park, a horse ended up in the infield lake. Gary West posted a brief in this morning's Star-Telegram,

Jockey Bryan McNeil was taken to a local hospital and Mr. Smee ended up in one of the infield lakes after Saturday’s final race ... When the field of older horses entered the turn of the turf sprint, Mr. Smee appeared to be in distress. As he ducked in, McNeil fell off the side, and Mr. Smee ducked through the inside rail and then into the lake, where he died.

Regardless of the fact that Mr. Smee was racing for a $15,000 tag, he certainly deserves a better epitaph other than he was a lousy swimmer. The 5-year-old Texas-bred chestnut gelding was trained by Cheryl Asmussen and had bankrolled $109,756 over a 37 race career.

Oddly enough, I don't recall ever reading or hearing about an incident such as this. Why would a horse run into an infield lake? Granted, it was 100 degrees here yesterday, as well as an Warning Level Fuchsia Ozone Action Day, but into a lake?? And what of Mr. Smee's legacy? Will PETA demand the ban of hot summer days and infield lakes?

The Fort Worth Star-Telegram was proactive on this recent accident. On page 11c of the sports section, right next to Lone Star Park's highlights, insights, and selections for today's race card, was the following column,

Don't take safety for granted on next trip to lake

Industrious Duo Spend an Afternoon at the Track

While many of my horse racing brethren have been heralding the races at Belmont and Delaware this past weekend, I find that it is imperative to thunder recognition to Texas, as Saturday was Stars of Texas Day - a day filled with quality racing. Numerous stakes races. Tremendous fields. Thousands and thousands and thousands of people. I should also mention that it was Dollar Day.

The dollar was a popular commodity: parking, admission, programs, sodas, popcorn, hot dogs. Dollars, dollars everywhere! There were so many dollar bills at hand that jockeys and bartenders and mutuel clerks and Frank Stronach all showed up in G-strings in an effort to reel-in an extra buck or two. But the most notable dollar score was, of course, beer.

As I meandered amidst the throng, I encountered an enterprising duo, Jason and Cole, who, on each Dollar Day, create a $1 Beer Can Pyramid, made out of - surprise! - beer cans, as there are many many beer cans and they are very very accessible. Jake and Cole then take bids from the many many people who have contributed "elements" (read: empty beer cans) to its construction, to perform the actual demolition of the pyramid.

Me: So, Jake, are you telling me that some drunken doofus would hand over a lot of dollars just to knock down a bunch of beer cans?
Jason: Yeah. Last Dollar Day some dude paid us $100.

Who needs to gamble?? 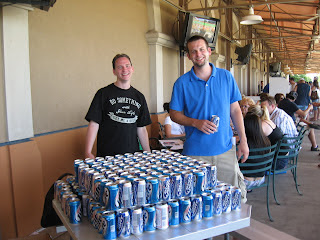 Jason, from Arlington, Texas, and Cole, of Irving, Texas, begin assembly of their retirement fund
Posted by suebroux at 10:53 PM 2 comments:

The 4th of July holiday had our family and friends lounging poolside, imbibing cold beverages, sharing anecdotes, jokes, recipes, dreams and visions, names of good mechanics, critiques of various B movies, and so forth. After a beer (or two, maybe three … perhaps more), it was easy to throw out a few glib remarks, “Oh, honey, it’s completely understandable that you don’t know how to operate the clothes hamper so I don’t mind picking up your stinky socks on the bedroom floor,” or “There is nothing more I would rather do than devote my entire Saturday night watching the History Channel and eating Red Baron Pizza. Pfft! Who needs a babysitter?”

Or, “If Curlin runs in the Arc, I’m gonna go to Paris to see the race.” 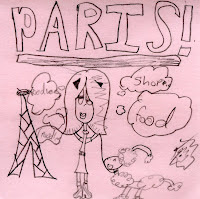 Apparently, somebody in our household took that comment seriously. Over the past few days, I have discovered sticky notes posted strategically around the house - the refrigerator, my bathroom mirror, stinky socks on the floor – all the obvious places where I would see them. Each note demonstrates the artistry of a 4th-grader, touting Paris as the most fun-filled, escargot-eating hot-spot destination. Coincidentally, my 9-year-old daughter, Sophie, has made casual remarks about “needing a passport” just in case she goes somewhere that requires one, like Louisiana.

Last night, explanations were in order. I told Sophie that according to Gary West of the Star-Telegram, who is a very reliable source because he knows where Steve Asmussen parks his car,

If Curlin runs well Saturday [in the $500,000 Man o’ War Stakes at Belmont] – if, Asmussen said, he looks best in his turf debut – then he’ll travel to Saratoga for a couple weeks before going to France, where he’ll prepare for the Arc. He would have one preparatory race in France, Asmussen said.

And furthermore, I explained to Sophie, Curlin has some steep competition in the Man o’ War, including previous Breeders’ Cup Turf winners, Better Talk Now and Red Rocks. And finally, if I did go to Paris on my Arc Fantasy Trip, ya’ think I’d bring my 9-year-old??

* * *
The proper attribution is required for making this blog entry possible: Alan for publication of the word, “Paris”, and Michael, who recently used the phrase, “Breeders’ Cup Turf winners Better Talk Now and Red Rocks”, although it was merely a coincidence and I’m unsure if, in fact, there was any kind of copyright violation, but he’s a nice guy and he should be recognized more often.
Posted by suebroux at 9:31 AM 2 comments:

Recently, a couple of members of the TBA have received fame and fortune and accolades as well a national recognition for their contribution in disseminating important and useful information from reputable sources, i.e., not the beerman. Dana’s prose and questions was enough for NTRA President and CEO, Alex Waldrop, to put down his Starbucks Doubleshot® on Ice Beverage and pen a response to her in his NTRA forum. And good friend, John of Not to the Swift fame, conducted a swift chat with Bloodhorse’s former editor-in-chief and snappy dresser, Ray Paulick.

Well, not to be outdone by Dana or Ray Paulick’s New Back Pocket Boy, I scored my own interview with a high profile individual associated with horse racing: The guy from the Claritin commercial. 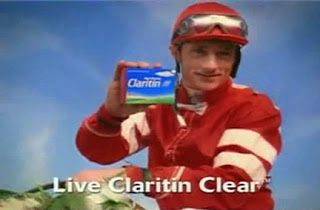 When the Claritin commercial first aired last year, it caught the attention of horseplayers: Horse racing in Santa Anita on mainstream television? Real horses? A real jockey?? Who is that guy, anyway??

Kevin Mangold is the actor who is the Claritin jockey in the commercial. He looks pretty convincing on a horse, huh? Well, as it turns out he is also a jockey. Apparently, he found himself consistently being cast as kids or elves or jockeys or munchkins or smurfs or some other diminutive character. Frustrated, he opted to take a hiatus from the lucrative world of Hollywood and embark on an odyssey to become a jockey because “he’s short.” I should mention that he was 35-years-old at the time when he opted to break into the world of thoroughbred racing.

I contacted Kevin Mangold – a true Renaissance Man. Besides acting and riding, he's written books and screenplays, and has a production company just in case he has nothing better to do. He graciously agreed to an interview for Post Parade: 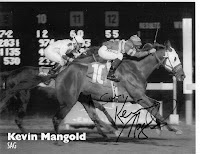 Sue: You have indicated that you first started riding at age 35. Had you ever even been on a horse before?

Kevin Mangold: No, not really. I had walked on an old quarter horse (Dutch). I used to climb up a fence to get on him and then he would walk around the pasture while I laid on his back. That's probably why I never even considered to be afraid of horses. As a kid, I had ridden a pony. There's a picture of it on my web site. His name was Harry.

S: Are you still actively riding (other than in the Claritin commercial)?

KM: Right this moment, no, but I haven't made any decisions about that yet. I have enough going on to keep me busy right now, but I have a serious horse jones going on. I can't go much longer without riding. I might have to buy my own.

S: What was the name of the very first horse you raced? In what type of race? Where did he finish?

KM: I believe it was Quick Twist [at Yavapai Downs on July 22, 2001] and he won. But my number was taken down because I bumped another horse. The other rider stood up in the irons and put on a whole show, but the replay showed that I barely came over. He wasn't going to win anyway. I came back and won with the same horse the following week. I was painted (the ritual when a jock wins his first race) twice in one week. After they painted me the first time, the objection was upheld and my number came down.

S: What was the name of the horse in your first win?

S: What was the name of the horse in the Claritin commercial? And was he also cast by Megan Foley Casting?

KM: There were a few. No, they were cast by trainer Matt Chew. He usually does the film things. He's got real well behaved horses and he's been around long enough to know what he's doing on a set.

S: Regarding being a jockey, you wrote [on your website in a response to a question], "It's dangerous. Every jockey I know has had a serious injury." Have you ever had a serious racing injury?

KM: I've had so many. I was unconscious for fifteen hours once. I broke my back in three places, my leg, my ankle twice. I've been in quite a few spills but I have been very lucky so far.

S: I enjoyed your slideshow on your website. When you are standing next to Chris McCarron at Hollywood Park, you do indeed look like a young Chris McCarron as one individual posted in a sports forum. You also have a picture of you galloping next to Gary Stevens. Did you give him any acting pointers?

KM: No, I never did. Maybe he could give me some. Gary is a great guy. I would love to see him act again. 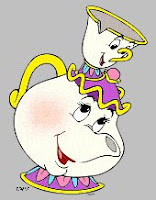 S: Speaking of acting, you recently starred with the renowned Angela Lansbury in the movie, Mrs. Santa Claus. Do you know if she enjoys horse racing? And what would you say was her best role, "Mrs. Santa Claus", "Jessica Fletcher" of Murder, She Wrote, or "Mrs. Potts" in Beauty and the Beast?

KM: I have no idea. I did that movie (Mrs. Claus) before I was a jockey. She was probably best in her live theatre days long before she ever did Murder She Wrote or any other television. I hardly spoke to her - rather she hardly spoke to us - but also on the show was (the late) Michael Jeter - one of the best people I've ever met. I miss him. 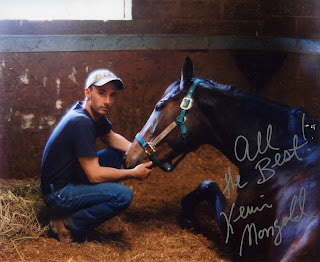 Since our interview, Kevin Mangold has popped up in another commercial and has been involved as a stunt double. No word as to when, or if, he returns to the saddle.
Posted by suebroux at 2:25 PM 5 comments: