I go out of town for one little week, and look what happens? Casey Abrams very nearly gets sent home from American Idol all because I didn't vote. Luckily, the judges saved him. Speaking of judges, I met Steven Tyler once a long, long time ago. And no, he's not the father of any of my children.

Anyway, last week I trekked to Oaklawn Park in Hot Springs, Arkansas. Last year, as an Oaklawn maiden, I was completely gobsmacked by the racetrack - oozing with rich racing history and a festival-type atmosphere. A return engagement was required. So my only objective on this particular Friday afternoon was to enjoy the ambience, drink a little beer, and make a little money.

As I perused through my 2011 Official Program, I noted an interesting blurb published below the 2nd race's past performances:

Oaklawn Park's legendary track announcer, Terry Wallace, now has a "meet and greet" following the sixth race on Fridays. If you recall, back in January he ended his record streak of consecutive race calls at 20,191 and enjoyed watching his first race on the apron. Well, apparently after 37 years, he's decided that handing over the microphone and mingling among the railfolk isn't so bad after all and now he does it on a weekly basis. 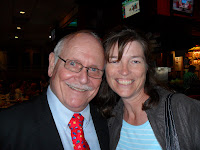 Legends are not to be ignored, so like a bubble-headed groupie, I hunted him down for a photo op. At first, I went to the wrong place and the only notable individual I could find was a guy working food service. However, I eventually located Terry - just as he was wrapping up his meet-n-greet in the Arkansas Sports Tavern. I requested a photo, drafting Miss Texas Torilla to snap the picture.

Unfortunately, there was no time for chit-chat. No opportunity to ask hard-hitting and fact-finding questions, like "What kind of pace can we expect to see in the Rebel?" or "What's up with your prominent display of the Beulah Park Twins' bobbleheads?" or "Do you know if Bob Baffert is going to be in town this weekend because I met him once. And I've met Steven Tyler. And now I've met you. Kinda like a pretty weird trifecta, huh?"

In retrospect, it's a good thing it was time for the 8th race. 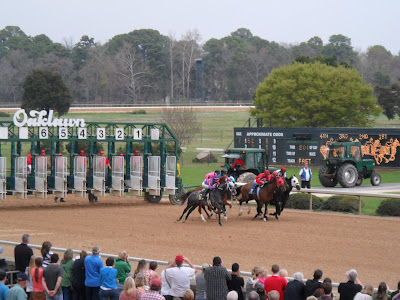 One of my favorite bloggers, Valerie of Foolish Pleasure, announced that today is her 4th Blogging Anniversary. In true celebratory fashion, she described her evolution from an "ill-informed blowhard" to a knowledgeable and confident horse racing commentator. And as a little anniversary gift for her bevy of loyal followers, she served up a modest list of some of her favorite posts.

Valerie got me to thinking about my own venture into this whole blogging business a few years back. I looked at my first post that read of sharing touts and "tidbits of information" and "occasional picks" a la some kind of handicapping whiz. What a crock!

Let's face it - handicapping and pedigree study and well-formed opinions just takes up too much valuable time, so unlike Valerie, I embraced devolution. It was a whole lot easier [and personally entertaining] to write about plastinates or Bob Baffert Adventures that, frankly, sharing some so-called analysis wasn't fun. So I haven't really learned anything from this blog other than a little grammar improvement and my biggest burning question, "Do I use a dash or a semi-colon?"

Who Is That Masked Handicapper?

A couple of years ago, I had the joy of experiencing the Fountain of Youth first-hand; basking in the glorious Florida sunshine and watching a collection of talented Derby hopefuls race around Gulfstream's oval. Whatever every happened to Scat Daddy, anyway? 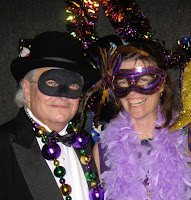 Nowadays, my jobs and kids and band practice and choir practice and 14 weekly loads of laundry and one ill-behaved puppy get in the way of keeping up-to-date with horse racing, much less any kind of horse racing adventure. This year's Fountain of Youth Results Ticker came at an unlikely venue: A Mardi Gras gala.

Saturday evening, as my husband and I arrived at a Mardi Gras party [and benefit for Arts Fifth Avenue, Fort Worth], we were greeted by a congenial masked well-known handicapper / turf writer. And in our brief meeting, as a stream of revelers continued to arrive, I was informed that Soldat had won the Fountain of Youth, "where he controlled a moderate pace and just ran away with it. Meanwhile, help yourself to drinks over at the bar."
Posted by suebroux at 9:19 AM 5 comments: