This evening I received my Lone Star Park Online Jockey Club All The News You Can Use And Then Some email alert. I'm usually appreciative of these little email alerts as they provide timely reminders of crucial events, i.e., Belmont Stakes, Dollar Day, Pick-6 carryover at [insert name of racetrack here], etc. Saratoga and Del Mar being no exceptions, of course. However, one item caught my eye ... and upset me greatly,

Wednesdays in August, from 5 to 7 p.m., Lone Star Park has the Del Mar Happy Hour with $2 Margaritas. $2 Margaritas!

This really has a burr under my saddle!

Son-of-a-.... Wednesdays are the ONLY day that I have to work the afternoon/evening shift at the lab.

Enjoy Happy Hour everybody.
Posted by suebroux at 9:55 PM 3 comments:

A Little Sparkle, A Little Zest Found at Lone Star 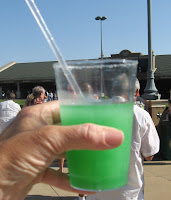 Attendance up. Handle down. But one burning question remains unanswered: What the heck did they add to my margarita that turned it so green?

Regardless of its color, it’s still the same tasty refreshment. Likewise, I can say the same thing about Lone Star Park’s 2010 Spring Thoroughbred Meet – perhaps the racing product wasn’t exactly “top shelf”, but it was still a fun and enjoyable refreshment.

Last year, racetrack management, toiling in bankruptcy misery and imminent auction, couldn’t provide a spark of innovation if they had a flamethrower. However, this year – energized with the impending transfer to Global Gaming – fan-friendly fresh ideas blossomed. Here’s a sampling of a few of the recent zesty racetrack happenings:

Jockeys & Java. I’ve been touting this trackside program since Dan Leary and his media/marketing posse whipped it up in May. People are eager to learn about horse racing and what better way than to ask questions, tour the backstretch, and walk down a shedrow while being bit by evil horseflies. After eating a free breakfast burrito, of course. The “special guests” featured on these programs were informative and entertaining; gladly fielding fans’ numerous questions. Of note, teeming millions showed up for the final installment of the program with guest, jockey Chris Landeros; don’t have the actual attendance figure but according to Hospitality Man, they went through 500 burritos. 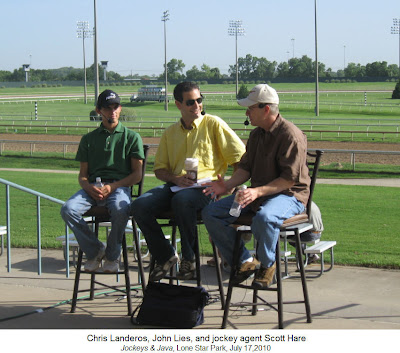 Additionally, Lone Star’s track announcer, John Lies, deserves a shout out for his involvement with Jockeys & Java. His interview style put the guests at ease and encouraged interesting topics and anecdotes. And not once did he say my questions were dumb.

Lone Star Music Series. Okay, I didn’t go to any of these concerts, but lots of other people did.

Clarence Scharbauer, Jr. The famed Texan of Alysheba lore is steadfast and true to the Lone Star State, lending dreams of greatness to Texas horse racing one day. His Coyote Legend won the $50,000 Premiere Stakes on opening day, won the $100,000 Texas Stallion Stakes on May 8, and won the $75,000 Assault Stakes on July 10. He earned the meet’s Champion Texas-Bred Male Award.

Party at the Park. Friday nights with $1 beers and great local bands, one of which included my favorite Beatles tribute band, Hard Night's Day. I danced at the track – literally. The cheap beer helped ... with the dancing, that is. 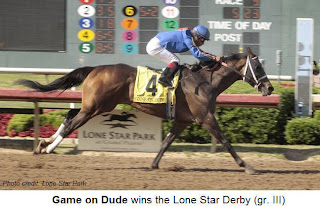 Recognition of racehorse rescue organizations. Lone Star Park aided Donna Keen’s fundraising efforts for her non-profit organization, Remember Me Rescue, with raffles and a chili cook-off. The care and well-being of horses after they’re finished racing is a concern for so many fans, and there’s a perception of indifference by the industry. I was glad to see Lone Star give the issue some high profile attention.

Chris Landeros. Last year’s leading jockey defended his title with 101 wins this year, just shy of a record. A couple of years ago, disgruntled with short fields and a shortage of mounts, this young man left California and was lured to ride in this region. At this writing, he’s committed to Lone Star Park and the PGA Tour. He’s loaded with talent and promise – California’s loss has been our gain. And he’s never had any kind of weight issue, which pisses off a lot of us chubby people.

Yes, there are money woes and sagging purses and handle decline, yet the spring meet was pleasurable. At this time, there are plans being hatched to improve the racing quality and make it more attractive to the serious bettors, however, I hope they don’t neglect those of us who enjoy horse racing as a tasty treat.
Posted by suebroux at 12:11 AM 3 comments:

Abner Doubleday and Don MacBeth are forever linked in the Great Big Book of History.

Okay. Truthfully, as far as I know, Don MacBeth had nothing to do with softball, or Abner Doubleday, for that matter. MacBeth was a jockey who assisted those less fortunate; a recipient of the George Woolf Memorial Jockey Award and the Avelino Gomez Memorial Award; first-class individual who passed away from cancer in 1987. A non-profit fund was established in his name to provide financial assistance to injured and disabled jockeys. 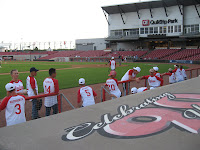 Lone Star Park – doing their part to contribute to the commendable cause – held their 2nd Annual Jockey Charity Softball Game this evening with proceeds benefiting the Don MacBeth Memorial Fund. A doubleheader, to be exact. Jockeys versus The Suits (read: Lone Star Park management and media who can pass themselves off as “fit”). Never one to pass up an opportunity to donate to a worthy cause and/or have my picture taken with really short people, I spent a little time at the ol’ ballpark to take in the festivities and heckle Drew Shubeck when at bat.

Disappointingly, there was not much of a crowd. Even more disheartening was the absence of Gary West – I had greatly anticipated watching him shag a fly ball or two. Maybe make a sterling leap over the centerfield fence, denying jockey Cliff Berry of the go-ahead run in the bottom of the 6th! I mean, who wouldn't want to give a hefty donation to see something like that? 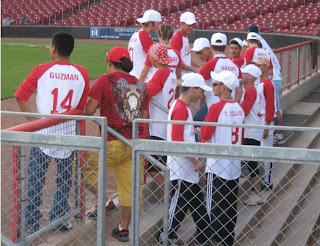 Jockeys in the dugout 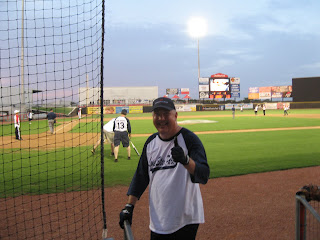 Lone Star Park's G.W. Hail gloats as the Suits soundly drub the jockeys in the first game of a double-header. 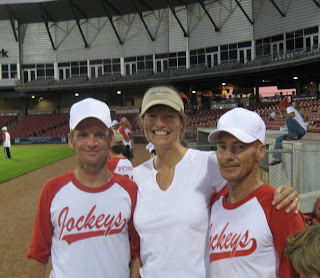 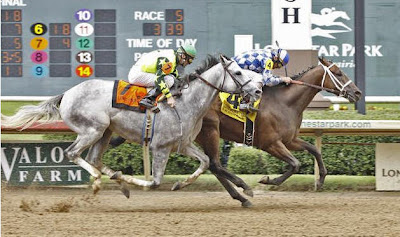