Lone Star Million Day - An Afternoon of Stakes and Beer 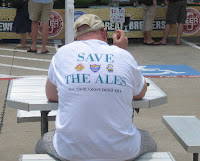 Last Monday - that's Memorial Day for all of you looking at a calendar - was Lone Star Million Day. It's the finest and/or richest day in Texas racing and/or beer consumption, because Lone Star Park also features the Studs & Suds Microbrew Festival that brings forth numerous individuals who may or may not recognize a horse other than the Budweiser Clydesdales. I know for a fact that my husband contributed more to the love handle than he did the on-track handle.

Lone Star Million Day brought a couple of notable jockeys to town, too. Robby Albarado was 2 wins away from the 4,000 Club and I was prepared to run over and take his picture in the winner's circle when reached the feat, however he had two seconds and two thirds. Meanwhile, le jockey extraordinaire, Julien Leparoux won three of the day's six stakes races, including the Lone Star Park Handicap aboard It's a Bird.

Unfortunately, it wasn't all fun, sunshine, microbrews, bouncy-houses and ice cream. Promising filly, Flibberjibit, shipped in from Florida to race in the $200,000 Ouija Board Distaff Handicap, took a "bad step" in the first turn, and according to trainer Martin Wolfson, incurred an injury that "looked like Barbaro's injury." Unhappy ending.

Anyway, neighbors joined me and my family and about 14,000 other folks for a great afternoon at Lone Star Park. And I'm delighted to share it with you.

Here's my husband, enjoying the Daily Double of Belgian microbrews, 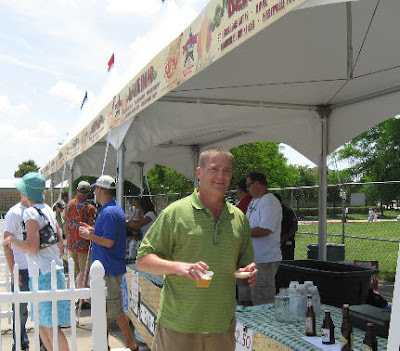 President and General Manager of Lone Star Park, Drew Shubeck (left), and Supermanager John Records (right) spend a moment with my daughter, Sophie and Maddie. Note to my family, friends, and regular readers of this blog: My other daughter, Alice, apparently had "better than things to do" rather than take time to meet the Lone Star Park brass, so the neighbor's kid, Maddie (in the pink cowboy hat) filled in for her. 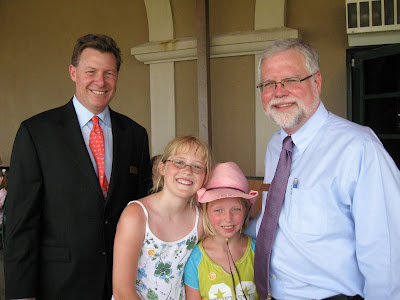 And here's Alice with "better things to do" 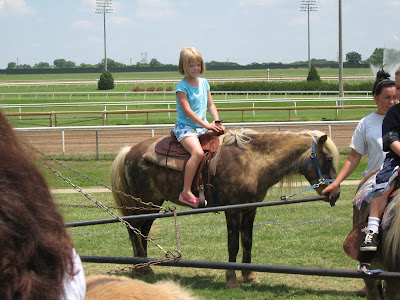 Seaspeak with Julien Leparoux aboard, winner of the $200,000 Dallas Turf Cup Handicap, 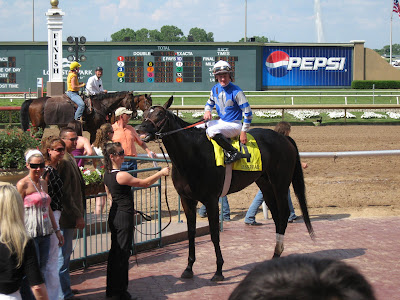 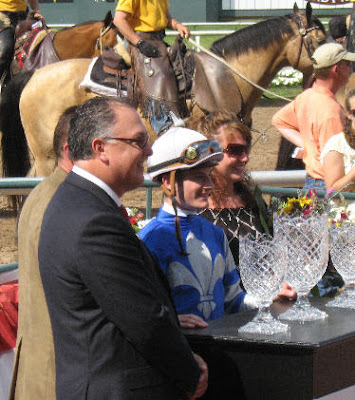 I made a feeble effort to procure a better photo of Julien Leparoux, meaning I loitered around the Jockey's Room exit after the races just in the off chance I might run into him. However, I just missed him so I settled for a picture of Jitter Davis, "one of the most conscientious Clerks of Scale to ever snap a towel." 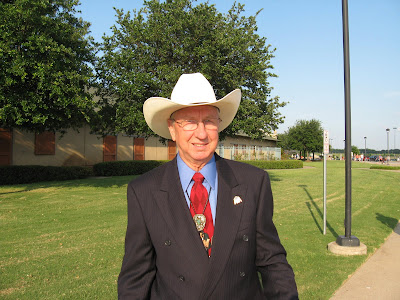 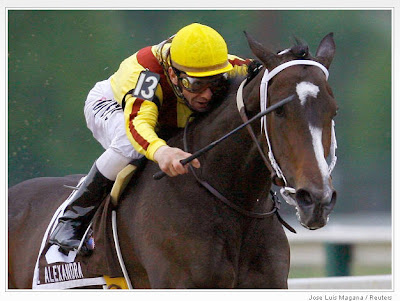 Note that it doesn't feature a Frankie Dettori Flying Dismount.
Posted by suebroux at 8:54 AM 2 comments:

Yesterday, I spent an enjoyable Mother’s Day with my daughters at the racetrack. So imagine my surprise when I sat down at the computer this morning to get caught up on the weekend action only discover that every turf writer and horse racing blogger in America ditched their mothers in order to report on a half-baked scheme concocted by some doofus to exclude Rachel Alexandra from Preakness.

Mother Paulick: Where are you going? Brunch hasn’t even been served!
Ray: I’ve got to leave. There appears to be a conspiracy brewing to keep Rachel Alexandra out of the Preakness next weekend. So please, enjoy the unlimited mimosas. And here’s a ticket to see Star Trek.
Mother Paulick: You’re such a good son, Boo-Boo Bear!

Of course, at this writing, the whole Mark Allen /Ahmed Zayat collusion has flamed out faster than a Dan Quayle presidential campaign. As Bob Baffert said [courtesy of a Churchill Downs / John Asher email ... check you Inbox because he probably sent it to you, too],

"That’s no issue – that was something that was just being mulled around and never really got any legs. I think it stems from Calvin Borel – I’ve never seen a jockey take-off a Derby winner. So that’s where it all started. But it’s dead – it’s a dead issue."

And to think I blinked and missed the whole thing. 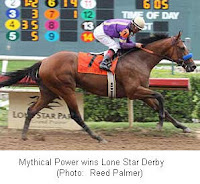 Speaking of Bob Baffert, he swooped into Lone Star Park this weekend for his annual sojourn to North Texas where he snags a graded stakes race and a couple of Whataburgers. On Saturday, Mythical Power won the $400,000 Lone Star Derby (gr. III) by 7 ½ lengths. An interesting note: Mythical Power previously came in second in the Sunland Derby, the same race that Mine That Bird finished fourth. Another interesting note: Lone Star Park’s leading trainer and Home-Boy, Steve Asmussen, has never saddled a winner in the Lone Star Derby. Next time I see him sitting on a picnic table at the top of the stretch I’ll ask him if it bugs him.

Which brings up another non-Rachel Alexandra point: Sunland Park in Wherever-it-is, New Mexico, might deserve a little more respect. Bill Finley at The Rail briefly wrote of "horses that ran in the [Sunland Derby] continue to turn in big performances in their next starts." However, I suspect that many horses from Sunland Park / New Mexico are racing well and should receive notice. Yesterday at Lone Star, Summer in Dixie, a winner of three consecutive races at Sunland Park, easily won a one mile claiming affair, wiring the field and winning by 2 ¾ length, while stepping up in class and/or dropping in altitude. 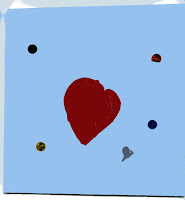 Ever since Sophie and Alice have been old enough to grasp a crayon in their little hands, I have been the beneficiary of some spectacular homemade Mother's Day cards. Each one is a treasure and I save each one, much to my husband's chagrin. And today, I was not disappointed.

Lovingly displayed on the breakfast table this morning was a large, blue, hand-made envelope, decorated with hearts and stickers. To Mom. Apparently, my daughters know their mother quite well, for written on the back of the envelope was the following, 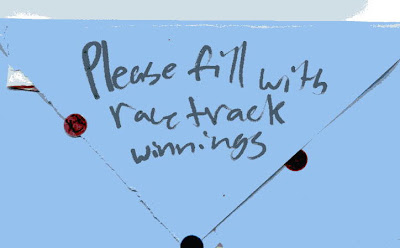 I laughed and was, momentarily, touched at their insight and humor. Then I had the Aha! Moment: A couple of weeks ago I told the girls, "If I win $400 at the racetrack, I'll buy you a Wii, along with Guitar Hero."

And their plans for me this Mother's Day? They're taking me to Lone Star Park. I speculate that I'll be betting a lot of longshots this afternoon.

Anyway, Happy Mother's Day to all the moms out there. And for those of us whose mothers are no longer with us, cherish their memories and remember the love.
Posted by suebroux at 10:34 AM 1 comment:

The Air Up There

I went skiing. Once.

This happy little Texan – living at an altitude of 430 ft – flew up to visit a cousin in Denver – altitude 5,281 ft – and subsequently ended up in Breckenridge, CO – elevation 9,600 feet. We immediately proceeded to a local ski rental shop, donned a pair of 322 pound ski boots, hefted a pair of 197 pound skis, and trooped across the road to the nearby ski resort. Well, my cousin trooped across the road. I made it to the curb, roughly 4 steps.

Sunland Park in Where-ever-it-is, New Mexico, is at an elevation of 3,789 ft. Churchill Downs is at 440 ft. It’s noteworthy that Kentucky Derby winner, Mine That Bird, has been in residence in New Mexico since the Breeders’ Cup. Our good friends over at Thoroughbred Champions have pondered this whole “altitude training” scheme. And, speaking as a clinical laboratory scientist [who’s unwinding with a very nice merlot at this writing], I believe that the idea has some merit. Granted, Sunland Park is not exactly on a Tibetan tableau, but there are reports that acute exposure to elevations as low as 700 m, or 2,333 ft, reduces maximum capacity of an individual's body to transport and utilize oxygen during exercise. Of course, the body requires a physiological adjustment or two – increasing the number of red blood cells and hemoglobin to transport oxygen to the tissue, lowering the maximal oxygen uptake. There’s gobs of papers and studies and articles and graffiti, articulating the regimen of high altitude training. However, I don’t believe that Mine That Bird fits in the “high altitude training” scenario; he’s been in New Mexico for months and has acclimated to the elevation, thus increasing his red blood cell volume/oxygen carrying capacity as well as improving the vascularity of skeletal muscle. I, for one, would be interested to know what Mine That Bird’s hemoglobin and hematocrit is compared to the other 18 Derby starters.

Uh oh. I feared that this blog entry would be filled with big, technical words. But it is something to ponder. Will the Road to the Roses someday lead through Sunland Park? Or Arapahoe Park? Perhaps Sherpas will get into Thoroughbred racing?

This morning is my first opportunity to replay the Kentucky Derby. I've been reading a sundry of blogs and columns regarding a muffed call, a snide trainer, an exuberant Cajun jockey, and an amazing overhead video of Mine That Bird's stretch run.

Haven't seen the video or tired of watching the collapse of the Cowboys' practice facility? It's a fabulous clip and Mine That Bird is remarkable.

Thanks to markilauren for posting the video.
Posted by suebroux at 9:54 AM No comments: