Wine For My Fillies

I enjoy reading Valerie's blog, Foolish Pleasure. And it's not just because I'm sucking up to her because she and five of her drinking buddies invented TURF. It's because she's smart. And intelligent and pointed and thought provoking, and if she were a mare, she'd burn her bra halter! Anyway, Valerie recently laid it on the line and detailed her own scientific and/or not-so-scientific observations that effectively surmised that fillies and/or mares that race in the U.S. are a bunch of wusses. Okay, she didn't exactly use the word wuss; she alluded that horse racing in the United States is "pitifully locked into a myopic mindset when it comes to challenging open company events." This is a very important phrase because I'm planning on working it into my future dissertation.

Anyway, Valerie provided some food [but mostly wine] for thought. I pondered over a rather modest sampling ...

Blind Luck? Has she ever raced in open company? Wuss.

Never Retreat? Won the First Lady, not the Lady/Gentleman.

Secret Admirer? A lot to admire!

Well, that's not a very fair sampling but the wunderfillies that come to mind don't exactly reside on this side of the pond. And, as an interesting footnote, I read in today's issue of Breeders' Cup spam email alerts that European Sarafina is headed to Churchill Downs to race [against the boys] in the Emirates Airline Breeders' Cup Turf.

Not only is open company horse racing "pitifully myopic" here in the U.S., it seems borderline tragic. And speaking of tragic, there is nothing more tragic than the news out of Sheboygan, Wisconsin: 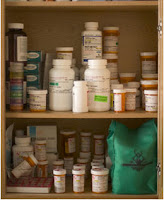 Oh, surprise. Trainer Richard Dutrow Jr. had his license revoked and was barred from racing in New York for 10 years. It appears that the state's Racing and Wagering Board’s ruling was based on two specific incidents that occurred last November: (1) Fastus Cactus failed his drug test and tested positive for butorphanol, and (2) Dutrow apparently enjoys keeping a collection of hypodermic needles containing xylazine handy. Or “xyzaline” if you’re following along at home with your copy of the Fort Worth Star-Telegram (motto: "Saving money by eliminating turf writers AND copy editors!").

This news raises a number of questions, such as “Why did it take so long to finally bust this guy?” and “What exactly is butorphanol and xylazine? And will those words be included in the National Spelling Bee?”

Of course, we here at Post Parade don’t have all the answers, but when it comes to drugs we might be able to shed a some light. As you are probably aware, we have a sound scientific background as well as Wikipedia at our disposal.

Butorphanol is a synthetic opioid analgesic; a narcotic pain reliever, similar to that of morphine. In humans it can be dispensed as a nasal spray to treat migraine headaches. In veterinary practice or in Dutrow’s stable, butorphanol is used to relieve pain making a horse easier to handle. It is considered five times more effective than morphine in controlling pain, beginning to alleviate pain within 15 minutes and lasting up to as long as 4 hours. It is a class A medication and prohibited for use in competitions. Interestingly enough, butorphanol is also used for sedation when combined with tranquilizers such as xylazine which, coincidentally, Dick Dutrow keeps on his desk.

Xylazine hydrochloride is a non-narcotic compound used as a sedative and muscle relaxant in horses. The drug reduces the respiratory rate to that of natural sleep. It has been successfully used in diagnostic, dental, and orthopedic procedures in horses. Xylazine has also been used to calm fractious animals as well as serve as therapeutic medication for sedation and pain relief following injury or surgery. And an extra tidbit of information: Xylazine is used to shorten musth in bull elephants, however it is extremely important to know that drug dosages vary between Asian and African elephants, so know your species before administering the drug. Also, be sure to “like” Xylazine on Facebook!

Whatever Dutrow’s “medication violation” this time, it’s not his first. His past performances of infractions and violations is damaging to horse racing. There needs to be greater strides to separate pharmacology from horse racing. Even if we have to go through one medicine cabinet at a time. 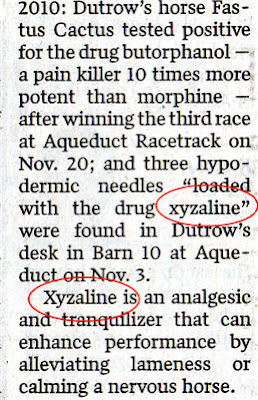 "Oh, look! Our local newspaper has invented a new drug!"
Posted by suebroux at 2:43 PM 2 comments:

O Curlin, Where Art Thou?

My husband tells me that my email Inbox is absolutely obscene. It’s cyber-stuffed with 648 messages that I think might be important, like Kay Bailey Hutchinson’s message, “Texas can do better” (2/4/09) proclaiming, “We must start now to bring bold, innovative leadership to Austin ... with your generous gift of $25 or $50.”

So, the other afternoon I perused through the cyber log jam of DRF Morning Line email alerts when I discovered a couple of very important pieces of information. (1) Alice’s pogo stick has been recalled (3/18/11) and, (2) the possibility of a Breeders’ Cup “showdown” between Uncle Mo and Havre de Grace in the Classic (10/5/11).

Malfunctioning pogo sticks aside, this was rather troublesome. Uncle Mo as an awe-inspiring and overwhelming dominant force in the Classic? Havre de Grace – “super filly” – comparable to that of Zenyatta?

Am I supposed to be excited? 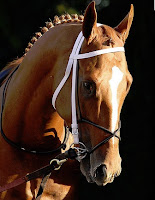 When I think of Breeders’ Cup Classic winners, I think of commanding and dominating horses that spent the entire year captivating the racing public, and the Classic is their exclamation mark on their way to winning Horse of the Year. For instance, take Curlin. In 2007 he raced in the Rebel, the Arkansas Derby, Kentucky Derby, Preakness, Belmont, Haskell, Jockey Club Gold Cup, all before he raced in (and won) the Classic. When Uncle Mo hasn’t been in sick bay, he’s raced in the Timely Writer, Wood Memorial, King’s Bishop, and the Kelso. True, Uncle Mo had an impressive 118 Beyer in the Kelso but his whole 3-year-old campaign wasn’t exactly what I consider dazzling.

And does Havre de Grace really get you roused like Zenyatta? Well, apparently even Breeders’ Cup is a little skeptical about that notion as I see in my Inbox an email from Breeders’ Cup (10/11/11 – hey, that’s today!) that Friday, November 4th will be the inaugural Zenyatta Celebration,

Celebrate Zenyatta’s Greatness All Day on Championship Friday
Come celebrate one of the greatest horses to ever grace the Breeders' Cup Winner's Circle. Zenyatta spent her career capturing the hearts and minds of horseracing fans everywhere.

As Kay Bailey Hutchinson might say, “Horse racing can do better.”
Posted by suebroux at 5:46 PM 1 comment: