I just got back from Minnesota.

One would think that a weekend jaunt to "one of those states somewhere up north" would provide a plethora of horse racing information.

There’s Canterbury Park Racetrack and Card Club, where every Tuesday afternoon is high stakes canasta and the jackpot includes 24 pounds of beef jerky, two boxes of Nestlee’s Hot Cocoa Mix, a pair of mittens, and an ice scraper.

Disappointingly, there was no live racing at Canterbury Park Racetrack and Card Club. Nor did I encounter any member of the honest MinTA And the only "Minnesota-bred" I observed was two draft horses pulling an Amish wagon. Horse racing topics eluded me.

But while I was hauling my suitcase, my carryon bag, my daughter’s carryon bag, my copy of Dave Barry’s History of the New Millennium (So Far) that I was reading on the plane and never got around to putting it back into my carryon bag, a piece of Therma Fitzgerald’s famous poppy seed cake with lemon filling that my Aunt Shirley insisted I bring back to Texas if I could get it through airport security without some hungry TSA employee deciding that it was a good time for a coffee break, that I questioned if I could – somehow, someway – compare this recent traveling experience to horse racing?

The answer would be no.

There is nothing relevant between traveling to Minnesota and horse racing. Clearly, I had nothing to write about.

However, the Blog Genie granted me a wish while I was away: Donna Keen, a.k.a. Mrs. Dallas Keen, visited my blog and she left a couple of nice comments. And she is revving up her own blog, Thoroughbred Race Horse Blog, where she provides first hand information and expert opinions regarding owning, training, claiming, and racing thoroughbreds. It is unknown at this time as to whether or not she will share with us some of her great fashion secrets.

Be sure to visit her sites. Feel free to ask, "What qualities do you look for in a horse when you make a claim?" Or "Can you please explain what does the word 'conformation' mean?" Or "Have you ever been to Minnesota? And do you play canasta?" Or just give her a warm welcome.
Posted by suebroux at 10:18 AM 2 comments:

Last night I met my favorite writer in the whole wide world, Dave Barry. He has a new book, Dave Barry's History of the Millennium (So Far), so he was in Fort Worth to launch his book tour.

I love Dave Barry and I take great strides to emulate his writing style, which is a fancy word for imitate, or copy, or borrow heavily, or rip-off. And as it turns out, we have many things in common. He is a humor writer. I aspire to be a humor writer. He has written a column about horse racing. I write a blog about horse racing. He has a daughter named Sophie. I have a daughter named Sophie.

Although we share many commonalities, there are also a variety of differences, such as he has won a Pulitzer Prize and I have not. He has a sewage-lifting station in North Dakota named after him and I do not, nor have I even been to North Dakota. Millions of people worldwide read his books. A half-dozen bored souls surfing the internet during their lunch hour glance at my blog.

When I met Dave Barry (read: got shuffled through the line for his book signing), he did take time to shake my hand - the same hand that shook Calvin Borel's hand that shook the Queen's hand. Ergo, if Dave Barry had never personally met the Queen Elizabeth II, he did, in some small, cosmic, 14-degrees-of-separation way, have an encounter with the Queen. And Street Sense. An impressive combination. And to think that I served as his conduit.

Anyway, I had hoped to ask him a few questions but there was precious little time to interview him while he signed my copy of Dave Barry's History of the Millennium (So Far), as well as my daughter's Disney World Official Autograph book, which by the way, I told him to sign it by Mulan but he signed it by Pooh instead. But if I had actually had the opportunity to conduct an interview, I'm sure that it would have gone something like this:

Me: As you may or may not be aware, Patrick Biancone's veterinarian, Dr. Rodney Stewart, received a 5-year ban by the Kentucky racing stewards for variety of violations including possession of cobra venom, levodopa, carbidopa, and some mysterious potion labeled "For Mythical Elmo Only". Do you think that this 5-year ban is a sufficient?
Dave Barry: No. He should also be subjected to a prostate exam.
Me: As you have probably heard, Frank Stronach recently announced his plan to eliminate Magna Entertainment's $750 million debt. What do you think of Frank Stronach and his debt elimination plan?
Dave Barry: He should have a prostate exam, too.
Me: And finally, I have a friend who has a fascination with headless Barbies. And it would not surprise me that if he should ever own a racehorse, he would, in fact, name his horse "Headless Barbie". Does your daughter have any headless Barbies?
Dave Barry: No, she has naked Barbies. And I also think that "Naked Barbie" is a good name for a racehorse as well.
Posted by suebroux at 9:38 PM 6 comments:

Genius Alan, who writes the award-winning Left at the Gate, has embarked on another serious and fruitful endeavor – he is writing a blog for the 2007 Breeders’ Cup. I find this incredibly amazing given that he has the ability to scribe 96,243 words every day at LATG and now has found additional time to further provide his entertaining insight to the horse racing populous. This surge of energy and creativity on Genius Alan’s behalf has led me to a number of possible conclusions, (1) he is taking shorter showers, (2) he skips going to the bathroom, or (3) he eats his lunch sitting at his PC, coating his keyboard with a patina of sourdough breadcrumbs and minced onions from yesterday’s lunch and an occasional splatter of Diet Pepsi. Regardless, I look forward to reading his supplemental blog.

But it bears to mention that I, too, once had a close encounter with the Breeders’ Cup.

The 2004 Breeders’ Cup was held at Lone Star Park. This, of course, was in the days well before some ne’er-do-well Bill Gates wannabe coined the word "blog" because the words "web" and "log" proved difficult to spell. But let me take a few moments to remind you of some of the famous horses that raced in North Texas a few years ago ...

Ghostzapper won the Breeders’ Cup Classic – Powered by Dodge. But how ‘bout Azeri? She would have been the overwhelming favorite in the Distaff and she could have finished her career with another Breeders’ Cup victory, however she raced against the males in the Classic where she finished a respectable 5th. I had even put a little money on her even though she was a hopeless longshot; it was a "girl thing".

In the Juvenile, longshot Wilko, at 28-1, beat Afleet Alex. It’s also the last race he ever won. By the way, that upset still bugs me. 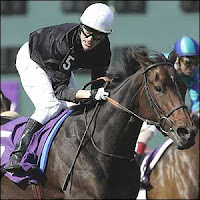 Ouija Board. What a superstar. Our BBC friends describe it best:

Horse of the Year, Ouija Board, rounded off a superb season with a stylish win in the Breeders' Cup after success in both the English and Irish Oaks.[BBC]

It was the first time I ever saw ladies wear pink cowboy hats. I thought they were very cool and in the following weeks, went on a mission to find one for myself. (I found them in a small shop located in the Fort Worth Stockyards).

Hopefully, Breeders’ Cup will return to Lone Star Park one day. And maybe then, I might write a real informative blog. All I would have to do is come up with about 96,199 more words ... every day ... (yikes)
Posted by suebroux at 11:02 PM 4 comments:

If You Are Going to Bite the Hand That Feeds You, At Least Dip It in Queso

Horseplayers and racing enthusiasts are suffering. They are suffering from the effects of dimwitted and near-sighted business moguls who see the riches of slots and use the guise of racing a horse or two around a dirt, or perhaps Tapeta, oval as the foundation of amassing gambling fortunes. The new Presque Isle Downs and Casino apparently, by a couple of first-hand accounts, has exactly three benches, two pari-mutuel clerks, and one beerman who doesn’t speak English to accommodate 25,332 people on any given race day. However, there is a spectacular and unobstructed view of the racetrack ... 5 hours before the first post. Up the road (or is it down the road?) at Philadelphia Park Casino and Racetrack, horseplayers are grumbling that, in order to enjoy their sport, that they are shoe-horned into the 5th floor of the grandstand as the remaining part of the grandstand is dedicated to the casino, because in the name, Philadelphia Park Casino and Racetrack, the word casino is strategically placed before the word racetrack. But there is an upside to having all the horse racing fans congregate in one place: When you call up your buddy, Eddie, and say, "Hey, Eddie! I’ll meet you over at the track," Eddie will know exactly where to find you.

Last year I wrote about my little excursion to Prairie Meadows Racetrack and Casino. It’s a nice place. The racetrack has a nice apron with a number of seats. At least I think it has a nice apron, if I could get to the apron but there was a casino in the way.

And how about Gulfstream Racetrack and Casino? The storied venue was razed and built in its place a large building with eight patio tables outside for the 17,365 patrons that watch the horse races and enjoy the Florida sunshine. But inside there is plenty of seating ... at the slots.

Good friend, Nellie, summed up her perspective on the dwindling services provided to the horseplayer,

No one cares ... it's sad, but true. I'm sure that a number of the people on the racing side of things have said more than enough, but were quickly reminded that [Presque Isle Downs] is a casino that just happens to have horses behind it sometimes. ...Remember, it isn't the racing fans that they care about ... it's the slots players.

I am not an opponent to slot machines. They are very popular, which is why most casinos devote 75% of their space to the machines. Their revenue at racetracks add to purses which can be positive for horse racing. But the drawback is that venues with slots are seemingly making the horseplayer secondary.

And we should do something about it. A resolution. Even better, a revolution! Racing fans, unite! Bring your lawn chairs!! Pull up alongside the rail and chant, "We are horse racing fans! We want more seats! We want shorter mutuel lines! We want a Jumbotron in the Presque Isle Downs infield! We want the 3rd floor at Philly Park! We want nachos for $2.50! We are horse racing fans!" And then to really get noticed, we should get David Beckham involved.
Posted by suebroux at 1:20 PM 3 comments:

Further Evidence That, Once Again, I'm Goofing Off 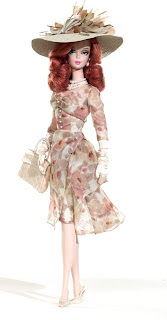 Barbie Day at the Races
obtained without the expressed written permission of www.pinkponytail.com