A couple of years ago - under the guise of being some sort of horse racing writer - I received finagled an invitation to spend a morning at Lone Star Park during workouts. Admittedly, I was pretty naive and green at the time, however I was fairly certain I could discern the difference between things like "horse" and "jockey".

When I went to the backstretch, I was absolute gobsmacked! It was a hive of activity, teeming with horses, jockeys, exercise riders, trainers, grooms, and "others" - horse racing folk that do something-or-another with horses and probably have very important job titles; horses moving on and off the racetrack with the grace and precision of the Bolshoi Ballet. All of this hustle and bustle every day in the backstretch; a secret world far removed from the mutuel windows. Who knew??

Last month, Lone Star Park rolled out Jockeys & Java, a program that gives racing fans a chance to watch morning workouts and eat a free breakfast, all the while listening to jockeys, trainers, and "others". Afterward, a tour of the backstretch with a visit to a trainer's barn and an opportunity to get bitten by some mean horse flies.

I've attended a few Jockeys & Java, and I have just one word: Brilliant. And I'm not trying to suck-up to anybody to score a wad of admission tickets or a free buffet at The Silks. Dan Leary and his little troupe of marketers and media-types have put some thought and energy into this program and it attracts a pleasant crowd of about 70-80 people on Saturday mornings. 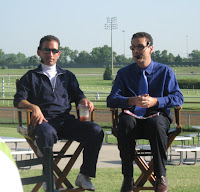 The very first featured guest was the articulate and stylish Aaron Gryder. He regaled the audience with some of his jockey experiences - 17 trips to Dubai including his $6 million winning one aboard Well Armed - as well as some of his personal philosophy ("I try to stay away from slow horses and fast people"). Additionally, he offered up his insight on maintaining his weight, indicating that he has a personal trainer and a nutritionist to keep him out of 'hot boxes' and shed 3-4 pounds prior to races. "I loose about 1000 pounds per year," he remarked jokingly. Clearly, any inspiration was lost on me because at that moment I was stuffing my mouth with a second breakfast burrito. 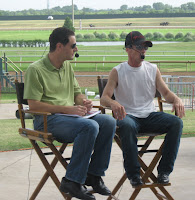 The program two weeks later, we were treated to jockey Bobby Walker, Jr., whose articulation and style is, er, somewhat different from that of Aaron Gryder. However, he's a popular fellow here in this circuit, and he's quite a character. I'm under the impression that he does not have a nutritionist; he has a mixologist.

As for the barn tours, the trainers that volunteered their services, such as Dallas and Donna Keen, and J.R. Caldwell, have been most inviting and informative. And the fans participating in the barn tours are respectful and adhere to the rules: no flash photography, no cell phones, and don't touch the horses. Usually there's some dumb dork that ruins it for everybody but so far I haven't encountered any dorks.

Jockeys & Java has been an entertaining, informative, and delicious program, at the same time providing horse racing revelation to fans. I, for one, am an appreciative fan and hope that the program continues in future meets. 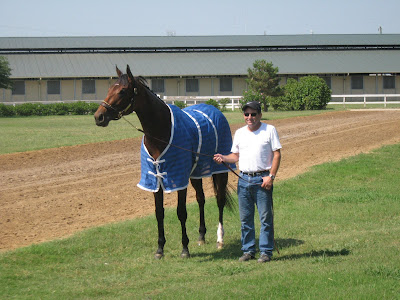 Summer at the Racetrack

I wish I was at the racetrack watching something like this, 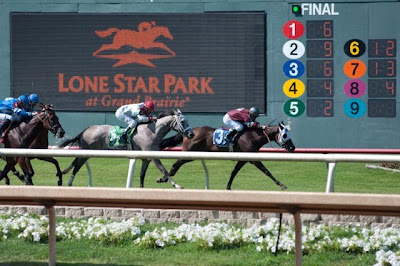 but instead I'm doing this,

No racetrack [or horse] in sight.

And there's so much news! Rachel Alexandra won the Fleur de Lis! Zenyatta won the Vanity Handicap, her 17th straight win! And all the excitement of Ascot! I don't even know who/where/what Ascot is! And Jockeys & Java, a remarkable program conducted by the fine folks of Lone Star Park over the past few weeks - so interesting/fan-friendly/entertaining - man, I wish I thought of it. But that would be the brain-child of Dan Leary, Director of Communication at Lone Star Park and Potential Star of Jersey Shore. Now I'm kinda feelin' bad about taking a swipe at him a couple of years ago ...

Anyway, I know that many of you are anxiously awaiting the details of breakfast with Aaron Gryder ... And you thought Jockeys was hot.

Meanwhile, gotta get a bunch of kids out of the pool.
Posted by suebroux at 10:23 PM 2 comments:

It's hard to believe that a mere week ago, I was at Lone Star Park's Jockeys & Java program, listening as renown jockey Aaron Gryder regaled the hoard of free-breakfast-burrito-seeking-horse-racing-fans about his victory aboard Well Armed in the 2009 Dubai World Cup. Well Armed, of course, is owned by a couple of Texans, Bill Casner and Kenny Troutt, of WinStar Farm, which is located in a very nice place somewhere in Kentucky. Noteworthy, the WinStar Farm juggernaut also owns the 2010 Kentucky Derby winner, Super Saver.

Then a couple of days later, quite by chance, I ran into Bill Casner himself! Okay, it really wasn't "quite by chance" as he was autographing photos of this year's Kentucky Derby winner's circle, as demonstrated by the photo below that he personally signed for me: 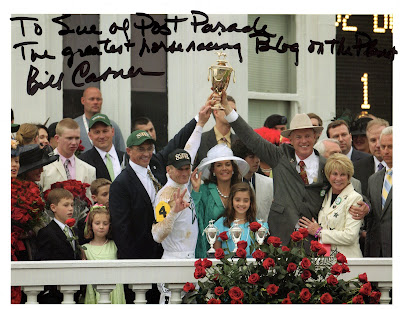 Just in case you require a little assistance in deciphering his writing, it reads,
"To Sue of Post Parade, The greatest horse racing Blog on the Planet. Bill Casner."

What a week! To think that I'm akin to Bill Casner and Well Armed and Super Saver and Drosselmeyer, in some free breakfast burrito sort of way.
Posted by suebroux at 11:32 PM 5 comments: