As many of you prepare for the upcoming Travers Stakes, I'm sure that you noticed this little ditty in The Blood-Horse,

Apparently, the workshop will be moderated by John Claude Van Demme Della Volpe, founder and president of SocialSphere Strategies. According to his C.V., he does a lot of stuff with polls and Web 2.0 (as opposed to Web 1.763). No word on whether he prefers Big Brown or Curlin. Or whether he's even made a pari-mutuel wager.

However, the pièce de résistance are the members of the marketing task force: Dana of Geldings O' Green (?), Railbird, Patrick, Kevin, and Troy of Loma Linda, whoever you may be. Excellent contributors! My heartfelt congratulations - I hope that you make a difference.

Of note: I was somewhat concerned to see that this summit was occurring in Las Vegas. I fear that there a numerous racebooks available to members of the marketing task force and there might be a temptation to feign a disease or develop a mild fever in order to excuse oneself and spend a few hours betting the races. However, the NTRA with their wisdom and foresight, according to the press release,

The Summit will begin with a private handicapping tournament for attendees on Sunday, Sept. 21.

The prize? Hopefully, a successful marketing strategy to develop a new generation of horse racing fans.
Posted by suebroux at 12:19 AM 5 comments:

Quite by chance, last week as I was conducting intensive research using my Google Search Engine, I discovered the whereabouts of the Turf Writer Formally Known As 'Eddie Mac at the Track'. Ed McNamara, sports columnist for Newsday, had entertained me on a weekly basis with his witty contributions to ESPN, and I found myself missing his weekend touts over the past year. So I emailed Ed McNamara and he delighted me with a response, informing me that he had to leave his ESPN contributor gig in May 2006, and used the extra time to write a book, Cajun Racing: From the Bush Tracks to the Triple Crown.

So how does some guy from New Jersey get interested in horse racing in Louisiana? Ed responded,

Always wanted to write a book, and when my ESPN days were done, I had the time. So I decided to make the leap of faith and go down to Cajun country for a week in June 2006 and do a reconnaissance mission. People were very friendly and open to the idea of a book and told me dozens of great anecdotes, so on I went with the project and kept grinding away. It's all in the introduction to the book. What an irresistible sales pitch, huh?

Clearly, I do not possess the talents nor skills of good friend and fellow blogger, John of Not to the Swift fame – it didn’t exactly sound like Mr. McNamara would be forwarding me my free autographed copy any time soon. Having written my own Louisiana horse racing stories, I felt compelled to read Ed McNamara’s book for a variety of reasons such as, (1) I know where Louisiana is located, (2) I have eaten boudin and crawfish, and (3) I would be on vacation over the next week or so and I thought that it would make for interesting reading while driving through the scenic Flint Hills on the Kansas Turnpike. But apparently, reading while driving is frowned upon. At least that’s what the Kansas State Trooper said when he pulled me over. 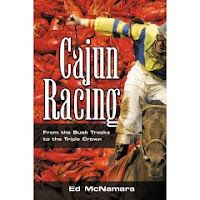 Anyway, throughout my vacation, I read Cajun Racing: From the Bush Tracks to the Triple Crown. Well, most of it. I accidentally spilled my Slurpee somewhere around page 30, while reading “Dirty Tricks”, and shortly thereafter, discovered that my 6-year-old, for reasons only logical to a 1st-grader, had pressed her blueberry Fruit Roll-up in the chapter entailing the Delhommes.

It is evident that Ed McNamara spent substantial time in southwestern Louisiana and interviewed a variety of individuals as his book is comprised of a gumbo of quotes. The origins of Cajun racing, as well as the locations and sizes of bush tracks is difficult to discern, which made me think that McNamara’s book could really use a good map. And some pictures. The only pictures are on the dust cover of the book and they consist of Calvin Borel on Street Sense, a couple of unidentified black and white pictures from someplace that I assume is in Louisiana because they are courtesy of Cajun horseman and former jockey, Kenward Bernis, and a pile of crawfish. And crawfish are not even mentioned until page 164 – you’ll have to take my word on it as there isn’t an index in the book. And it could use a good index as well.

However, Ed McNamara unfolds fascinating biographies of remarkable Cajun racing horsemen, such as Pierre LeBlanc and Junius Delahoussaye, filled with colorful anecdotes and warm memories of friends and family. Also, he provides the histories of Evangeline Downs and Delta Downs as well as laments the disappearance of bush tracks where on a Sunday afternoon there might be 20 to 25 match races - "My horse is better than yours!" - and the jockey might be a 7-year-old boy or a chicken.

The final portion of McNamara's book discusses the beginnings and success of today's Cajun riders, most notably, Calvin Borel and Robby Albarado. Calvin Borel's story is intriguing, but the remaining chapters seem light on the characters, instead focusing on the 2007 Triple Crown races or the toll that "reduction" takes on jockeys. The evolution of the book seemed somewhat disappointing and distracting from the original premise of the bush track glory days.

Anyway, Ed McNamara captured the stories and history of horse racing in southwestern Louisiana. And for his efforts, appreciative Cajuns will be sending him alligator sauce piquant and some bouilli. Ah c'est bon!
Posted by suebroux at 11:43 PM 4 comments:

Other than that, I’m not exactly sure what else has been going on in the horse racing world. I’ve just spent the last two weeks teaching religious education to a bunch of 7-year-olds. And it can be tantamount to a bad day at the track: hours of preparation and anticipation with a goal of success, only to be frustrated by the results,

Me: Who wrote the Gospel according to Matthew?
Joey: Luke???

Regardless, I'm compelled to provide my Big-Brown-free final thoughts of the recently completed 2008 Spring Thoroughbred Meet at Lone Star Park.

The good news was that attendance was up 5.2%, indicative that people were lured to the racetrack with the promise of some good horse racing and the real possibility of securing a Steve Asmussen bobblehead. However, handle was down 4.2% which, according to Lone Star Park President and General Manager Drew Shubeck, was probably more of a reflection of the economy; apparently, purchasing essentials such as gas, milk, and beer, takes precedence over wagering multiple Pick-3 tickets.

Steve Asmussen won Lone Star Park's Annual Steve Asmussen Training Title. For those of you scoring along at home, that is his 10th title. Jockey Monte Cliff Berry won the Frank's Energy Drink Model Search / Yodeling Contest. Of course I'm just kidding - he won the Jockey Title. And I believe that his ability to yodel was a non-factor.

Horse of the Meet was Monterrey Jazz. Somehow, I'm not inclined to agree with whoever stuffed the ballot box for this title. He ships in from California, runs a mile, wins, ships back to California, gets injured and sits on the DL, continuing to get heaps of praise for his performance in the Texas Mile. Meanwhile, 3-year-old filly, Storm Mesa ran very well at Lone Star, and once she discovered the Winner's Circle, she decided to take up permanent residence. She won the $100,000 Cinemine Stakes by 13 1/2 lengths. Then she shipped to Prairie Meadows and won the Iowa Oaks (gr. III). Then she shipped to Del Mar and won the San Clemente Handicap (gr II). Clearly, a very talented filly whose potentially illustrious career blossomed at Lone Star.

Of course, Lone Star Park also captured the attention of the horse racing world when Timber Trick flunked her drug test. The Anti-Asmussen Coalition focused on Texas, giddy with anticipation of a Steve Asmussen suspension and/or beheading. But more important was the fact that Timber Trick's hydroxylidocaine positive - contaminant or not - emphasized the importance of having a national standard for racing medication.
Posted by suebroux at 9:34 PM 3 comments: