Finding the time to write a few sentences has become a challenge of late. It's been Spring Break. And My Spring Break consists of Horton Hears a Who, Chuck E. Cheese's, and visiting the Fort Worth Zoo with 11.2 million other people last Friday.

My Spring Break is unlike Teresa's Spring Break, well-documented on her fine blog Brooklyn Backstretch - a spring break that consists of All-Horse-All-The-Time in the Mint Julep State. She's had a Keeneland Breakfast and an up-close-and-personal relationship with the Bobblehead Model of the Year, Smarty Jones. Be sure to visit her site and follow her exploits.

My Spring Break is also unlike Michele MacDonald. She's been in Dubai keeping us up to date with the ongoings before the World Cup over at the Dubai Racing Club. Fantastic photos and notes. Especially noteworthy is Curlin received accolades as the Sexiest Horse of the Year, narrowly beating out David Beckham.

Obviously, I need to do a better job planning My Spring Break next year.
Posted by suebroux at 9:21 AM 2 comments:

In an effort to reach a broader audience as well as make a whole lot more money, the 2008 Breeders’ Cup World Championships will card all five of its races for female horses together on the first day of the two-day event, Friday, marking the first time a major Thoroughbred event in North America has focused an entire day on female championship racing.

Response to this announcement in the horse racing community ranged from admirable and favorable to contemptible and deplorable with a smattering of references of misogyny and chauvinism. A number of my fellow TBA bloggers instigated an iPetition to express their displeasure with these changes, most notably, using the term “Ladies” in the Breeders’ Cup.

I have remained silent.

I have been reticent.

However, I shall be hesitant no more.

I am not opposed to a two-day format or adding a few more races such as the Dirt Mile, or the Polytrack 1 1/8 mile BC Route, or the Breeders’ Cup Beer Man Dash at 5 ½ furlongs, or whatever “championship” they want to make up. It’s a great opportunity to showcase more horses, more races, more wagering opportunities on a grand scale. However, I do not believe that in an effort to improve the Friday racing product that they should relegate the true championship races, Filly & Mare Turf and the Race Formerly Known As The Distaff, to Friday. How many of us can envision some of racing’s superstars, such as Ouija Board, Personal Ensign, or Azeri, running a championship race on a Friday afternoon? Ludicrous.

I also think that renaming the Distaff to the Ladies’ Classic is downright silly. My opinions are the same as all the other dissenting voices.

So I support the iPetition to Take Back the Race! However, you will not find my signature (at least at this writing) on the petition. It’s that pesky little text,

To show that we are serious about these matters, we pledge to protest by not attending, betting or watching the entire Friday card unless the Ladies' Classic name is changed and there are assurances from the Breeders' Cup to create a formal feedback mechanism from fans in ongoing marketing decisions of the Breeders' Cup.

I can’t commit to a complete boycott of the Friday card should the Breeders’ Cup Brain Trust elect to disregard the petition and proceed with their mutated format. I would enjoy watching and wagering on Country Star and Zenyatta as they face-off in the Breeders’ Cup Female Sensitiveness Classic.

Therefore, Teresa, Dana, Superfecta, et. al, go ahead and call me a wuss. But don’t call me anything stronger because I’m a girl and I’ll cry.
Posted by suebroux at 12:17 PM 1 comment:

While many of you are busy celebrating wedded bliss and/or your Pyro-My Pal Charlie-Yankee Bravo winning trifecta, I’d like to take a moment to share my own little blurb of excitement. After many, many, many months of toiling away at the computer, writing prolific and insightful drivel about horse racing, and consuming unknown quantities of liquid refreshments, all in the effort to entertain a reader or two, I will be having an article published in a real-live-delivered-to-your-mailbox magazine. 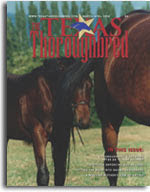 Texas Thoroughbred magazine's editor asked me to write a guest commentary for their upcoming issue. Granted, the publication isn't at most 7-11s, but it’s a great thrill for me.

Anyway, it’s my delight to share Amateur Hour at the Track (pdf warning), which is currently being previewed on the Texas Thoroughbred Association website.

My sincere thanks to editor Denis Blake for providing me this wonderful opportunity, not to mention, taking the time to read this blog.
Posted by suebroux at 10:30 AM 10 comments:

Since many of you are spending quality time dissecting the upcoming Gotham Stakes or singling Pyro in your Pick-6 at the Fair Grounds, I feel that it is my obligation as a serious and erstwhile pseudo-turf-writer-wannabe to provide the latest details in horse racing that may or may not affect you.

Yesterday morning, Julie Koenig-Loignon of Churchill Downs Incorporated, alerted me to some important information. From what I gleaned from her email, the horse racing industry is making a highly concerted effort to reach out and expand its fan base by courting those individuals who like to eat food.

This caught my immediate attention! What a fascinating and stimulating idea. But who the heck is Bobby Flay?

This, of course, required me to use my highly developed research tools (read: Google) and perform intricate and detailed examination of the new Poster Boy of the 134th Kentucky Derby Presented by Yum! Brands.

Conveniently, he has a website, which is cleverly called www.bobbyflay.com. There are recipes, FAQs, and other food-related stuff. However, there was no report as to which current 3-year-old he favored in the Derby Future Pool, nor did he provide any scoop as to how to improve the Mint Julep.

An Online-exclusive Letter to the Editor

Okay, horses and enthusiasts, it's been a while since I last scribed my thoughts, opinions, and factoids about the Sport of Kings. But as many of you know, I'm a busy Mom; there are numerous projects associated with that institution known as "elementary school", such as decorating Valentine mailboxes, reviewing fractions, making lunches, and assembling a hacienda made out of nothing more than an old Girl Scout cookie box, some red paint, and a piece of 3-year-old taffy. I have a couple of pretty good excuses.

But what's the media's excuse?

Of course, I would be referring to the dwindling space devoted to horse racing in the newspaper.

Living here in North Texas, I'm fortunate that a fine newspaper, the Star-Telegram, is delivered directly to the end of my driveway on a daily basis. And usually on Friday, or sometimes Saturday, there's a column by turf writer/cigar aficionado and good friend to Post Parade, Gary West. But imagine my dismay - nay, absolute frustration! - when I cracked open last Friday's paper, all giddy and excited to read the Professor's review of Curlin's sparkling performance in Dubai, only to the read the following:

Curlin off to fast start

Curlin begins his pursuit of greatness with a win in Dubai, writes Gary West in his online-exclusive horse racing column. Read it at www.star-telegram.com/horseracing. And be sure to click on the Ads by Yahoo.

Alright, I made up that last part. However, the Star-Telegram, in its effort to publish at least 2,176 articles and opinion pieces about Jason Kidd, has relegated its horse racing column along with its distinguished former President of the National Turf Writers Association author to the cyberworld.

Perhaps you're thinking to yourself, "What's the big deal about some race in Dubai? They don't even allow wagering there, much less sell Michelob."

Unfortunately, it doesn't just end there with the occasional turf column accessible only on the web. Simulcast results, including those of notable stakes races, are becoming scarce in the daily paper. I observed that results were sometimes published a couple of times a week, theoretically when space permitted, in the smallest font found on the planet, and are conveniently placed by Girl Soccer scores and the Bass Fishing report. Sunday morning I paged through the sports section to find out who won the Santa Anita Handicap and there was nothing. A stakes race with a $1 Million purse couldn't even score a half-inch brief in the paper. But do you want to know what did make the sports section? Kea Kometani's top 5 Hawaii-based TV shows, his favorite show being Lost because he apparently has the hots for Evangeline Lilly.

I find it rather disappointing that horse racing coverage is lacking in mainstream media. I'm sure that the racing industry is frustrated as well, especially in an era of attempting to find a new fan base. But its becoming the standard that in order to read and follow the sport, one has to be tuned-in or tapped-in or teed-up or whatever the phrase is, to the internet. Not that it's a bad thing because it gives me, an under informed horse racing fan, a forum to write about horse racing. But I'd rather be reading about it in the morning paper, while sipping my coffee at the kitchen table.
Posted by suebroux at 8:31 AM 2 comments: