Yesterday, I finally finished putting up all of our Christmas decorations. Well, almost. There's still a moderate junk-pile of Santas/reindeer/angels/snowmen heaped on the TV cabinet but they are well hidden from view, obscured by the TV remote/DVD remote/VCR remote/Cable Box remote/Wii remotes.

Anyway, the point to this holiday anecdote is our family's new Christmas ornament. Every year we purchase at least one new tree ornament, usually from a vacation destination, i.e., DisneyWorld, or to commemorate some wonderful life altering event, like adding a child or a guinea pig to the family. This year, adorning our tree, is our first ornament prominently featuring horse racing: Oaklwan Park. And I have lovingly given it a place of honor on the tree - next to Troy Aikman. 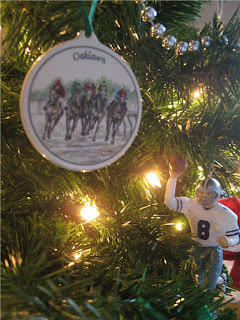 Interestingly enough, my husband does not agree that being next to Troy Aikman is an the place of honor; that would belong to Seven of Nine. 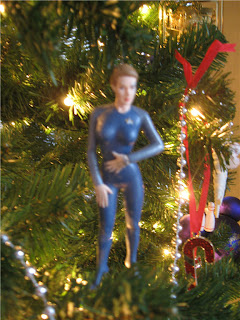 I’ve been away from my keyboard for a couple of weeks, and with good reason. I finally took the plunge and had Photo-Refractive Laser Thingy Vision Correction last week. So needless to say, looking at a computer screen was tantamount to Chinese water torture.

Anyway, yesterday I finally found some time to catch up on the recent events of the Horse Racing World. Zenyatta’s Farewell Parade … Baffert’s 2000th win … Layoffs at Lone Star Park …

A few days ago, Gary West reported that several employees of Lone Star Park were laid off last Friday. And as I continued to read his blog entry, I reached a startling conclusion: something was clearly wrong with my vision because it said that Post Time Pavilion Director and good friend to Post Parade, John Records, was reportedly one of the layoffs!

Confirmation was required; I called Lone Star Park and indignantly demanded to speak with Drew Shubeck. Mr. Shubeck was not available so I had to settle for the Vice President, G.W. Hail, who confirmed the bad news,

Sue(irate): What pin-headed moron would make such a ridiculously stupid decision to layoff one of the greatest and friendliest and affable and approachable people associated with Lone Star Park and in horse racing overall?!?!?

Okay, I really didn’t say that.

Sue: Mr. Hail, can you confirm that John Records was one of the laid off employees?

The gist of the conversation was that Lone Star Park – foundering without any real ownership other than bankrupt MEC which really doesn’t exist, and unknown intentions from Global Gaming – is trying to stay afloat and commit to horsemen that there will be racing next spring. And like a listing ship, struggling to make it into port, the captain orders all topside weight overboard. Not that I would consider John Records topside weight or anything like that.

It’s no secret that over the past few years, I have written of John Records, many times referring to him as Super-Manager and Friendliest Guy on the Planet. He knows customers, resolves troubles, chats up lively conversations, and is quick to share a laugh. I’ve brought numerous “first-timers” to the track and John has personally provided facility tours and shared insight each time. He is Lone Star Park’s biggest asset. If it were not for him, I would not have met Calvin Borel or Garret Gomez; John made much of horse racing accessible for me, the cheap bettor and turf writer wannabe. And he’s always been kind and generous to my children; Alice adores him, demanding on each sojourn to the racetrack that I “call my friend” so she can score some ice cream and dole out a giant hug. 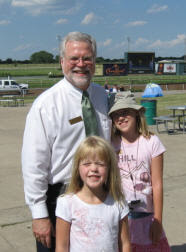 According to a source, some of the laid off employees will be invited to return to their positions come April, maybe sooner if the whole ownership debacle can be resolved. However, it would be of no surprise if some other successful and notable racetrack would snap up John. He is a treasure.

Good luck, my good friend, John.
Posted by suebroux at 10:02 AM No comments: