Horse Racing When You Least Expect It

We have one TV in our household. Well, not really. There is TV in the girls' playroom study junk room but it's small and the remote needs new batteries, which would explain why the girls have migrated into the family room and claimed the 50" flat screen TV as their own.

Anyway, last week as my daughters were watching Hannah Montana or some other lighthearted show on the Disney Channel, a brief infomercial - Disney's Movie Surfers - was broadcast (video), the movie being featured, Secretariat.

I've read the buzz. I've seen the movie trailers. And even in some vague subconscious notion, I knew that it's a Disney film. But I forgot about the kids! Horse racing on the Disney Channel?!? Who would've thunk!

The Disney infomercial included a little Q&A with "real life jockey", Kayla Stra. Kayla Stra, of course, was one of the featured jockeys on Animal Planet's "Jockeys". I remember that one of my TBA brethren - I can't exactly remember who, but I figure you know who you are - thought she was a real attractive reason to watch the show. So, whoever you are, this is for you: 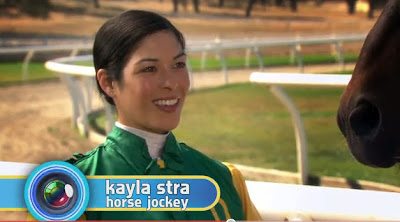 Kayla Stra featured on Disney's Movie Surfers
Posted by suebroux at 9:23 AM 2 comments:

So, taking out your handy-dandy calculators, you'll see that it comes to 100 days of Thoroughbred racing and a handful of gemistewurst because nobody really knows what the heck they mean by "mixed meet".

The good news is that there will be racing at all three Class 1 racetracks in Texas. The original consolidation plan that took a machete to 48% of the race dates was scuttled as it hurt too many horsemen whose livelihood depend on the Texas racing circuit.

The bad news is that there will be racing at all three Class 1 racetracks in Texas.

“We have to supply racing dates and support the horsemen even if we lose money.” [Bryan Brown, CEO of Retama Park]

Not a very good business model.

With less racing days, the racetracks can increase their daily purses. Lone Star Park, going from 60 days to a 52-day meet, can increase purses to $180,000 per day. Frankly, to some owners and trainers, that doesn't look any more appealing than $150,000 per day. And will this improve the quality of racing product? Or is it just providing life support for Texas racing?
Posted by suebroux at 9:25 AM 5 comments: