The word conjures up images of glitz and glamour and moviestars and expensive cars and paparazzi chasing moviestars driving their expensive cars. It's where many great movies have been made, like Gone With the Wind, or Little Miss Broadway. But it's also the place that gave rise to some pretty crummy movies, such as Jaws 3-D, or The Bad News Bears in Breaking Training, or some other completely worthless sequel. And let's be realistic - the sequel was invented by "Hollywood" because a particular movie was good and made a lot of money and "Hollywood" wanted to make even more money on the movie without any effort. Or plot, for that matter.

And it's in this "Hollywood" spirit that I provide this blog entry for the very nice Teresa and her loyal followers. Merry Christmas!

“Where is he?” bellowed Comet.

Huey looked up from his copy of the Daily Racing Form, clearly irritated at the impatient reindeer. “He’ll be here, he’ll be here,” he assured him. “S.C. says that if he screws up again this week, he’s gettin’ coal.”

Comet glared at the elf. “I’ve been hanging around Hollywood Park for a week! The Starlet could've been a cinch! 1:40.54 is nothing. I can go from Poughkeepsie to Cheyenne in that time.”

Huey snorted. “Aaah, c’mon, Comet. Country Star was impressive. And the odds on Grace and Power gave Mrs. C. a nice little hit on the exacta.” Huey shrugged and returned his attention to the Form. “We’ll get ‘em this week in the CashCall Futurity. We just need to get a rider.”

Comet let out a frustrated huff. He desperately wanted to race. And he had to race before Christmas Eve or else he’d probably lose his job to Rudolph. It was common knowledge on the sleigh team that Rudolph had been bucking for a regular gig for years and Santa thought very highly of him, ever since that one foggy Christmas Eve. “Red nose, my antlers”, Comet muttered to himself, “more like brown nose.”

All of a sudden, his thoughts were interrupted with the arrival of a jockey.

Startled, Huey dropped his racing form and looked up. “You P Val?”

The jockey gave a curt nod and glanced down at Huey. He quickly turned his attention to Comet. “This isn’t a horse!”

“Sure it is,” Huey assured him.

Comet started to say something but Huey quickly reached up and stroked his muzzle to keep him quiet. “Just depends on how you look at him,” he feigned sweetly.

P Val looked the animal over carefully. Then looked back down at Huey and said, “I can’t ride this horse – or whatever it is - in the CashCall Futurity, and I’m not riding for a dwarf.”

The jockey’s eyebrows shot up. “Elf?”

Huey nodded and wiggled his pointed ears in confirmation.

P Val stared at Huey. Then he stared at Comet. What in the world is that around Comet’s neck? Sleigh bells?!? He shook his head in disbelief. “What’s his name? Dasher?” he asked, half-joking.

“Pfft,” Huey sneered. “Dasher is a lazy bum who lounges around all day long, watching Oprah and Judge Judy, snacking on reindeer feed. This is Comet.” 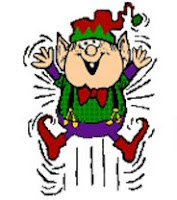 While P Val contemplated the situation, Huey hastily decided to sweeten the deal. “If you ride Comet, I can make that whole Nakatani fist fight thing go away.”

“You know, make it disappear,“ continued Huey, and then lowering his voice, “That whole Naughty List stuff. I know someone who can take care of it. Just ride Comet. Easy. You ride, we have our picture taken in the winner's circle, I cash in some nice winning tickets, Comet and I head back home, and we can all have a Merry Christmas." 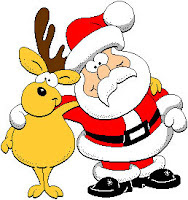 Friday night a horse will be assured of a post for the Kentucky Derby. Steve “Derby Trail” Haskin and a smattering of racing fans will have their attention riveted to the grandeur of Delta Downs and the $1 Million Delta Jackpot (G3).

For many of you including Garrett Gomez, who are unfamiliar with Delta Downs, Louisiana, USA, let me take the time to provide you with a little background; I’m qualified to provide this information because (1) my girlfriend, Jan, is from Louisiana, (2) I have driven through the state of Louisiana, and (3) I ate a crawfish once.

Delta Downs Racing-Casino-Hotel is located in the sprawling metropolis of Vinton, Calcasieu Parish, somewhere in Southwest Louisiana. Vinton, Louisiana, is noted for a variety of things that many horse racing fans may not know. It is the birthplace of the legendary blues musician, Clarence “Gatemouth” Brown. It is also served as the hometown of Major League Baseball Hall of Fame pitcher, Ted Lyons, who played 21 seasons with Chicago White Sox and was notorious for leaving three-day-old shrimp gumbo in the opposing team's locker room before a game. Also, if you rearrange the letters in Vinton, Louisiana, you can spell salivation union. And every year they host the Calcasieu Cajun Pronounciation Bee where contestants attempt to pronounce the word Calcasieu correctly.

Moderator: Pr’nounce th’word Calcasieu.
Garret Gomez: Excuse me, but I think you have me confused with Calvin Borel.

Actually, the history of Delta Downs, currently owned by Boyd Gaming (NYSE: BYD) and trading around $37 per share (hello? Frank??), are quite humble. Its origins were from a number years ago, when a couple of Cajun guys, Lil’ Bubba and Boudreaux, would saunter down to the local swamp every Friday night and hold crawdad races. People from all around Calcasieu Parish would come by to wager their hard-earned money on the racing crawdads, all the while feasting on boudain balls and meat pies. Crawdad races would last until the wee hours in the morning until all the boudain balls and beer were consumed, and then bettors, in their frustration, stormed the track and ate the crawdads.

Finally one night, Lil’ Bubba came up with a bright idea,

Lil’ Bubba: Hey! We could have a whole lot more races if we raced horses instead of crawdads! I betcha we could have a much bigger handle, too!
Boudreaux: My daddy’s got a small piece o’ land solid enough by the bayou and far enough away from the gators that we could set up a small oval. Somethin’ ‘bout 6 furlongs. Y’think that’d work?
Lil’ Bubba: Oh yeah. But how’d we attract some good horses?
Boudreaux: Slots.

Anyway, enjoy the Jackpot. And enjoy some great music by Clarence “Gatemouth” Brown (if you’re at work, make sure the volume is up so that your boss can appreciate this, too).

Posted by suebroux at 9:42 PM No comments: