The last Triple Crown winner was in 1978.  Affirmed.  And his name was spelled correctly. 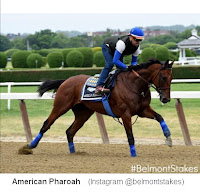 American Pharoah is attempting to put an end to this dry spell tomorrow in the 147th Belmont Stakes.  He could go down in history as the 12th horse since the Pilgrims landed at Plymouth Rock to win the Triple Crown.  And, as part of the nation-wide celebration, Spell-Checker would be updated.

We've all been inundated  with history, statistics, expert opinions, race scenarios, and static noise of how the odds are against him.  In the past 37 years, 13 other horses won the Derby and the Preakness but not the Belmont.  And this year, I say, American  Pharoah is the one to do it!

FYI:  Last year, I said, "California Chrome is the one!"  I even bought a #Chromies T-shirt to wear Belmont Day ... It conjures up such sad feelings I have not been able to wear it since :-(

FYI:  2012, I jumped on the I'll Have Another Band Wagon, only to fall off immediately when he had to scratch out of the Belmont due to injury.

FYI:  2008, I reluctantly gave into Big Brown.  He was pulled-up and finished last.  I shrugged my shoulders and headed over to the bar to have a beer.

FYI:  2004, the year of my biggest heartbreak ... Smarty Jones.  I will never forget how the roaring cheers were immediately silenced when Birdstone passed him in the stretch. *sniff*  The pain and suffering among the multitude of the fans and believers, the mournful mood of the grandstand ... until one [stupid] voice let out a whoop, "I got it!"  If I recall, dozens of people were prepared to give that dude a swirlie.

The point being, I won't bet against my horse regardless of the historical odds that are against him or the dismal odds on the tote, i.e., 1/5.  I'll stay loyal and true and faithful and excited; a fan of the sport.  History has recorded 11 Triple Crown winners so history indicates there will be a 12th.

And it may be tomorroah.
Posted by suebroux at 8:22 PM No comments: