A couple of days ago, FoolishPleasure, PhD, wrote a thoughtful post, Intersections, where her career afforded her the opportunity to teach a course that combined her "passions" - art history and horse racing. Nice way to earn a paycheck.

Coincidentally, my job recently intersected with horse racing. Well, sort of, anyway. I received my AABB SmartBrief email alert the other day, which has the "latest news stories of interest to the transfusion medicine and cellular therapies community" and generally lacks anything that has to do with horse racing. However, it recently reported that Neuralstem had received FDA approval to begin clinical trials on patients with Amyotrophic Lateral Sclerosis (ALS or Lou Gehrig's disease). 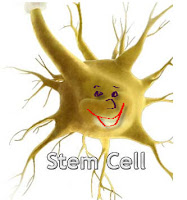 Admittedly, I'm no stem-cell-research-scientist hot shot. Frankly, I rarely even read my Smartbrief in my effort to do as little blood banking as possible. But this news really caught my attention because it's a significant step in delivering medicine to regenerate damaged neural tissue. And this year, horse racing has had more than its fair share of spinal cord injuries and damaged neural tissue. Of course, I'm referring to the serious injuries suffered by jockeys Rene Douglas and Michael Straight. Scientists and researchers are hard at work with their little Petri dishes full of stem cells, striving to make advancements in neural tissue regeneration, perhaps providing hope for many individuals afflicted with paralysis and other diseases.

Speaking of Rene Douglas, HRTV produced a mini-documentary update on Rene Douglas (VIDEO) that's featured on Bloodhorse.com. Take 7 or 8 minutes out of your day to watch it. Additionally, Brock Sheridan created a Get Well Card on Facebook for Rene Douglas, if you're interested in posting a message. There's also a Facebook 'card' for Michael Straight, as well.

There's little artistry and history in my "intersection" but there are certainly some interesting possibilities in the future.
Posted by suebroux at 10:59 AM

I guess another intersection between stem cell therapy and horse racing is the possible return of Lava Man.