The Fashionable Filly ... Well Sort Of

Over the past couple of weeks I've been teaching religious education to a cacophony of rambunctious fifth graders. I'm not much of a teacher. Frankly, there are days that I feel unqualified to be a mother. However, I definitely lack any credentials to be a fashion photographer.

A few months ago, it was touted that the Filly Phenom Rachel Alexandra would be featured in the August 2009 issue of Vogue magazine, having been captured on film by some notable fashion photographer dude named Steve Klein. The other afternoon, in a dither of excitement, I thumbed through the new issue of Vogue, prepared to pay my $4.99 plus tax all for the glory of possessing pages of amazing photos of Rachel Alexandra.

I returned the magazine to the rack and opted to save my cash. A brief one page articles accompanied a 'fashion spread' of a single photo. I've provided a simulation of the Vogue photo for your review, just in case it's not available at your local newsstand or you prefer to spend the five bucks on your next Pick-3. 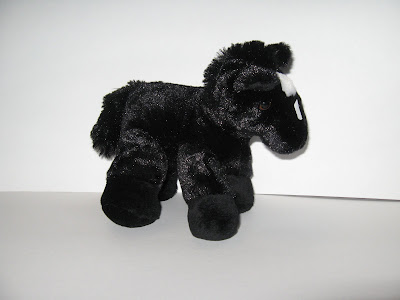 who's the hot honey on the cover?

You are Annie Leibovitz with a stuffed animal

The 'hot honey' - as you so eloquently wrote, Tony - gracing the August issue cover of Vogue is supermodel Christy Turlington. The accompanying cover story is "Christy Turlington at 40." That's 40?? Wow! When I turned 40 I looked more like Ethel Mertz.

And as for the use of my stuffed synthetic models: There is no shortage of stuffed animals in my 7-year-old daughter's room. It's a whole lot easier than venturing over to the local horse barns to obtain a model. And it's not as smelly.

Sue-Thanks for the ID on the cover shot..and by the way, don't sell yourself short- I think Ethel is cute and always loved her smile :)