Closing Day at Lone Star Park is Fun and Delicious

Today Lone Star Park closed out its 2009 Thoroughbred meeting. And of course, there's the usual doom and gloom regarding Texas racing: declining attendance, decreased handle, the mass exodus of good horses pouring over the border to Louisiana to race for bigger purses and boudain balls, etc. However, this afternoon I brought along a wonderful companion who easily overlooks all of the troubles facing the industry and just wants to have fun. Alice.

One day on a Sunday we went to the race track and the first thing we did is that my mom called jon reckrds. Then he had to have pichers taken with other peepel. He gave me ice cream with chocklate sauce. We talked about g-force and he had to go so I said who made the ice cream? An 11 year old boy made the ice cream so I made him a thank you note. And he is going to love the note and it said thank you for the ice cream From Alice. 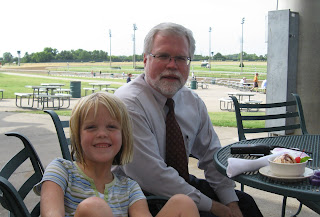 I made a new friend. I don’t know her name but she did not know where her bracelet was.

Okay, by now Alice has become completely bored with the whole notion of being a Guest Blogger and has pronounced that she “has a tummy ache” and can she “go lay on the couch” [and watch SpongeBob]. However, on the drive home she did launch off on a mini-tirade about the fact that she was unable to procure coveted jockey goggles from the Jockey Goggle Giveaway and it was no fair that she didn’t win any because Sophie won a pair a couple of years ago and then I informed her that Sophie did not, in fact, win the goggles but Gary West ensured that she was handed a pair of goggles by a jockey and that, coincidentally, Alice had just met Mr. West just before the last race and it was merely bad timing that Mr. West could not do the same for her as he did for Sophie, to which Alice grumbled, “What a rip-off!” 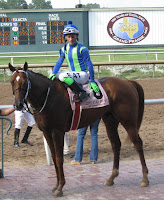 Anyway, Grand Slam Andre (Grand Slam) won the Middleground Stakes for 2-year-olds, having shipped in from Churchill Downs where he previously came in 4th in the Bashford Manor. His performance this afternoon earned him 2-Year-Old Male Horse of the Meet. It also gave Steve Asmussen 117 wins and another training title, just in case he doesn't have enough of 'em.

Jockey Chris Landeros won the riding title. Millionaire and winner of the Texas Mile (Gr. 3), Jonesboro was named Horse of the Meeting. And the Dollar Hot Dog was named the Food of the Meeting; Vanilla Ice Cream with Chocklate Sauce came in a close second.
Posted by suebroux at 11:15 PM