Much Ado About Apple Blossom Tickets

Bubbajoe has purchased a dozen tickets for an exciting day at the races at Oaklawn [Racing and Gaming] Park. But instead of being giddy with anticipation, he’s infuriated.

Bubbajoe purchased tickets with expectations to see the Apple Blossom (gr. 1) ... on April 3.

Of course, the Apple Blossom has been pushed back six days in an effort to accommodate Rachel Alexandra and Zenyatta, and it is now scheduled to be run Friday, April 9. Tickets purchased for April 3 will not be honored on April 9 nor will they be refunded.

And Bubbejoe is not alone. 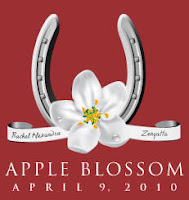 I’ve seen numerous comments throughout blogs and message boards written by folks that snapped up tickets for an April 3 Apple Blossom, with hopes of watching the much-anticipated showdown between Rachel Alexandra and Zenyatta, only to feel cheated when the race was moved to a different day.

I feel bad for Bubbajoe and all the other individuals that are feeling duped and disappointed. If I were one of those individuals, I’d gripe and protest and hope for some kind of compensation, even though the fine print on the tickets probably simply reads, No refunds. No exchanges. All sales final.

Being the concerned horse racing fan and semi-diligent blogger, I contacted Oaklawn's General Manager, Eric Jackson, and expressed my concern about the ticketing flap regarding the Apple Blossom. What was Oaklawn’s perspective? And would there be some type of “horse racing consolation” for April 3 ticketholders, like really great racing and/or cheap beer?

We have been selling seats for the 2010 season since November 1. The primary stakes planned for that particular Saturday (April 3) is always the Oaklawn Handicap. Normally, the Apple Blossom is the undercard stakes (and has not always been run on that day). The majority of seats that weekend were sold well before there was any thought that Zenyatta and Rachel might hook up. In fact, Zenyatta was "retired" until mid-January.

In order to get both those horses in a race, we had to create a new race on a new date. We moved it to our closing weekend to accommodate the two stars. Unfortunately, that is our Arkansas Derby weekend, which has essentially been sold out since late 2009.

So if you have tickets for April 3, Mr. Jackson assures you that Oaklawn “will have excellent racing with the Oaklawn Handicap being our big race that day.” No word on beer specials.

And for April 9 ticketholders, he says they hope to have Zenyatta and Rachel Alexandra there but shares this warning: “There are no guarantees that both stars will be here.”
Posted by suebroux at 12:29 AM

I kinda feel bad for bubbajoe and no olive branch (cheap beer)...who do they think they're messing with?

Aw, the Bubbajoe Dozen can still have a blast at Oaklawn - and may I suggest a visit to the Brau House in downtown Hot Springs where they have Spaten on tap ...

And speaking of 'olive branches', I owe you one [as in cheap beer], Spaceman, for alertly posting the forum of disgruntled racing fans! You deserve the credit for the link .. and I deserve someone dumping a Yoohoo! on my head for not providing proper credit.

bubbajoe can still get cheap infield seats, smoke some dope and have cheap beer, and see drunk girls! cool.

The Oaklawn Handicap. Yipee! I get to see the Fantasy on Friday too!

Any other restaurant recommendations?

Just checked some of those message boards. Let's be serious, I bought four tickets for Friday and Saturday and spent something like $30. I knew I was taking a chance the race wouldn't come off and don't expect a refund. Cheap beer would be nice though...

I reserved tickets to the Apple Blossom for April 3rd pretty much the moment they announced that both horses might run. When they bumped it back to the 9th I reserved tickets the moment they announced the new date. If you rushed to scoop up tickets when the race was announced for the 3rd I don't see why you wouldn't have done the same for the race on the 9th. The tickets for the 9th were nowhere near sold out for the 9th BTW. I had no problem getting mine. Also, if anyone is upset about spending money for tickets on the 3rd, reserved seating is only $4 a ticket so even if you reserved 20 seats you would only be out $80. You guys lose more that on a maiden claimer superfecta.

I think changing the race by week for the sake of one horse was disgusting. I too had tickets for the first date, and could not get any for the changed date,other than from the scalpers. Odds are one of the big wigs will scratch anyway!

It's bad enuff that they have the gaiming machines so tight to up the purse for the apple blossom race & then to rip many off on tickets? Unbelievable! Bubba should be refunded & people should keep wallets at home when it comes to the gaming center.
Arkansans need to vote in casinos & do away with this Oaklawn mess.

I too had tickets for the first date, and could not get any for the changed date,other than from the scalpers.