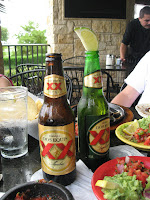 "Good luck, and Stay Thirsty, my friends."
-the Most Interesting Man in the World

Once again, I will post my selections for each of the Breeders' Cup races; selections that utilized extensive handicapping and research and a couple Dos Equis. Additionally, Magic Beer Bottle selections are also posted. Last year proved to be a tough one for both me and the Magic Beer Bottle. Hopes are higher this year to cash in a few more winners.

*Sentimental selection. There's nothing more I'd like than to see her in the Winner's Circle. Of note: Twice Over (ML 20-1) is very appealing and will be included in exactas.

Be sure to stop by the TBA homepage as TBA members and various Twitter-folk have posted their selections for the 2009 Breeders' Cup. Good luck, and Stay Thirsty!
Posted by suebroux at 1:01 PM

... if you can't spell it, you're probably unqualified to comment on it. Grease? 100% canola oil, all real ingredients. Those are facts...

Was it the amber or green bottle?

The Beef Fajita Quesadillas are delicioso!

And to everybody's favorite Weasel: It was the amber bottle. Surprisingly, it flashed some handicapping skills, i.e., Goldikova, Forever Together. But Lisa's Kitten? Don't know about that one ... although she did win in Retama, so there might be some kind of Texas connection there!

Pretty interesting site you've got here. Thanx for it. I like such themes and anything that is connected to them. I definitely want to read a bit more on that blog soon.