I Didn't Win a Media Eclipse Award This Year

Thus, one can conclude that these Media Eclipse judges don't have much of a sense of humor. Doom and gloom. Death and tragedy. Nary a positive spin on horse racing. Clearly, I have no hope in winning a coveted Media Eclipse Award. 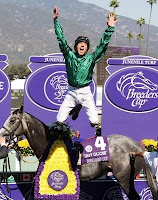 And speaking of Media Eclipse judges, what exactly were those guys drinking when they bestowed the Photography Eclipse Award of yet again another Frankie Dettori Flying Dismount? Yes, Frankie Dettori is a very photogenic sort. He's been gracing the inside cover of the Lone Star Park program for a number of years with the same joyful expression. Subsequently, I rummaged into the Famous Box of Racing Junk I Have Yet to Discard to review my 2004 Breeders' Cup section. And sure enough, Dallas Morning News photographer, Irwin Thompson, snapped a similar photo of the Frankie Detorri Flying Dismount after 28-1 longshot, Wilko, defeated Afleet Alex in the Juvenile. However, I don't recall Irwin Thompson receiving an Eclipse Award. 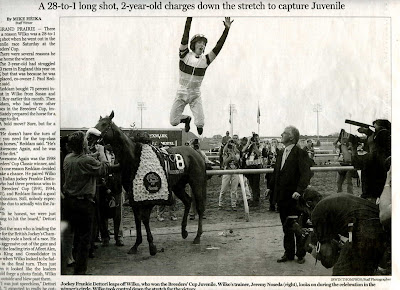 So what makes Matt Goins photograph so monumental? Well, could it be that it is an excellent demonstration of how the Breeders' Cup lacks the ability to use Spell Check? As our good friend, Mr. Not Really writes,

How stupid is everyone in that particular error chain, to let those signs get that far? How does that happen? How can the Breeders' Cup seriously call itself the greatest day in racing?

And another thing. Donativum doesn't have a nose.

Perhaps the NTRA was deluged with a insurmountable sundry of uninspiring horse racing photos not worthy of consideration, such as the following, 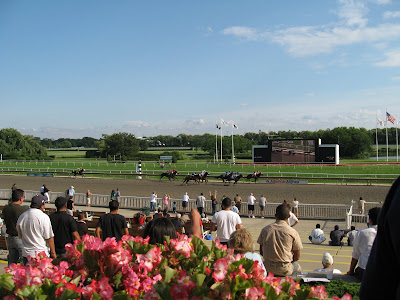 Anyway, the TBA is conducting the TBA Photo Contest Do-Over. It's a great way to start off the new year. So start sending in your Media Eclipse worthy photos which may or may not include the Gary West Flying Dismount or some sort of subject called "horse". Good luck!
Posted by suebroux at 10:20 AM

I particularly like the framing of the maiden claimers with those flowers in the foreground. Very nicely done!

Worthy of honorable mention at the very least.

Thanks for the link, and you should submit something. Beauty is in the eye of the beholder and all that crap!

I am shocked, shocked I say, to read you were in Arlington and nary a call to mix up some Margaritas.

Thanks for the link and happy new year.

Now Sue, don't be greedy; I am sure you won Mom of the Year at your house, a much more important award.

I totally agree! I saw that photo, and thought "Haven't I seen that before?" So sad, there were so many more photos/photographers that deserved recognition... *sigh*