Lights On Broadway Prepares to Leave the Track for Greener Pastures

The grooms call him ‘Superpony’. 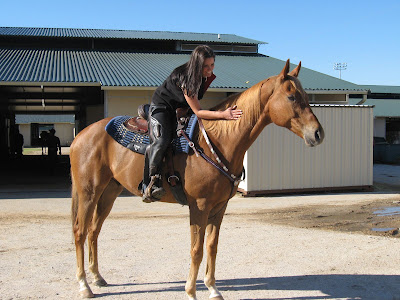 Less than year ago, 2001 Texas Horse of the Year, Lights On Broadway, was purchased off the back of a slaughter truck for $200. And after a few lackluster cheap claiming races, he was acquired by a group of energized horse lovers and shipped off to begin a new career as an off-the-track Thoroughbred, or OTTB, under the excellent care of trainers Donna and Dallas Keen. 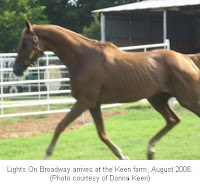 I was fortunate to see Lights On Broadway last September, shortly after he arrived at the Keen farm, just south of Fort Worth. He was underweight and had hoof abscesses, but the heart of the champion remained.

"He knows he’s somebody," Donna told me. "You can tell just by the way he carries himself, perks his ears up and responds to you. He’s exceptionally intelligent."

Indeed, Donna discovered that Lights On Broadway was easy to train for a post-racing career, and had hoped that he might develop into a suitable pony at the racetrack. He also became the inspiration for the Keens’ new non-profit racehorse rehabilitation and placement program, Remember Me Rescue. Dallas and Donna are passionate about finding homes for former racehorses as well as raising awareness about horse rescue.

This spring, Lights On Broadway - ‘Superpony’ - returned to Lone Star Park, but his pony career wasn’t going well. "He has a paralyzed flapper and gets very nervous along with making a quite a bit of noise when galloping on the racetrack," Donna informed me. "Plus he’s really too big for me [at a little over 17 hands], making it hard for me to get on him, or pick up something I might drop. And," she admitted, "he’s not happy here."

So Lights On Broadway will be leaving the racetrack for good and head to his new home: his own 2-acre paddock in Fredericksburg, located in the beautiful Hill Country of Texas. However, before he goes, the champion will be in the spotlight once again – he’ll be featured in the local news this weekend. His final job: demonstrate the importance and success of horse rescue. There is life after racing. 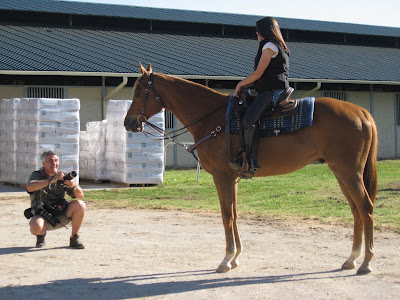 Lights On Broadway, the new media darling of North Texas

It's wonderful that Lights On Broadway's story is one with a happy ending. I wish more of them ended that way. The importance of retraining & finding good homes for former racehorses can't be underestimated.

YEAH! So glad to hear this!!