Fellow blogger, kentucky joe, has been known to take his young daughter out to the races at Keeneland. He writes of how she enjoys the afternoon just as much as he does; bonding over past performances, discussing trainers statistics, observing tote board action, and pooling together their respective allowances to make the best possible wager. Okay, I made some of that up. But they go to the track together and have fun.

I see kids all the time at Lone Star Park. There's usually a group of boys playing touch football on the grassy area along the top of the stretch. Little girls play Duck, Duck, Goose while Mom and Dad study racing forms or place wagers. Even Steve Asmussen brings his 27 kids to the track on a regular basis.

I've brought my own daughter, Sophie, to the track a couple of times. Live racing usually holds her interest for ...oooh, about :45.34 seconds. We'll then progress into meaningful discussions about the movie, Racing Stripes, and how great it would be if a zebra ran against horses, and oh, weren't the flies, Scuzz and Buzz really funny, especially when they fell into the horse poop and cried, "We died and went to heaven!"

However, Sophie is older and wiser now at 7-years-old. It's a little adventure and provides her a wonderful opportunity to escape the clutches of her younger sister. She'll look over a race card, and now that she can actually read, she'll make insightful selections: "I like the names Cat a Cold Eye and Campinout." Observing horses at the walking ring, she'll remark, "I think that gray horse is pretty. Can we bet on him?" It's somewhat premature at this juncture as to whether she'll have a career as a public selector.

Besides wagering on pretty horses and consuming Blue Bell ice cream, we regularly assume the position around the winner's circle with the prime objective of being that "one lucky fan" that receives the Magical, Mystical, Autographed Souvenir Jockey Goggles.

After pictures, handshakes, and weights in the winner's circle, some serious-looking Race Official Sort hands a set of goggles of unknown origin, perhaps the real deal or perhaps a facsimile purchased in bulk from the Oriental Trading Company, to the winning jockey, who then scribbles his name and passes them to a kid. The "one lucky fan" selection process consists of a competition of manic hand-waving and Mexican Jumping Bean imitations to get the jockey's attention. And Sophie was having no success.

So as we were hanging around the winner's circle prior to the Irving Distaff, Gary West, turf writing genius of the Fort Worth Star-Telegram as well as recent fame as the guest interview on Lovedagoat.com, sauntered over to our direction. I introduced him to my daughter and explained our lack of goggles success. "Don't worry, " he said. "We'll be sure to get her a set of goggles." Then the conversation evolved into more important issues, such as the Arkansas Derby and Blue Grass Stakes recap. I made some feeble attempt to sound like a true handicapping intellectual by informing him that my wagering strategy with Sinister Minister was rather profitable but somehow I still felt like a dolt.


After the Irving Distaff presented by Steve! Asmussen (Paz Ciudadana and My Misty Princess finished 1-2), I observed West chatting with jockey Cliff Berry, and subsequently, Cliff took off his race goggles and gave them to Sophie! My daughter's toothless grin was huge! Even I was giddy. Just think! I now have a pretty solid connection to the Who's Who in the Thoroughbred Racing: My daughter now has racing goggles worn by Cliff Berry who rode Elisa's Energy who is trained by Bobby Frankel. 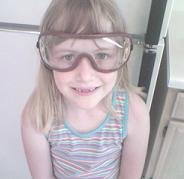 Gary West was incredibly kind to ensure that Sophie was a big winner. I need to find some appropriate way to thank him, like some kind of humanitarian award, or maybe something like a giant Easter Egg filled with Guinness Stout.

Sophie's excited with her new horse racing paraphernalia. And like most 7-year-olds, she has now proclaimed, "When I grow up, I'm going to be a jockey!" Sure, this mother thinks. With her genes, she'll probably grow to be 6 feet tall. Jockey career? Maybe for a Draft animal.
Posted by suebroux at 1:35 PM

There are always kids at Mountaineer, at least if the weather is reasonable. What's funny is they almost always line up by the rail and race. I have no more luck handicapping them than I do the horses, but I think I would benefit from Tomlinson's and dosage figures.

I like Sophie feel that Racing Stripes is a fine film, in my opinion much better than Seabiscuit.

Why Scuzz and Buzz did not get supporting actor noms is beyond me!

Just wait, they grow up so fast, my daughter is now 10 and we have been going to the races with her since she was 7 but now rather than marvel at the colors and the "pretty ponies" she now makes sure I have $2 for the program before we get in the gate and always checks to see that I have a pen and away we go to sit and handicap the first few races. Anyway, she really isn't too bad with looking at the past performances, trainer and jockey and occassionally checking them out at the post parade although she's a bit like her Dad and likes to get those bets down early on! We really like to have a horse or two to root for. Sounds like Sophie is on her way!

I've got to get myself a set of those goggles to wear in the office!

Enjoyed your column. And Sophie looks great in the goggles. -- West