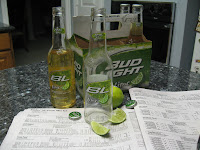 Crack open your piggy banks! Cash in all of your aluminum cans! Dig for loose change under the sofa cushions – and throw out the old popcorn kernels and stale Cheetos while you’re at it. The 2010 Breeders’ Cup World Championships is a mere day away, which means it’s time for Post Parade’s 4th Annual Magic Beer Bottle Breeders’ Cup Selection! This year we salute good friend and fellow blogger, John of Not to the Swift fame, and use the beer of his choosing: Bud Light Lime, proudly proclaimed “Instant Summer” by Hillside Liquor Store.

"My taste in beer is as quirky and eclectic as my taste in subject matter for the blog." [John]

Of note, I enjoyed modest success with my selections last year (5 winners, 4 others in the money). However, the Magic Beer Bottle, still gloating over its 2007 BC Mile Kip DeVille hit, fared poorly last year, Goldikova being its only winner. And who didn’t have Goldikova?

So, without further ado, let’s spin the bottle!

*Our successful selections last year. Let it ride!
**I tossed Workforce - I don't care if he just won the Prix de L'Arc de Triomphe. Refer to the Dylan Thomas history lesson in 2007.

Be sure to stop by the TBA homepage as TBA members and a sundry to Twittering handicappers have posted their selections for the 2010 Breeders' Cup. Good luck!
Posted by suebroux at 1:28 AM

Sue, I want to applaud you, sister. How the hell did you correctly pick Dangerous Midge?!?!? Well done! And nice to see you beat the bottle this year :-)