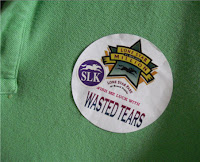 Yesterday was a true showcase of racing at Lone Star Park, Lone Star Million Day, which comprised of six stakes races with purses totaling - I'm just guessing here - $1 million! It's heralded as the richest day of Thoroughbred racing in Texas; its featured races include the $300,000 Lone Star Park Handicap (G3), the $200,000 Ouija Board Distaff (G3) and the formerly-graded-run-on-dirt-but-now-switched-to-turf $200,000 Lone Star Derby!

Under the glorious North Texas sunshine, fans and bettors were treated to some great races and quality horses, albeit no Lone Star Park racing card is ever complete without its usual $4,000 claimer and $7500 maiden claimer races. Regardless, it's a pure delight and real treat to watch and wager on wonderful and talented horses such as Wasted Tears, Irish Gypsy, Game On Dude, Awesome Gem, and two former Kentucky Derby entrants (so duly noted by Kenneth Ramsey) Dean's Kitten and Derby Kitten. Gee, I wish we could be treated to this kind of talent every weekend around here!

Wasted Tears recorded her third consecutive victory in the Ouija Board Distaff (G3), winning by five lengths over Category Seven. FYI: Wasted Tears set a still-standing course record of 1:32.81 for the one-mile distance when she won the 2009 Ouija Board. FYI Part II: Wasted Tears is perfect over the Lone Star Park turf (6-for-6). FYI Part III: Wasted Tears was [obviously] bet down to nothing, paying $2.80 for the Win, ergo she was the only one to make any money, $119,000 first-place prize, increasing her career earnings to $889,598.

Here's Wasted Tears in the paddock ... 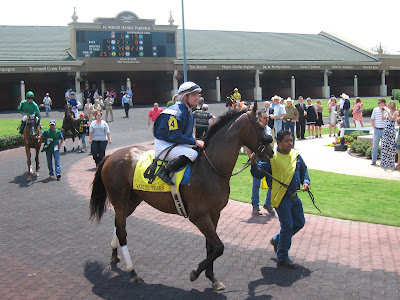 And in the Winner's Circle (Okay, I clearly had to edit this photo 'cause there was a bald guy in the way) ... You know, Lone Star Park should name the Winner's Circle after that mare.

Bob Baffert came to town and brought a trio of horses with him: Irish Gypsy, Uncle Sam, and Game On Dude, with Irish Gypsy being his only Winner's Circle opportunity with the Valid Expectation Stakes. These days, with Texas horse racing toiling away in its troubles, he reminds everyone that it's fun to come to Texas and that Lone Star Park is a great place to race. It was very refreshing for this disheartened Texas racing fan. As far as I'm concerned he can come back any time!

Another highlight of the day was the Lone Star Derby, the first year it's moved to the turf. A very competitive field, however it was a real joy to see hometown favorite and future PGA-star, Chris Landeros win the race aboard Thirtyfirststreet, who somehow was completely overlooked by bettors and went off an appalling 22-1. 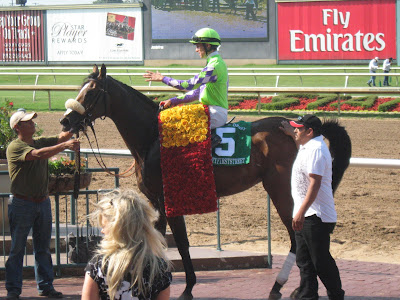 If that little betting oversight wasn't enough to have anybody running for the Pepto-Bismol, there was the 2nd annual Chili Cook-Off competition sanctioned by the Chili Appreciation Society International, Inc., with proceeds benefiting Remember Me Rescue and LOPE Texas. I had the pleasure of judging the competition last year; this year I merely sampled chili from various cooks at my leisure. All for the good causes of taking care of retired racehorses and ensuring my intestinal tract will make it to the next decade. 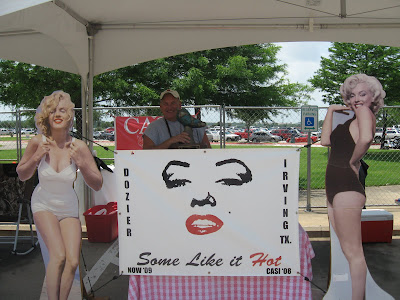 As much as many of you have enjoyed looking at my Annie-Leibovitz-type high quality photos snapped from my Cannon Sure Shot on Lone Star Million Day, I offer up a few exceptional photos from exceptional photographers with exceptional cameras for your viewing pleasure: 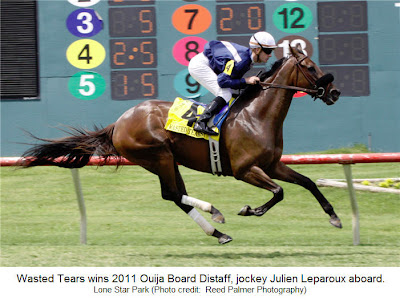 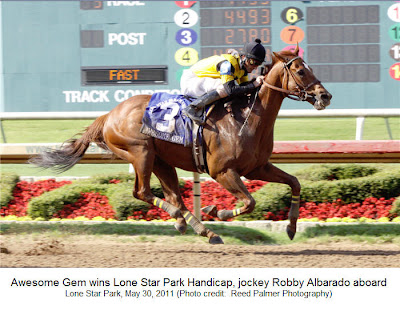 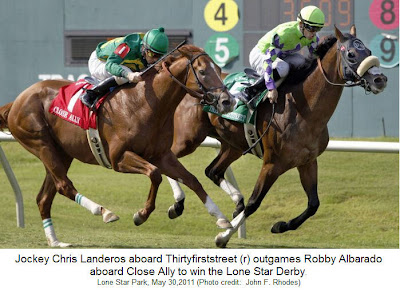 It's Sunday. Post Preakness. Time to open up the Fort Worth Star-Telegram and read what the Turf Writing Professor, Gary West, has to say about Shackleford and Animal Kingdom and any Barry Irwin-ism Derby Day Nonsense addendum. So I flip through the sports section and ... hey, wait a minute ... what the heck??? He's NOT HERE?!?

My initial knee-jerk reaction was that the Professor was clearly caught up in The Rapture yesterday. But just in case, I hunted through my last few copies of the Star-Telegram when I stumbled upon his Friday column,

This is my last column for the Star-Telegram.

The Star-Telegram (motto: Hanging on by our fingernails! Oh boy, wish we'd never bitten 'em!) is a McClatchy newspaper, which is not exactly a financial juggernaut these days. Needless to say, the newspaper couldn't afford 1,427 Dallas Cowboy writers, a Rangers' beat writer, a Mavericks' reporter, a NASCAR/Dallas Stars/Texas lake's fishing report guy, and a reputable turf writer. Someone had to go, thus the reprieve that the Professor received back in 2009 had expired.

Lone Star Park's ownership was officially transferred to Global Gaming Solutions [and their Texan buddies] recently. Global Gaming Solutions, a subsidiary of the Chickasaw Nation, is no slouch when it comes to successful gaming, as clearly demonstrated by their mega-super-uber-successful WinStar World Casino at Exit 1, Oklahoma. They had purchased the foundering Remington Park in Okie City and immediately turned it around; increased attendance, increased handle, increased happy horse people. Lone Star Park is anxiously awaiting its turn - nay, Texas horse racing is waiting its turn! This has the potential of being something really big and really special!

But now who's going to write about it?

If no one writes about it, will Texans even know about it?

I'm not a journalist, merely a happy-go-lucky-blogger-who-enjoys-way-too-many-frozen-margaritas-on-a-hot-day, struggling to communicate a smidgen of useful racing news. For example, here's a my current report involving Global Gaming Solutions' acquisition of Lone Star Park,

Lone Star Park, Grand Prairie, Texas - On May 13, 2011, Lone Star Park ownership was officially transferred to Global Gaming Solutions. You know, this reminds me that I had a dream the other night that Michael Chang, [insert title here 'cause I don't feel like looking it up] of Global Gaming Solutions, showed up at the racetrack wearing a Hawaiian shirt, shorts and flip-flops, and bought frozen margaritas for everybody on the patio! One helluva dream! Woohoo!

Texas horse racing has a future. But Texas horse racing needs someone to write about it. Here's hoping that Gary West and all things flapdoodle will be showing up somewhere, sometime soon ...
Posted by suebroux at 11:56 PM 2 comments:

No feelings of friggatriskaidekaphobia here.

Friday the 13th, a day associated with bad luck or really dumb slasher movies, is a day met with great hope and anticipation for the Texas horse racing industry. Well, at least this particular Friday the 13th. For today, the Texas Racing Commission is meeting in Austin and item No. 1 on the agenda is (after coffee, donuts, roll call, and “general business”, of course),

Global Gaming is a subsidiary of the Chickasaw Nation, located in Oklahoma. In recognition of the impending ownership transfer, I would like to offer up this most valuable and useful phrase,

And if the potential ownership transfer isn’t exciting enough about today, it’s Party at the Park with $1 beer, and tonight’s featured band is the best Beatle Tribute band in all the land – Hard Night’s Day.
Posted by suebroux at 12:15 PM No comments:

Will the Real Jockey for Animal Kingdom Please Stand Up

On Sunday, I enjoyed perusing all the Kentucky Derby coverage and stories. Regardless of the fact that I'm a homer, I had to admit that Gary West wrote one of the best pieces about Animal Kingdom's victory and how the pieces fell into place - one disheartened trainer, two misfortunate jockeys, and a team of owners who made a business decision.

“It was unfortunate I got taken off the Derby winner,” said Albarado

Umm, what?? Robby Albarado was not removed from the Derby winner, he lost his Derby mount - a long shot to boot! Animal Kingdom did not become the Derby winner until he crossed the wire first. And when he did, Johnny V just happened to be in the irons.

Interestingly enough, a simple observation of Animal Kingdom's previous races clearly indicates that Albarado was not his "regular" rider. In fact, there appears to be no "regular" rider at all. He's had four different jockeys in four races. It seems to me that if there had been a "regular" rider for the Derby, Motion and the owners would've snagged Alan Garcia, who guided Animal Kingdom to victory in the Spiral Stakes. But he's Soldat's rider and was already committed to him in the Derby. So, in my opinion, Garcia has a reason to be pissed off, too.

Yes, it's lousy Albarado lost his Derby mount but Barry Irwin and the teeming millions of Team Valor probably didn't possess an overwhelming cause for loyalty to Robby; they were making a decision that they thought was in their best interest (read: winning). Just business.

Irwin and Velazquez both said that they wanted to "make it up to him" in some way. That's a task that takes a lot of creativity. Sure, they can write a big, fat check to the Robby Albarado Foundation to Eradicate Homelessness in Louisville or underwrite his next golf tournament, but that still seems like a pretty feeble "make it up to him". What could possibly be "make it up to him" quality?

All aside, Graham Motion, Johnny V, and Team Valor should revel in Fate as it sweeps them into Pimlico.
Posted by suebroux at 8:04 AM 5 comments:

It’s time to go on record and make my selections for the 137th Kentucky Derby Presented by Yum! Brands. And with the aid of a mint julep or two, these Derby picks may not look too bad by post time.

I’m a fan of both Archarcharch and Nehro. Unfortunately, with sort-of-favored Uncle Mo scratched, their odds will be lower than originally expected. And of course there is that pesky little Derby statistic regarding their post positions. So I’m in need of an intriguing and worthy longshot or two that I’ll box and/or wheel with my two Derby favorites.

Originally, my thoughts were captured by Sunland Derby winner, Twice the Appeal, with a morning line of 30-1 and Churchill Downs’ Jockey Extraordinaire, Calvin Borel in the saddle. Borel had pulled off a stunning upset a couple of years ago aboard Mine That Bird and there remains the possibility of him pulling that stunt again. Well, apparently everybody else had that same idea as I see his odds are currently at a gaudy 7-1! Ridiculous! No Appeal there ...

So I’ve settled on Animal Kingdom (current odds 23-1). Although he’s lightly raced, he’s been consistent and I like his pedigree; he’s bred to run all day. And his trainer, Graham Motion, is going gangbusters. If his odds remain nice and fat, I’ll probably toss in an across-the-board bet on him, too.

Mucho Macho Man (currently at 12-1) will also enjoy a little attention at the pari-mutuel window, and will be considered for my exotics.

Have a great Derby Day! Good luck!
Posted by suebroux at 8:17 AM 8 comments: 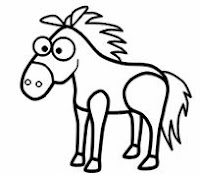 After many, many long and laborious weeks of the never-ending Triple Crown Mania and copious beer consumption, I had actually selected my potential Derby horses for the 137th Kentucky Derby presented by Yum! Brands.

And then there was the Derby draw.

What's a bettor to do? According to Kentucky Derby history, Post 19 doesn't exactly have a glowing record of producing winners. As a matter of fact, it has never produced a winner. Neither has Post 17 for that matter, which is kind of bad news for Soldat.

And of course, Archarcharch landed in the dreaded 1-hole, where the onslaught of the prevailing cavalry charge to the first turn could push him up along the rail and maybe shuffle him back and provide enough traffic woes that his best alternate route would be I-64 through downtown Louisville. However, all may not be lost for Archx3. Post 1 has produced 12 winners since 1900, the last being Ferdinand 1986. And before that, you have to go back into your Way Back Machine, to Chateaugay (1963), albeit there was only 9 horses in the 89th Kentucky Derby - hardly a cavalry charge.

So now I'm faced with many, many long and laborious hours of never-ending handicapping and copious beer consumption - and maybe an antacid or two at this juncture - as I prepare to watch and wager the Kentucky Derby.
Posted by suebroux at 9:26 AM No comments: