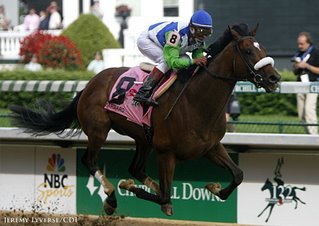 Barbaro proved he was a remarkable horse last spring when he scored one of the most dominant victories in the 132-year history of the Kentucky Derby, but the courage he displayed in his fight for life since his injury on May 20 proved that he was more special that we could have possibly imagined on the first Saturday in May.

In case you are new to this blog (and if you are actually reading this, you are not) I have a daughter, Alice, who is in pre-school. And what is even more surprising, is that a pre-schooler is a great muse for a horse racing blog.

At my daughter's pre-school, they participate in a game called The Same Game. The whole object of the game (on a 4 and/or 5-year-old level) is to identify two of three listed objects as being the same and/or similar.

Sky and Sea would be the same because they are blue. The Sun is yellow (or orange, whatever the pre-school of choice is using). Ergo, sky and sea are the correct answer.

I thought to myself, "What a great game! I think I will steal that idea for a blog!"

Question 1. Which two items listed below are the same and/or alike?

If you said Edgar Prado and Javier Castellano you would be correct because they are both jockeys and we all know that Lee Trevino is the Speaker of the House.

Question 2. Which of these are alike?

Okay. This is a no-brainer. Although all three are established handicappers, we all know that Katie and Jenna are the sexy Beulah Twins. Although David Grening is known to be "sexy" in many a handicapping circle, he is clearly not "the same" as either Katie or Jenna.

Next question. Which of is these are alike?

Final question of the Same Game. Below are three quotes. Two of them pertain to the 2007 Triple Crown. Which two quotes are the same and/or similar?

A year ago today, Barbaro never had raced on dirt, Bernardini never had seen the inside of a winner's circle, and Jazil had kept company with nothing but maidens. [Gary West, Star-Telegram, January 14, 2007]


At this time last year, Barbaro, winner of the Kentucky Derby Presented by Yum! Brands (gr. I), had never run on dirt, Preakness (gr. I) winner Bernardini was still a maiden, Belmont (gr. I) winner Jazil had won only a maiden race ... [Steve Haskin, Bloodhorse, January 16, 2007]


Stephen Dedalus, displeased and sleepy, leaned his arms on the top of the staircase and looked coldly at the shaking gurgling face that blessed him, equine in its length, and at the light untonsured hair, grained and hued like pale oak. [James Joyce, Ulysses, 1922]

Submit your answers accordingly. Bonus points will be distributed for original content and ideas.

Thanks for playing the Same Game!
Posted by suebroux at 10:42 PM 1 comment:

When Your Last Wish Does Not Include Plastination

Recently, I encouraged a lively discussion regarding plastination and this has given rise to a variety of issues that I feel must be addressed. The first issue is that I really need to get myself to the track so I can actually write something "informative" and "useful" regarding horse racing. Secondly, what is the opinion of racetrack officials and groundskeepers regarding plastination? And what if a person's last wish is not plastination but instead cremation with ashes scattered over a racetrack?

Surely, many horse racing fans have probably had a "Last Wish" to have their ashes scattered over the oval at Churchill Downs or Saratoga. I decided that this topic required some serious research, so I immediately went to the internet. After spending a couple of hours on eBay and reading General Hospital's Scoops & Spoilers, I discovered that there is little information regarding this topic. Thus, I opted to email my "insider" from Magna, Drew Shubeck, the Vice President and General Manger of Lone Star Park. I asked him what track facilites thought of this issue. He replied,

When I worked at Monmouth Park I can recall several instances where relatives scattered ashes and stayed for a day at the races. Most hosted remembrance parties at the track to honor the recently departed and for some the remembrance parties became annual traditions.

Therefore, from my email from Mr. Shubeck, one can extrapolate the findings that racetracks, NTRA, MEC, and Monmouth Park, have no set rules regarding the scattering of ashes at racetracks, except that it would probably benefit the mourners to bring along a copy of the Daily Racing Form while Uncle Festus is scattered along the backstretch between the second and third races on the card.

Furthermore, this notion of a Last Wish of scattering one's ashes raises a few issues: (1) Can ashes be scattered on synthetic racing surfaces, i.e., Polytrack, and still be considered as "returning to dust", (2) by what mechanism are ashes scattered at a racetrack - horse, tractor, jockey, etc., and (3) how much would Trevor Denman charge to provide a quick eulogy between the 4th and 5th races on the card?

Obviously, this is a subject that will require much pondering and philosophical discussion will sipping a fine Merlot. But in the words of Mr. Shubeck, who, by the way, will probably never hold down a job as a funeral director,

I may be biased but I can't think of a better place to be laid to rest or have a party.

Horse Racing Comes to Mind When Packing a Barbie Lunchbox

This morning was a morning just like every other morning in this household: A flurry of activity between brushing hair, making lunches, locating missing shoes, and hollering, "Get down here and eat your breakfast or you'll be late for school, Little Missy Cupcake!". But somehow, in the usual morning mania, my pre-schooler, Alice, opted to work in a little quality Mommy-n-Me time:

Alice: Hey, Mommy. Can I tell you a joke?
Me: Oh, sure.
Alice: Knock knock.
Me: Who's there?
Alice: Bird
Me: Bird who?
Alice: Bird go tweet-tweet and then he go fly up in the sky and poop on your car. (giggle-giggle-titter-giggle)

I gave the consolatory ha-ha and proceeded to educate my daughter in the delivery of Knock Knock jokes. "Sure, Bird go tweet-tweet and then he go fly up in the sky and poop on your car can be funny but the punch line is supposed to be something catchy. Something like ..." and I said the first thing that popped into my head, "Birdbirdistheword."

Birdbirdistheword, winner of the $1,000,000,000,000 Delta Jackpot at Delta Downs, which is located "somewhere in Louisiana", is on the road to the Kentucky Derby. And fellow blogger, great friend and YouTube stockholder, John of The Race is Not to the Swift, is following this colt in his bid to be the next Triple Crown winner. Be sure to visit the Birdbirdblog.

There is nothing quite like the holidays when a crush of relatives descend upon you and eat you out of house and home and consume all liquor on the premises including the forgotten bottle of Goldslager that your neighbor bought for you three years ago. And occassionally, this crush of relatives from all around the country look to you for some exceptional Texan hospitality and subsequently expect to be entertained.

Such was the case a few days ago. As I mentioned in my previous blog, I incurred the responsibility of conducting a tour for my visiting brothers, Raoul and Pepe, and my sister-in-law, Margarita Snoffleglass. Please note that the names of the family members have been changed to protect their identities. Our first stop of the day was attending the somewhat controversial Body Worlds exhibit that is currently in Dallas. Just to refresh your memory, Body Worlds consists of dead people that have gone through the process of plastination. It was invented Gunther von Hagens. And after much contemplation, I cannot reason why any individual would say to himself, "When I grow up I want to plastinate people and sculpt them into weird art forms and attempt to pass it off as science."

Now, many of you are probably wondering to yourself, What does plastination have to do with horse racing other than it is speculated that Todd Pletcher's hair may have gone through the process? Good question. Admittedly, I am not the first horse racing blogger to mention "plastination". The reputable Fran Jurga of Hoofcare & Lameness Journal brings this topic up in a November blog entry:

We will also have a museum display (sorry, not for sale) of plastination anatomy models (a la the "Body Worlds" museum exhibit)

Ms. Jurga's mention of plastination certainly lends credibility to the relationship of the plastination and racing. Perhaps one day, Andy Beyer could become a plastinate with a racing form in his hands, entitled The Handicapper.

Raoul is a regular reader of my blog. Or is it Pepe? I forgot which name I called my brother, Chuck. Anyway, my brothers and Marcia ... oops, I mean Margarita Snoffleglass ... wanted to learn a little bit about racing, handicapping and wagering. So we ventured over to the Post Time Pavillion at Lone Star Park for some simulcast action on the races at Santa Anita.

Not having access to Horse Racing for Dummies that our friendly, neighborhood Quinella Queen once reviewed, I opted for my simple handicapping tips that even a plastinate could appreciate: (1) Bet on the fastest horse, and (2) Bet to win.

The first race did not provide for much success, and I'm unsure if it was the fact we were all much too involved in drinking beer and making jokes about certain individuals that should be plastinates. But the next few races were somewhat more lucrative, especially when Raoul decided that he wanted to learn how to make an exotic wager with a dollar. Thus, the $1 Exacta Box chapter was introduced by the third race, with the tip: (3) Box your exotic. This proved profitable for Raoul as he won $15 in his exacta. And apparently, I elected to ignore my own handicapping tips as I piddled around with a trifecta on the 4th race; a 2-year-old maiden claiming with a number of first and second time runners (my personal favorite). I did not box my trifecta and the 18-1 longshot, Omi's Back (Yes It's True) that I wheeled in the second and third positions won. $508 that $1 trifecta paid. It would have covered the bar bill and then some. Grrr.


My brother Paul, er, Pepe, is pretty good at reading a racing form. Our final race that we bet on, the horse he pointed out to me, Brag (IRE), was going off at 16-1. It was a nice little turf race and guess what? Brag won ($35.40). However, Pepe ignored my second tip of bet to win. He had bet to show.

Plastination and simple wagering strategies aside, the relatives have all gone back to their respective corners of the US and it's a new year. Happy New Year to all. (Happy Birthday if you're a horse). And remember, Gulfstream opens tomorrow for some great winter racing. It's great not to be a plastinate.
Posted by suebroux at 7:36 PM 6 comments: