Lone Star Park opened its 14th season this evening and, it appears, it will be MEC’s swan song in Texas horse racing. Last week, Global Gaming submitted its application to the Texas Racing Commission to acquire the ownership license of Lone Star. Global Gaming isn’t the owners yet. But, if I may be so boldly optimistic, I was under the distinct impression this evening that the current Lone Star’s team is putting a little more effort into its final furlong. 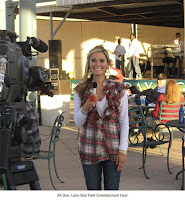 According to reports, there’s to be a kiosk to assist newcomers to horse racing. And dollar beer - $1 Beer! - specials on Friday nights’ Party in the Park. And they hired an “entertainment host”, Ali Dee – she’s cute and perky and her mission is to make it “hip” to be seen at Party in the Park. And they have a cool line up of bands. And there’s 60 days of horse racing, replete with the Lone Star Derby, Lone Star Millions, and two days of fireworks extravaganza for the 4th of July!

Well, this evening I didn’t find any kiosk for newbies but I did run into Drew Shubeck, the President, General Manager, and Best Dressed Executive of Lone Star Park. He in turn, kindly introduced me to his equally dapper companion, Michael Chang of Global Gaming. At that moment, I was happy about three things:

Anyway, we all had a pleasant albeit brief conversation – Drew Shubeck appreciated the fact that I wrote complimentary things about Lone Star’s bathrooms, and Michael Chang announced that he would be at Oaklawn for the Apple Blossom (“I have a ticket!”).

I also ran into Gary West as he was making his opening day rounds throughout the facility. We both rather groused about the state of Texas racing, lamenting that there had been a wonderful opportunity to do something to captivate North Texas after the track hosted the 2004 Breeders’ Cup. But alas ...

Oh, and I ran into Railbird Roy, who I hadn’t seen all winter. His prediction is trainer Bret Calhoun will win the Training title this year as he’s been putting out some speedy critters.

Traditionally, the first race of the meet is the Premiere Stakes for Texas-breds. The race was won by the talented 3-year-old gelding, Coyote Legend, trained by Bret Calhoun. Coyote Legend had won his last three previous races, most recently the Jim's Orbit Stakes at Sam Houston. And it was fitting to see the Scharbauer silks in the Winner’s Circle at the beginning of the meet. 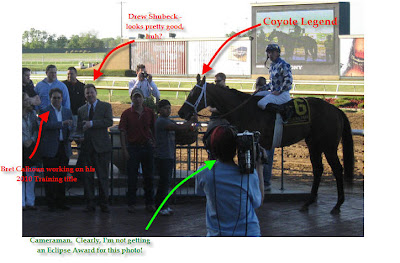 I'm giddy and optimistic, regardless of the woes that face this region. Be it sagging purses or impending changes in ownership, it's time to get hip to Texas horse racing.
Posted by suebroux at 11:21 PM

Clearly much air time to the dude in the black cowboy hat.

Whatever happened to equal time?

Thanks for the compliment on the "photo". Truthfully, every picture I took on Opening Day stunk: blurry figures in dark shadows or outstanding head-shots of anonymous grooms and/or media-types walking directly in front of me at click!

And as for Dave Appleton - he's kind of cute, as paddock handicappers go. If Ali Dee points out a live longshot or two, (Okay - I know that's not her gig!) I'm all for her scoring more air time!

Ali Dee looks ok but You Sue would be so much better as the Hostess, with your whit and racing insite you would get the fans all stired up along with the 1$ beers!!

Thanks for the kind words about Lone Star.

In the winner's circle photo I am handing the trophy to Ken Carson, the stable manager for Clarence Scharbauer. Bret was not in the picture.

Yes. Dave Appleton.
That name's eluded me for ages.

I bet he gets calls for autographs from fans who think he's Bennie Wooley jr.

Apparently, no, you're not getting an Eclipse for your photo. While Drew looks dashing, Brett is evidently at an Applebys. But, I must admit, if I ever need the women's restroom, I will go to Lone Star!!

Hey! I have to agree about Bret Calhoun, he was on fire while at SHRP. I think he'll continue to do well, he just had 2 winners again last night.

I am already having racing withdrawals since TB racing moved up to LSP (I don't do QHs)... so maybe I'll come visit and we can meet!

Drew: Thank you for correcting my mistake. My apologies for the error. I'm fairly certain that Bret Calhoun will have plenty of opportunities to have his photo taken in the Winner's Circle this season.

Angela: Let me know when you hit town - first round of frozen margaritas are on me!

And my golfing pal, Michael, I can't afford your bar bill unless I have lots of winning tickets ;)
One round of frozen margaritas is QNS for you!

Holy cow! He's well on his way to that trainer title! FIVE wins and one 2nd last night!!!! WOW.

Great info on the old Park. Thanks for keeping an old jock up to date on the spectator side of racing:)