Recently it was reported that baseball’s Alex Rodriguez tested positive for performance-enhancing drugs back in 2003. Subsequently, A-Rod confessed to having used banned substances and steroids while he played for the Texas Rangers.

Press release – The Ban Asmussen from Racing Faction, or BARF, announced today that they have conclusive information that links trainer Steve Asmussen with the use of banned substances. BARF President, Edgar Noodlemeyer, said, “Evidence indicates that Lone Star Park in Grand Prairie is 6.45 miles away from the Ballpark in Arlington. In light of the disclosure that A-Rod was using performance-enhancing drugs during his stint with the Texas Rangers, we can conclude with 97.6422% certainty that Asmussen’s horses stopped by the Rangers’ clubhouse on their way to the racetrack.” 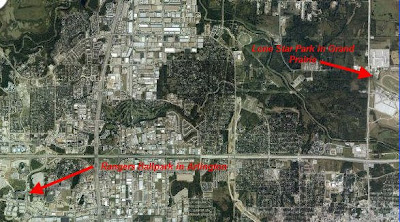 Of course I am just making this up. Everyone knows that traffic on I-30 is terrible and there would be no way for the horses to make post time.

Anyway, the A-Rod incident provoked thoughts and discussions about horse racing’s on-going medication problems. International racing consultant, E. Abraham Ola, wrote a thoughtful essay on The Blood-Horse that calls for the return of America’s once drug-free iron horse days. Bill Pressey writes a blog, The Science of Horse Training; he offers up advice to prevent bleeding and perhaps eliminate the use of Lasix,

Don't let Lasix do all of this work for you, fine tune the training process

Numerous comments throughout posts and message boards sound-off in favor of eliminating drugs altogether. Hay, oats and water. However, there shouldn’t be opposition to good veterinarian care. So somewhere in this murky madness of medication there must be some kind of reform or resolution.
Posted by suebroux at 10:32 AM

Is Michael Phelps a member of BARF?

Hey, there is new code for a widget version of the standings, if you don't like the widget there are new standings, go to the TBA widget page, click Get this Widget, below the standings. The standings you have up don't have the newest ads. let me know if you make any changes.
patrickjpatten@yahoo.com