After suffering through weeks of post-Breeders' Cup malaise, I started the New Year feeling refreshed and rejuvenated.

So I immediately took a week off.

But now I have a solid toe-hold into the New Year so let's see what's new for 2012, as well as the rapidly approaching Chinese New Year, 2012 being the Year of the AARP Card.

2. A sordid variety of Eclipse Award voters have taken the time to publish their thoughts and commentaries as to how and why they voted for the prestigious Eclipse Awards. After reading how many of the voters cast their ballots, I can safely predict that Horse of the Year will be either Zenyatta or some other horse that actually raced in 2011.

3. Gulfstream Park started its meet in December which, I don't know about you, kind of wobbled my internal calendar. No word as to whether or not it will affect the Chinese New Year. Regardless of what I term The Calendar Effect, it appears to be a popular decision. Additionally, on New Year's Day it featured the inaugural running of the $ 100,000 Gulfstream Park Derby, the first derby in the country for 3-year-old colts. The race was won by Reveron, immediately catapulting him to the top of Steve Haskin's Derby list.

4. Speaking of Derby lists, Post Parade's pal, Gary West, is now a contributor at espn.com. Unfortunately, it is not the easiest column to locate. However, he recently posted his own list of Top 20 Triple Crown "noisemakers". Reveron and Steve Haskin didn't make the list.

5. On Friday, Hot Springs, Arkansas, turns into a horse racing mecca when Oaklawn Park begins its meet. Gone from the popular meet is Terry Wallace calling the races, with the announcing duties turned over to his long-suffering-dammit-Terry-when-are-you-going-to-retire-so-I-can-have-a-turn understudy, Frank Mirahmadi. Meanwhile, it appears that Mr. Wallace has taken to blogging with gusto!

6. The Not-so-Naughty New Yorker, Ms. Genaro of Brooklyn Backstretch, is on a bold turf writing conquest. She's now a contributor to Forbes.com. Forbes used to be for geeks and nerds. When did Forbes get hip and cool?

7. And when it comes to hip and cool, our local simulcast digs at Lone Star Park has been renovated, renamed, and reopened. Horseplayers of North Texas have not suffered the fate of those who toil away at Aqueduct as the newly christened "Bar & Book" (formerly known as the Post Time Pavilion) recently opened its doors. The facility features a new expansive Sports Bar with a colossal TV screen, hundreds of individual racing carrels with individual 19" flat screen televisions, and - my favorite - big comfy club chairs! Betting has never been so comfortable! 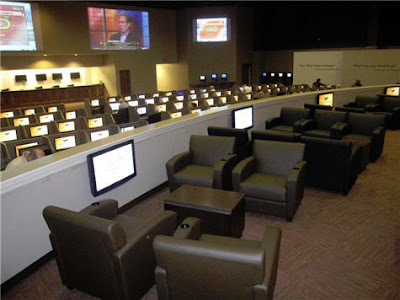 I invite you to peruse the photos on Facebook. It's truly a remarkable venue. And it's free! The grand opening gala is January 12th, by invitation only. Clearly, my invitation to cover the event was lost in the mail or perhaps displaced by The Calendar Effect.

Regardless, this New Year is off to a pretty good start.

"Bar and Book" sounds like a library with a liquor license, which might just be the place of my dreams. A groovy simulcast area a close second...

Thanks for the mention, and happy new year!

I miss the old photo (I still have the original and negatives). Refresh my memory. Is that a 'Vette or Omni?