The Road to the Super Bowl Goes Through Lone Star Park

Generally, the exciting happenings at Lone Star Park this time of year is the $5 Grilled Turkey Melt special offered on Wednesdays in February. However, today - Super Bowl Sunday - tens of thousands of people streamed into the racetrack grandstand. The crowd was loud and boisterous; giddy with anticipation. The excitement! Yes! They were at Lone Star Park ... to pick up their credentials, board buses and head over to Cowboy Stadium in Arlington to work the Super Bowl.

I felt a great need to capture this bit of the Super Bowl hoopla being held at the racetrack. So I enlisted my good friend and neighbor, Gimpy, to record all the action.

Gimpy is a professional ticket-taker at Cowboy Stadium. And he's an usher at Rangers Ballpark. And he does lighting for a small local theater troupe. And he's a part-time actor, most recently earning rave reviews as Vinnie in The Odd Couple where he famously voiced the line, "Oscar, it's your deal," and then accidentally knocked all the poker chips off the table.

However, today I learned that Gimpy is not a photojournalist.

I was rather amazed by the first image that he sent: J Lo and Randy Jackson! I can't believe they were there at Lone Star Park before the Super Bowl! Wow! 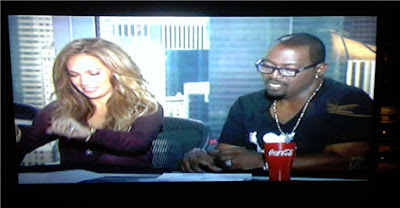 Okay, here's a photo of the Game Day briefing on the third floor of the grandstand. Clearly, Gimpy is indicating that this was the only space available in the grandstand. 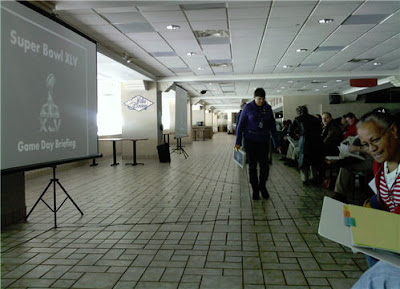 And finally, here's some kind of "crowd" shot. Too bad they couldn't incorporate some kind of handicapping seminar for these folks. 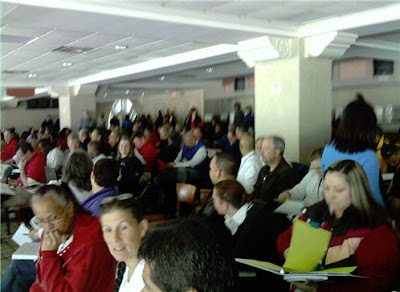 Sadly, this exciting February action of Lone Star Park was not fully realized in this photo essay. But the National Anthem auditions are coming up on February 22nd. Maybe another chance for Christina Aguilera to get the song right.
Posted by suebroux at 11:12 PM